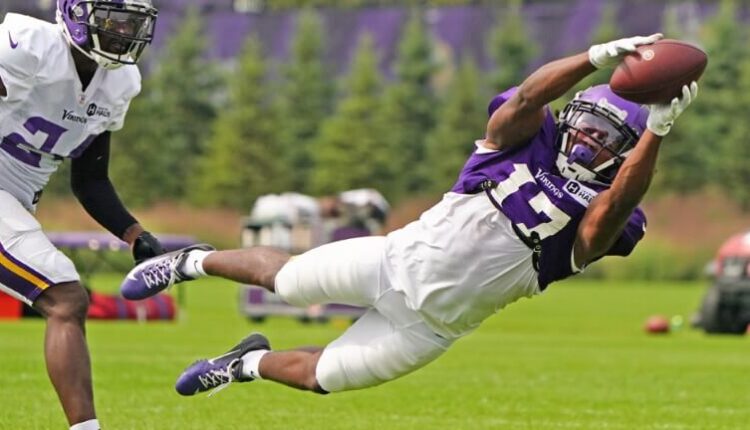 The waiver wire has come and gone. You’ve spent your FAAB dollars. It’s time to dig deep and look at the matchups to decide how to construct your starting lineups for NFL Week 14 of the fantasy football season. We’ve got you covered, friends. Let’s get into the top Week 14 sleepers and streamers!

The 24 year-old is thrust into the spotlight as it looks like Adam Thielen is going to miss the next few weeks with a high ankle sprain. Admittedly, Osborn is someone I picked up early in the season as he posted a 15 targets and 167 yards and 1 TD in his first two games, with a seemingly prime of his career Kirk Cousins. That production faded over time, and I eventually dropped him. This past week, however, he gave 7 targets with 4 receptions and 47 yards and 1 TD. He’s the 2nd receiver in this offense now, and it makes perfect sense to scoop him up.

The Raiders don’t like to give Josh Jacobs the entire load. While he’s still their unquestioned lead back, and even starting to get plenty of targets, the Raiders will rest him for spells at a time. Kenyan Drake has broken his ankle, Richard is on the COVID list, and that leaves Peyton Barber. Earlier this season, he gave us a career best 23 carries for 111 yards and 1 TD. He’s certainly capable of giving us a great performance, and if you’re hurting at RB, he might be able to give you another one against a Chiefs defense that I wouldn’t bet on.

Copy and paste what I said about KJ Osborn above. Kirk Cousins is in rare form, and we should be taken advantage of Adam Thielen’s injury, as opposed to crying about it. Osborn is the 2nd receiver and Conklin is probably the 3rd receiver in this offense, despite being the team’s tight end. He’s been a reliable target for Kirk over the year with 3 TDs, 47 catches, 64 targets, and just under 500 yards. Conklin is capable of a big game, and hopefully we’ll get it against PIT.