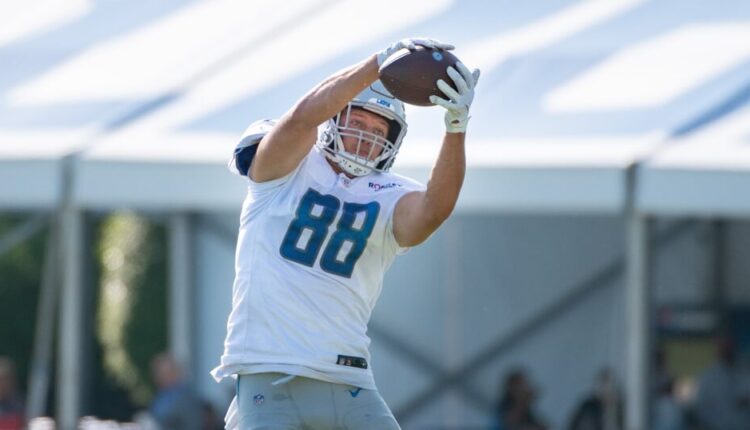 Obviously, we are all excited for the 2021 season. Even for myself, this excitement can drive us to believe and buy in to all the positivity surrounding players, teams, and situations around the NFL. It’s even more exciting when we hear news on players that we had a good gut feeling about early on. Once reports and news come out of camp, it’s easy for us to adapt to the good and shy away from the bad. A commonly used phrase in the Fantasy Football community is “Pump the brakes”. It fits in a lot of cases for us Fantasy Football players as we see our favorite guys tear up training camp. Without sounding cliché, let’s look at some potential fantasy football busts and situations where we should take a step back and slow down our excitement, just a little.

Pump the Brakes on these Fantasy Football Busts

This is more than likely going to be an unpopular opinion. I am by no means “out” on T.J. Hockenson. His draft price unfortunately seems to be getting a little too steep for my liking. A lot of value comes from opportunity and target share, Hockenson should have both of those in his favor for 2021. The question is, what does that mean in his situation?

Last season, in this 5-11 Lions offense, Hockenson was second on the team with a 19% target share. That looks good on paper, yet it netted him an average of 6.3 targets per game. Even further, he averaged 4.1 catches and 45.2 yards per game. I know, you want me to stop thinking about 2020. But it’s not like he wasn’t targeted last season. He had a good statistical season, and if he merely repeated those numbers, he would be a good fantasy tight end this season. However, as we know, things are not the same in Detroit.

You might think the loss of Marvin Jones and Kenny Golladay is sure to boost that 19% target share number. Let’s not act like Golladay had an impact at all in 2020. Marvin Jones is a good player but losing him isn’t going to automatically funnel targets to the tight end. Jones didn’t even work the same area of the field as Hockenson will in 2021. Sure, they don’t have an accomplished wideout in Detroit, but they do have a lot of options at the wide receiver position. Breshad Perriman, Tyrell Williams, and rookie Amon-Ra St. Brown will certainly do enough to replace Marvin Jones’ production from last year. More options give Jared Goff the ability to spread the ball. Especially when defenses start treating Hockenson as the Lions’ best receiving option.

With a downgrade at quarterback and more defensive attention towards Hock, even if his volume increases, the efficiency may take a hit. Any hit to a 66% catch rate clearly wouldn’t be a positive, especially in an offense that we project to be low-scoring. Without red zone opportunities, it will be hard for Hockenson to live up to his current ADP. In order to do so, he would have to carry his production in PPR with a high number of catches, 4.1 per game won’t get that done. Don’t fade T.J. Hockenson the player, especially in this TE landscape. Let’s just pump the brakes on a 4th/5th round ADP with plenty of talent to help our teams still on the board.

Might as well keep it rolling with some more industry favorites that I think we should pump the brakes on. I don’t know about you, but I drafted plenty of rookie running backs in 2020. Our recency bias of course has us super excited to take the same shots on rookies in 2021. I know I will be grabbing some, but for this season it is important to find the value in these high upside rookies, not catapult them in ADP like we did with Clyde Edwards-Helaire in 2020.

Once again, this is not about Travis Etienne the player. He was one of my favorite players throughout his college career. I have been consistently seeing him taken in the fifth round. I don’t love it. It is hard to believe that stepping onto a team that already has a 240-carry and 60-target running back is going to lead to immediate fantasy production. There has been nothing to indicate James Robinson will be taken off the field in high-value touch situations. New head coach Urban Meyer has reiterated the fact that he wants to be a hard nosed rushing team. That more than likely means absolutely nothing, but they did add additional rushing depth as well. It’s hard to envision Etienne averaging over 10-12 rushes per game.

At 61st overall in PPR, Etienne is going right in the range where I like to attack the wide receiver position. Guys like Ja’Marr Chase, Brandon Aiyuk, and Kenny Golladay are going right around Etienne in PPR. I’ll take the upside at the WR position over running backs with uncertain workloads, especially in PPR. Etienne will more than likely take a couple weeks to find a steady role in the new Jags offense. I prefer him in a spot where I can give him that time to develop into a starter on my fantasy team. Unfortunately, this ADP does not permit that roster flexibility.

Year after year it’s almost a unanimous rule to pump the brakes on the QB1 in overall ADP. I haven’t even looked at Mahomes’ ADP in quite some time, because I usually just skip over it. However, it was worth reminding you that taking a quarterback before 20th overall in a 1QB league is not a reliable strategy.

These are potential league winners at positions where a clear advantage will help you win a championship. We could go down a long rabbit hole on quarterback value, but I just wanted to remind everyone that this is an ADP we should be fading. Even if he is the best QB in the league.

This pump the brakes makes me sad. I have always been a huge fan of Adam Thielen and I still am. His production speaks for itself. I’m just not a fan of his current value in drafts, especially compared to the guys going around him. Unfortunately for the 30-year-old, there are young potential superstars going right behind him in ADP. Cooper Kupp, DJ Moore, Diontae Johnson, and Ja’Marr Chase are some names going after Thielen that I would rather have for 2021. The potential for a top 10 WR season seems to be greater for these guys than for Thielen as the number two receiver in a low-volume offense.

Give me Diontae, Lockett, Kupp and DJM instead who are going right behind him

If you are looking for a safe and stable WR to add to an upside roster, Thielen might be your guy. At his current ADP, it’s a pass for me. Now more than ever, Fantasy Football is a game of upside and high-end positional advantage potential. I don’t see it this year with ole reliable Adam Thielen, let’s pump the brakes on the veteran wide receiver.