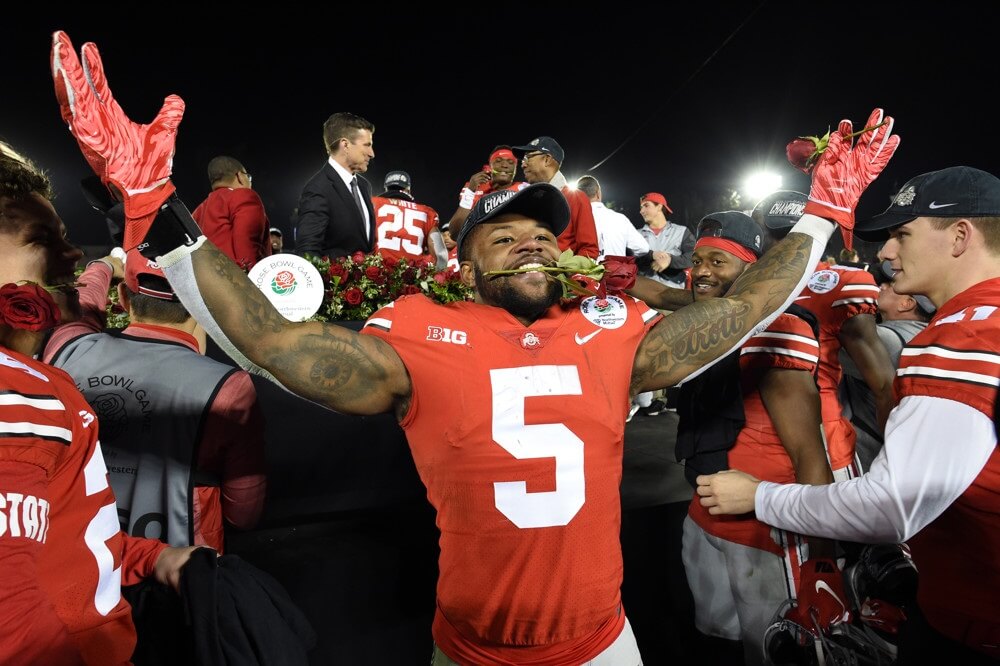 Gary Davenport looks at the performance of Ohio State RB Mike Weber at the recent NFL Combine and what it did for his NFL Draft stock.

Over the past few years, we’ve seen something of a Renaissance in the draft-day value of running backs. With tailbacks like Ezekiel Elliott of the Dallas Cowboys and Saquon Barkley of the New York Giants going from top-five picks to fantasy studs almost overnight, fantasy owners far and wide anxiously await the next “sure thing”—the next no-doubt running back.

The thing is—there really isn’t one in 2019. Alabama’s Josh Jacobs (who has already been previewed here at Fantrax) is the consensus top tailback prospect and a good bet to go in Round 1. But after that the waters muddy pretty quickly. There will be a number of running backs taken on Day 2 who have the potential to become a valuable fantasy asset, just as Alvin Kamara of the New Orleans Saints and Kareem Hunt did after being taken in the third round. But that’s only in the right landing spot—and if they fulfill their own potential.

That crowded group meant that those running backs had a lot to prove at this year’s NFL Scouting Combine. It was a chance to stand out—and give their draft stock a sizable boost by doing so.

And in that regard, there wasn’t a player in Indy who did a better job than Ohio State’s Mike Weber.

Heading into this year’s event, Weber, who topped 1,000 total yards and scored six touchdowns in a carry-share with JK Dobbins in 2018,  told Bill Rabinowitz of the Columbus Dispatch that in his opinion NFL scouts and the draft community were sleeping on his ability a bit.

“I feel I’m being a little slept on right now,”. “That’s something I can’t control. All I can control is to come out here and do my best and show teams why I should be at the top.”

Sure enough, there were plenty of scouting reports out there that indicated Weber was exactly the sort of NFL player that he was at Ohio State—a rotational, complementary running back.

“Mike Weber projects as a rotational back at the NFL level,” Kyle Crabbs of the Draft Network said. “Weber’s controlled patience makes sense in an inside zone. Weber’s contact balance can allow him to garner a share of touches, but his limitations in physical explosiveness make him a modest play in the long run. Weber’s role is likely one of a spot starter, but he’s got the football IQ to maximize his tools and be a worthy piece of a backfield. Should not be considered for full-time RB status, however.”

Then the combine happened.

As R.J. White reported for CBS Sports, Weber starred in just about every workout he participated in. “Weber was the most impressive player of the (running back workouts) to me,” White said. “His 40 was one of the top times of the day at 4.47 seconds, and he constantly looked like one of the best RBs on the field in every drill, showing fluid change-of-direction skills, great hands and quickness in routes.”

Erik Schlitt of Lions Wire was impressed as well. “As a freshman,” Schlitt said,  “Weber looked like he was on his way to being a starting NFL running back but then he suffered an injury and was forced into a timeshare. His stock has taken a hit since but today he reminded people that those freshman traits are still there.”

During that redshirt freshman season, Weber topped 1,000 yards on the ground and averaged over 6.0 yards a carry.

To say that Indy changed some of the perceptions about Weber is an understatement. Before the combine, Chris Trapasso of CBS Sports barely had Weber inside the top-25 at his position. “Weber has a smaller-scat back body,” he said, “and flashes springiness in his step to bounce to the outside where he can exhibit decent speed and a well-timed stiff arm on occasion. He misses holes due to below-average vision.”

After the combine, Walter Football slotted him fourth—ahead of Devin Singletary of Florida Atlantic. “Two NFL running backs coaches told (us) that Weber was one of the backs who impressed them the most at the combine,” the site said. “He ran fast in the 40, ran well in the bag drills, and showed skill as a receiver. Weber could be a steal in the 2019 NFL Draft as he has three-down starting potential with a good skill set of size and speed.”

Now, Mike Weber isn’t getting drafted ahead of Singletary. But his performance in Indianapolis has vaulted him into that Day 2 pack at the position—a player with the skill-set to be a featured back at the NFL level…maybe.

There might not be an area in which Weber’s exceptional, but the 5’9″, 211-pounder (a tad smaller than Kamara) also doesn’t really have any holes in his game. Weber never averaged less than 5.5 yards a carry for a season, and he’s shown the ability to gash good defenses—including a Michigan unit in 2018 that was loaded with NFL talent. Fears about his long speed—if the combine was any indication—were overblown.

I’d love to be able to sit here and say definitively that Mike Weber is going to excel at the NFL level. But I can’t—he’s not Zeke. But Weber isn’t cat food, either. After watching every game Weber played in college (I live in Columbus…it’s an unwritten rule that you have to), I was one of the least-surprised fantasy/NFL scribes in America when Weber impressed in Indianapolis.

Landing spots will be a massively important factor with the fantasy value of this year’s rookie class in the backfield—that’s a side-effect of a closely knit bunch lacking in star power. But just because the 2019 crop doesn’t have a sure-fire star in it doesn’t mean there isn’t talent.

Mike Weber is one of those talents. And taking advantage of under-drafted talent is how hay is made in fantasy football—no matter the format.

I love the smell of value in the morning.