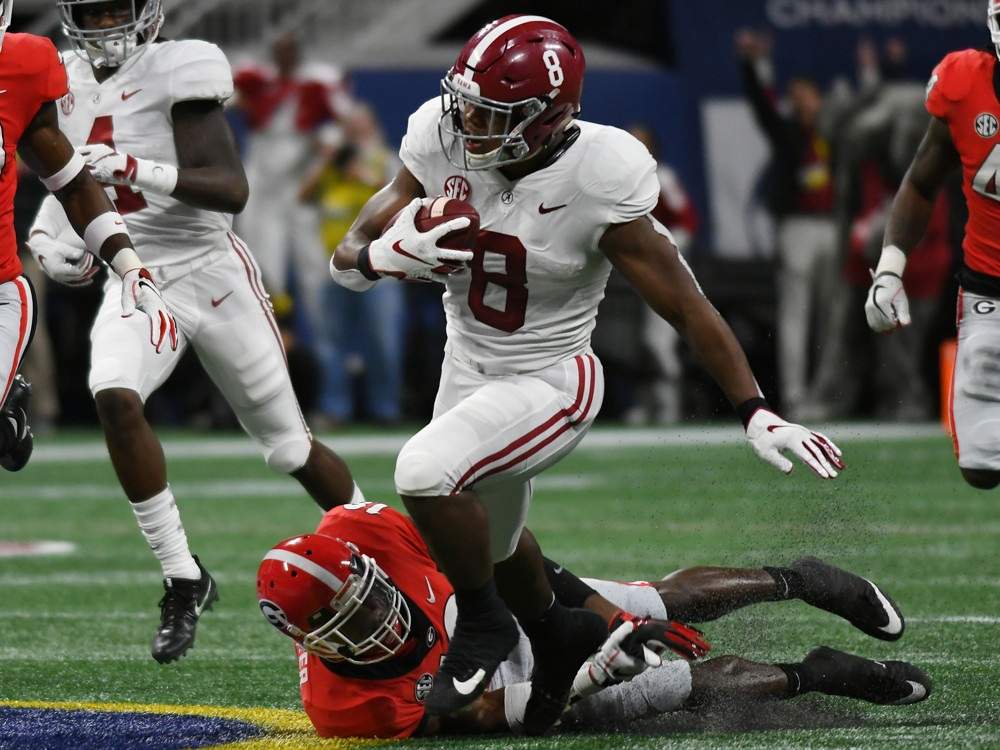 At this time a year ago, there was no question who the top running back prospect in the Class of 2018. It was Saquon Barkley’s world, and we were all just living in it. Barkley was the no-doubt No. 1 pick in rookie drafts. That worked out just fine—Barkley piled up over 2,000 total yards and finished his rookie year with the New York Giants as the highest-scoring running back in fantasy football in PPR scoring systems. This year, things aren’t as clear cut at fantasy’s most valuable position. But as the 2019 NFL Scouting Combine in Indianapolis nears, the growing consensus appears to be that Alabama’s Josh Jacobs is the cream of this year’s running back crop.

Josh Jacobs Tale of the Tape

Dan Brugler of the Athletic is among the high-profile draftniks who rate the 5’10”, 216-pound Jacobs, who amassed 887 total yards and 14 touchdowns for the Crimson Tide in 2018, as the No. 1 tailback in this year’s draft.

“Some backs have a strong lower body and others have an explosive lower body, but Jacobs has both, allowing him to make violent start/stop cuts,” Brugler said. “His lack of touches in college is both a positive (wear and tear not an issue) and a negative (not a proven workhorse). Overall, Jacobs is just scratching the surface of his multi-dimensional skill set, displaying the explosive and versatile traits to be a three-down feature weapon in the NFL with Pro Bowl upside.”

Sam Brief of the MMQB is on board with that assessment as well.

“Jacobs is the most physical runner in this class,” Brief said. “Watching his tape, there are a few instances in each game where Jacobs sheds would-be tacklers with such ease, pounding his way through, around and over them. Jacobs also fits the modern running back mold: He is a ferocious blocker and a smooth pass catcher. And he doesn’t just make plays in the flat—he lines up in the slot at times and is an effective downfield route runner.”

Pop in some film on Jacobs, and it becomes evident pretty quickly what so many pundits see in him. Jacobs has a skill-set that appears tailor-made for the pro game. You name it, he has it. Speed off the edge. Power between the tackles. Agility and the ability to quickly change directions. Receiving chops. And perhaps most impressively, the best blocking skills I’ve seen in a tailback coming out of college in some time.

Simply put, he looks the part of every-down workhorse back at the next level. He can do it all. Hurt opponents on the ground and through the air.

If there’s a knock on Josh Jacobs, it’s that we haven’t seen him function as that every-down workhorse. Last year at Alabama, Jacobs split time with Damien Harris, Najee Harris and Ed Harris.

OK—the last one might not be completely accurate. What is is the fact that Jacobs hasn’t had even 150 touches in a season—much less the 350-plus Barkley rolled up as a rookie.

The last thing dynasty owners want is to blow the top pick in a rookie draft on a player who winds up a complementary back. But as David Paschall of the Chattanooga Times-Free Press reported, ESPN draft guru Mel “The Hair” Kiper thinks that Jacobs’ lack of a heavy workload may actually be a blessing.

“His carries for his career and his rushing yards for his career are basically like one season for a lot of running backs,” longtime NFL draft analyst Mel Kiper said this week, “which means he’s got a lot of tread left on the tires. He hasn’t been beaten up. He waited his turn. When you compare him to (Florida Atlantic’s) Devin Singletary, there was a 463-carry differential for their careers.”

There’s still a long way to go to the NFL Draft, but speculation is growing that Jacobs will be taken in the back half of the first round. Kiper’s hair likes him as a fit with the Baltimore Ravens at No. 22. “The big thing coming out of this draft is to get a guy who can be an immediate help to Lamar Jackson, and that would be Josh Jacobs,” Kiper said. “The way he can run, catch and block, he would be a huge difference-maker in that offense. [Gus] Edwards had a good year, no doubt about it, but this would be a major upgrade for a kid that’s a complete running back.”

Bleacher Report’s Matt Miller, on the other hand, slotted Jacobs two spots later to the Oakland Raiders at No. 24. “The Raiders would be ecstatic to land a featured running back with three-down skills and almost no wear and tear at this spot in the draft,” Miller wrote. “One high-level NFL scout told me his team has Jacobs graded higher than Leonard Fournette. He’s that well-liked as a power runner and receiver out of the backfield.”

In Baltimore, Jacobs would face a bit more competition for touches than in a place like Oakland or Philadelphia (another destination mentioned in some mocks). The trade-off would be playing for one of the league’s most run-heavy teams.

Wherever Jacobs starts his career though, it’s a safe bet that a team spending a Round 1 pick on the youngster will want to get him involved in the offense early and often. If Jacobs demonstrates he’s capable of handling a heavier workload, his carry-share will climb—quickly.

Josh Jacobs isn’t a runaway choice as this year’s top running back in dynasty rookie drafts. Depending on where he lands, it’s not out of the realm of possibility that another first-year tailback could out-point Jacobs in 2019.

But there also isn’t a running back in the Class of 2019 that does as many things at a high level as Jacobs. Whether it rushing, receiving or blocking, Jacobs versatility should serve him well in the NFL.

Jacobs all but certainly won’t be the fantasy force Barkley was as a rookie. He may never be. But imagining Jacobs one day achieving an RB1 ceiling isn’t that difficult—nor is the notion of RB2 production in relatively short order.

As I said, April 25 is still a ways off. So are the dynasty rookie drafts that will follow. But as things stand at the end of February, if I’m sitting on the 1.01 pick….

Josh Jacobs is the guy.

Sleeping with the Staff: Top Pitching Sleepers for 2019