A Dozen Fantasy Football WR Sleepers for the 2019 Season 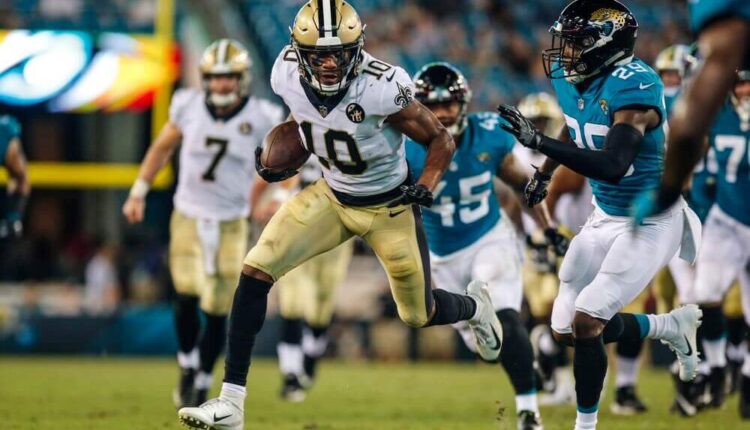 The WR position is deep, but in many leagues you have to start three, plus you can always use one as a flex as well. So knowing and mining the depth can be a significant key to Fantasy success. We help you dig down for the gems others may be overlooking with our rundown of the niftiest WR sleepers for Fantasy Football season.

Robert Foster: The undrafted rookie emerged out of nowhere late last season, with three 90-plus yard games and two TDs from Weeks 12 to 17. He demonstrated big-play ability and Josh Allen is not hesitant to throw downfield. The Bills bolstered their WR corps during the offseason, but Allen already has developed some familiarity with Foster, and their momentum could continue this season.

Anthony Miller: The Bears offense is expected to progress forward significantly in Year Two under Matt Nagy in 2019. If that happens, and Mitch Trubisky stays healthy to display his better form of 2018, Miller could emerge as Chicago’s WR1. He caught seven TD passes as a rookie and Allen Robinson appears to be a ghost of what he was.

Michael Gallup: Even though the Cowboys acquired Randall Cobb during the offseason, he is a much lesser player than he used to be, and Gallup is expected to step forward as Dallas’ WR2 across from Amari Cooper. Gallup started to come on late last season and in the playoffs, catching a TD pass in the win over Seattle and totaling 119 yards on six catches against the Rams. Stepping up on the bigger stage makes Gallup very appealing for the 2019 Fantasy Football season.

Geronimo Allison: I have already been pontificating about him throughout the offseason. Allison has experience working with Aaron Rodgers, and the Packers made no offseason moves to block him from being the second target across from Davante Adams. Allison played well for four games before his 2018 season was ruined by injuries. He is a great later round pick, and he had a lot of preseason buzz last year. I would look for him to deliver what some analysts like myself expected last season.

D.J. Chark: Someone has to become a prime target for Nick Foles this preseason. Chark could be that guy, or maybe even the second behind Dede Westbrook, but the potential is still there for him to break through in his second pro season. The Jaguars picked him in the second round last year and should give him a chance to shine considering the draft capital they invested in him. Chark has an improved QB situation and the talents to put an injury-marred 2018 debut behind him.

Braxton Berrios: This is a super duper deep sleeper type. The 2018 sixth round pick created some internal positive talk last year before he missed the season on IR. But he is ready for the 2019 season and has already made some impressive grabs in early practices. Described as a Wes Welker clone, Berrios could begin to emerge as New England’s next notable PPPR contributor.

Dontrelle Inman: Inman is the elder statesman of my WR sleepers. The Patriots are WR needy, and if N’Keal Harry proves to be overwhelmed as a rookie, the former Colt and Charger could step in and do an adequate job. Inman finished his Colts tenure with 123 receiving yards and two TDs in his final two games last year. He may have to play a more significant role for the Patriots than he did for the Colts, and opportunity may be there for him as a needed big target.

Tre’Quan Smith: He was very boom or bust as a rookie, but the Saints did nothing during the offseason to suggest they won’t give him an opportunity to be the WR2 in their passing game this season. Ted Ginn Jr. is now 34 years old, and it’s time to replace him as the prime downfield target in the New Orleans passing game. We have already seen Smith make big plays, now he will get chances to become a more complete all-around WR. There is no one standing in his way to fully seize the WR2 job with the Saints.

Tyrell Williams: While everyone is talking about the arrival of Antonio Brown in Oakland, the former Charger is ready to break out. One of the most sought after WR targets of the offseason because of his combination of size and speed, Williams wanted to sign with a team that would commit to making him a more important part of their offense. The Raiders showed they wanted him with a four-year deal. He will obviously benefit from all the defensive attention Brown draws and is ticketed to become the clear No. 2 WR in an improving offense. He should also get frequent looks near the goal line.

Diontae Johnson: The exciting rookie is immediately expected to compete for playing time as a slot WR. There could be opportunity in Pittsburgh for Johnson, as James Washington looked not ready for prime time in his first season and Donte Moncrief does not have big-play ability. If Johnson can quell concerns about his route running, he could have a chance to make an instant impact with a Hall of Fame QB getting him the ball.

David Moore: Tyler Lockett is coming off his best season yet, and D.K. Metcalf is already generating a lot of local hype in Seattle. But Moore flashed some promise last year as a downfield and TD threat, and the team has a lot of internal enthusiasm regrading Moore. Late last season, Pete Carroll said to me “we have not seen the best of him yet.” Don’t count out Moore to become a primary WR for Russell Wilson as the post Doug Baldwin era begins.

Trey Quinn: He was Mr. Irrelevant of the 2018 NFL Draft, but a WR starved Redskins team will give him a serious chance to contribute this year. Quinn is expected to get the chance to replace Jamison Crowder in the slot, and he could become a very reliable target for the Washington passers. He is no small fry, and could have some TD potential too.

Are you buying into Scott’s WR sleepers for 2019? For more great rankings, sleepers, and analysis check out the 2019 Fantrax Fantasy Football Draft Kit.