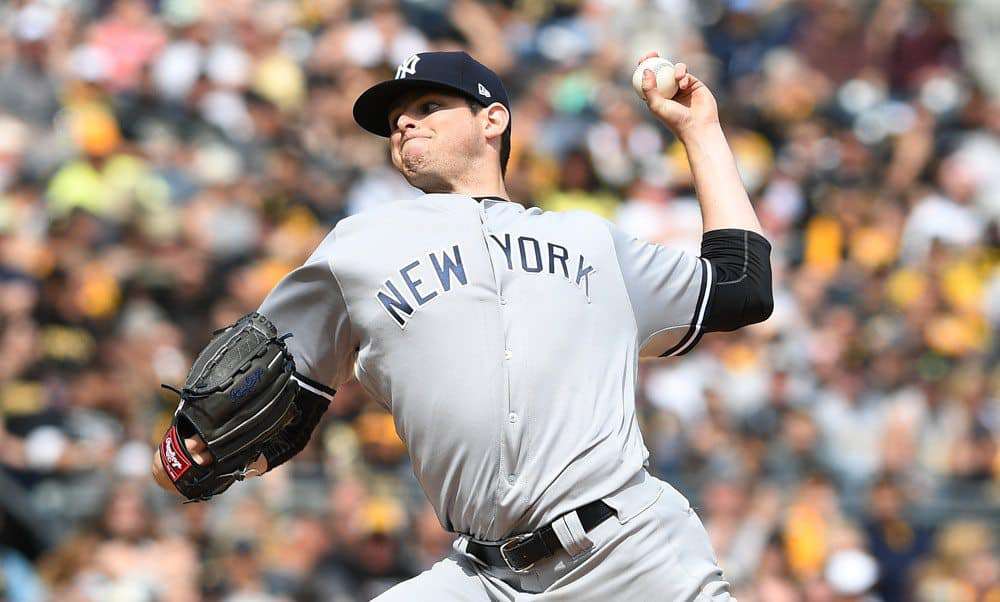 In last week’s Fantrax top-10, we listed 10 affordable players that could give your team a speed boost. This week we switch to some affordable pitchers that could make a difference for your fantasy squad in the second half of the season.

Pitching is a whole different animal in the fantasy world. If one hitter has an 0-for-5 night, no big deal. It won’t hurt your team too much. However, if one of your starters gets shelled to the tune of nine earned runs over two innings, that’s going to be tough to come back from in weekly matchups. That’s why it’s so important to find good pitching wherever you can. Below are 10 names that you can either add from your waiver wire or acquire via trade for a reasonable price.

If you don’t have any open disabled list spots, then you can skip this one. If you do have room to stash Anderson, then I encourage you to read on. Anderson is scheduled to be out until early to mid-August, but don’t forget that he was cruising before the injury. In 16 starts, he had a 2.89 ERA, 1.11 WHIP, and 8.5 K/9. A big reason for his success this season is that he’s cut his HR/9 rate by more than half from 1.7 to 0.8.

A lot of people cut bait on him when he went on the disabled list. With so many guys getting injured this year, sometimes you have to cut a guy loose so you’re not carrying dead weight. Anderson is currently owned in roughly 50 percent of Yahoo leagues. If you have a DL spot open, it wouldn’t hurt to stash him. He could be a strong contributor down the stretch and into the fantasy playoffs.

At the surface, Newcomb has a lot of qualities you look for in a top-of-the-rotation arm. He’s a big left-hander with a plus heater and plus curveball. His downfall has always been his spotty control. His career minor league BB/9 was a paltry 4.8. That’s going to bite you at the major league level with advanced hitters. Fortunately, Newcomb has always had an elite strikeout rate (career 10.7 K/9 rate in minors) at every level.

So far in his first five major league starts, both his walk rate and strikeout rate have dropped to 3.3 and 7.5, respectively. I’m not worried about his strikeout rate, but it would be huge for his value if he can keep that BB/9 below 4.0. Newcomb reminds me a lot of Carlos Rodon of the White Sox, and his value should be similar going forward. Potential high-upside arm.

Remember him? Going into the season, Velasquez was a popular sleeper pick in fantasy drafts after posting a 10.44 K/9 mark in 131 innings last season. However, this year hasn’t quite gone as planned for the young right-hander. He has still been striking out over a batter per inning, but his ERA and WHIP have ballooned to 5.58 and 1.46, respectively.

Velasquez has been on the shelf since late May with a flexor strain in his right elbow. However, his return to Philadelphia’s rotation is drawing near. That strikeout rate cannot be looked past. It also helps that the NL East, outside of Washington, is a weak hitting division. There’s a lot of talent here, so give him a look. He could pay big dividends down the stretch.

It wasn’t too long ago that Cobb was one of the best pitchers in the American League. He registered a crisp 2.82 ERA and 8.2 K/9 over 49 starts in 2013 and 2014. Unfortunately, injuries have derailed his career the past two years. Cobb missed the entire 2015 season due to Tommy John surgery and was able to make it back for only five starts at the end of the 2016 season.

After starting a little rocky, Cobb has turned it on over the last month with a 2.91 ERA and 1.03 WHIP over his last 34 innings. His strikeouts are down, but Cobb can be a strong asset in the ratios the rest of the way.

Meet the Alex Cobb of the National League. Whenever McCarthy is healthy, he usually pitches well. However, it seems like he’s on the DL more often than not. He made 13 starts this season before a knee injury landed him on the 10-day disabled list. After making it through a four-inning simulated game Monday, McCarthy is scheduled to return to the Dodgers’ rotation this afternoon against Kansas City.

Just like Cobb above, McCarthy won’t be a big strikeout asset for fantasy owners. What he can help with is keeping your team’s ratios low while providing ample wins.

With all of the other great pitchers on the Nationals’ staff, Ross often gets overlooked. When you look at his overall stats, they don’t inspire confidence. His 4.86 ERA and 1.46 WHIP are the definitions of mediocre, but it’s what he’s done over the last month that should get fantasy owners excited. Over the past month, Ross has a 2.95 ERA, 1.31 WHIP, and an 8.2 K/9 rate. Those are pretty similar to what he put up in his 105 innings last season.

Ross should be a fixture in the Washington rotation for the rest of the season and should be on fantasy rosters, too. What he’s done over the last month is a good measuring stick for his rest of season value. The one area of concern is his 1.92 HR/9 rate. If that continues, he’s going to get himself in trouble, but that rate has never been over 1.0 since he got drafted. Expect that rate to fall as the season progresses.

This is the second time Kahnle has made an appearance on my weekly top-10 list, so you know he’s got to be doing something right. I was originally going to make this list entirely about starters, but Kahnle’s current production and rest-of-season potential deserve more recognition. For his last inclusion in my top-10, click here. For a more in-depth profile on him, check out Greg Jewett’s article on him.

Let me first point out his ridiculous 15.3 K/9 rate. That is good for fourth in the majors behind only Dellin Betances, Craig Kimbrel, and Corey Knebel. That strikeout rate, plus his low 2.45 ERA and 0.94 WHIP, should have him on more rosters to begin with. If, more like when, the White Sox trade David Robertson, Kahnle should step into the closer’s role and flourish down the stretch. He could have just as big of an impact as Knebel had when he moved into the closer’s role earlier this season.

Out of all the pitchers on this list, Rodriguez is the one with the highest ceiling. He’s a big left-hander with a mid-90s fastball and a plus hook. What’s not to like? I’ll tell you what’s not to like. His random injuries. Rodriguez was having a good start to the season before a right knee subluxation forced him to the disabled list in early June. Before the injury, Rodriguez posted a 3.54 ERA, 1.15 WHIP and a 9.6 K/9 in 65 innings.

The talent has never been questioned, but this has been the year that we’ve seen some real advances from Rodriguez. Having two fellow lefties like Chris Sale and David Price in the rotation seems to be helping him in a big way. Sale is known for working quickly and attacking hitters, and that’s what Rodriguez has been doing this season. He should be back after the All-Star break, and a strong second half seems likely for Rodriguez.

Montgomery is a player I’ve been “pitching” to fantasy owners for a couple months now. He may not have been a shiny prospect like some of the other recent Yankee’s rookies, but he’s been consistently good all season. Entering the All-Star break, he sports a 3.65 ERA, 1.23 WHIP, and 8.6 K/9.

He’s steadily been getting better as the season progresses. After having 22 walks in his first 56 1/3 innings, Montgomery has issued only six free passes in his last 35 innings. The strikeout rate has been consistently rising as well. Expect him to make further strides as the season goes on.

There’s a slim chance Nola is available on your waiver wire. If he is, go add him immediately. However, his inclusion on this list is due to his tempered trade value. Before he started having arm issues last season, Nola was one of the 20 best starters in baseball. It’s a shame those arm issues had to happen because those last few starts he made demolished all the great work he did to start the season.

After a show start to the season, Nola is reverting back to his pre-injury 2016 form. Over the last month, he has a stellar 3.06 ERA, 1.14 WHIP, and 10.3 K/9. He’s looking better with each passing start. Pinpoint control is one thing he’s always had going for him. Nola isn’t a guy that will get himself in trouble by issuing too many free passes. Like I mentioned to start, if he’s on your waiver wire, add him now. If not, try to make a trade for him before his value continues to rise.

Thank you for reading another edition of the Fantrax Weekly Top-10. Check back next Saturday for another list. Got a question about a player not covered here? Feel free to comment below or ask me on Twitter @EricCross04.