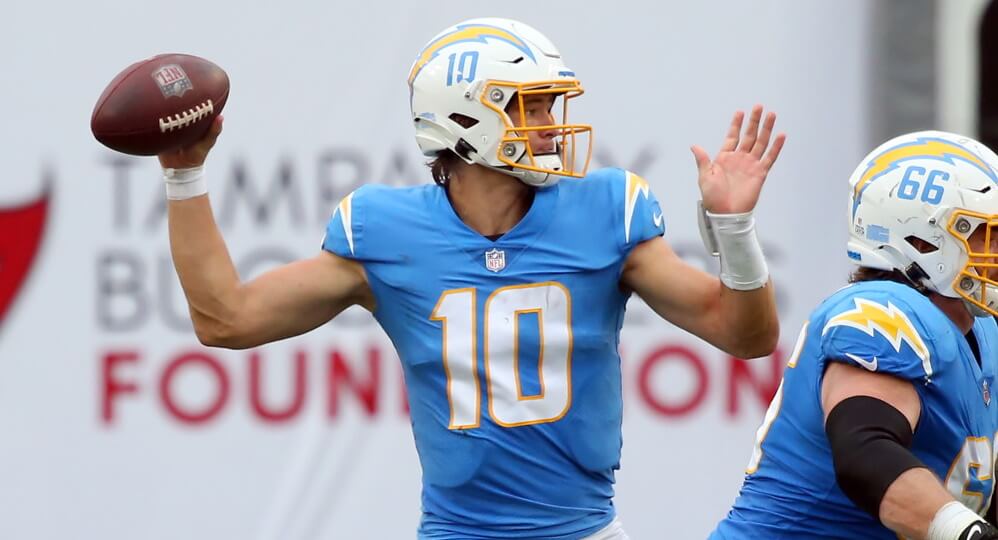 Welcome back for another week of DFS picks, and Week 8 has to be my best picks yet. Week 7 was a nightmare with multiple fantasy stars on a bye. This week I was able to fit Ezekiel Elliott, Stefon Diggs, Justin Herbert and Damien Harris on my FanDuel lineup.

There are tons of players on a bargain this week. Below I will have some of my top value picks for each position that will help you set up your lineup.

In terms of stats against quarterbacks, the Patriots are the seventh-best defense. However, they have played the Jets twice already. In Week 6 Dak Prescott went for 445 yards and three touchdowns. Aside from Tom Brady that was the second fantasy stud of a quarterback this defense has gone against. The Chargers will be at home and coming off a bye week. This will be a high-scoring game and I see Herbert having another game as he did against the Browns.

Elliott is back to being a top running back after some inconsistent seasons. This week the Cowboys have the Vikings who are giving up just over 19 fantasy points to running backs this season. Elliot has a bargain of a price this week in both FanDuel and DraftKings. So he is a must-start this week and what should be a high-scoring game.

James Robinson is a great RB2 for DFS this week as he goes against the Seahawks. We’ve all seen how bad the Seahawks are against the run. They are giving up the third-most fantasy points to running backs. Ever since Week 3 came around, Robinson woke up. His rushing attempts went up and so did his fantasy points. Great running back and a great matchup, don’t overthink it.

Harris is another running back I’ve grown to love over the last few weeks. He is getting his attempts and is making the most of it on the ground. In his last two games, he has 207 yards and three touchdowns. Harris is looking like a Nick Chubb type of running back this season. It may not look right, but the Chargers are the second-worst team against the run this season. They are giving up an average of 26.5 fantasy points to running backs. Harris has been hot and you need to roll with the hot hand.

Diggs almost had his breakout game of the year before their bye week. But, this will be the week he goes for over 25 fantasy points. His salary has gone down week by week since he has been underperforming. But, just look at that as a steal for you. The Bills have the Dolphins this week who are giving up the second-most fantasy points to wide receivers. Diggs is a ticking time bomb to have a huge game and it all lines up to be this week.

Diontae Johnson has been Ben Roethlisberger’s favorite target all season. And with Juju Smith-Schuster out, he is going to keep having huge games. Johnson has a way too low of a salary this week when he is easily a WR1. His lowest score has been 14.6 this season and that game in Week 1. He is averaging just over eight targets a game over six weeks. And he has the Browns this week. Division games are always high-scoring and Johnson will be the main target all game.

Just like I said above, the Patriots have not gone against high-powered offenses this year until they saw Tampa Bay and Dallas. Everyone is looking at Mike Williams to make the huge plays, so Keenan Allen’s salary has dropped in DFS. But like Diggs, Allen is due for a huge game and I believe this will be the game. This will be a high-scoring game and Allen will come down with at least one touchdown.

I’m surprised Robert Tonyan is so low in DraftKings. Both Davante Adams and Allen Lazard are out this week with COVID-19. Marquez Valdes-Scantling is also up in the air if he will play, having been on the IR with a hamstring injury. That only leaves Tonyan and Randall Cobb as Aaron Rodgers’ top targets. We’ve seen Tonyan go for big games in the past and this will be another one against the Cardinals.

The Buffalo Bills have the Miami Dolphins this week. And if you want a bargain on a team, why not have the top fantasy defense in the league right now? The Bills have been one of the most consistent defenses this year and the Dolphins have been up in the air on offense this season. The Bills already blew the Dolphins out 35-0 in Week 2. I don’t see another blowout, but the Bills will have their number this week.