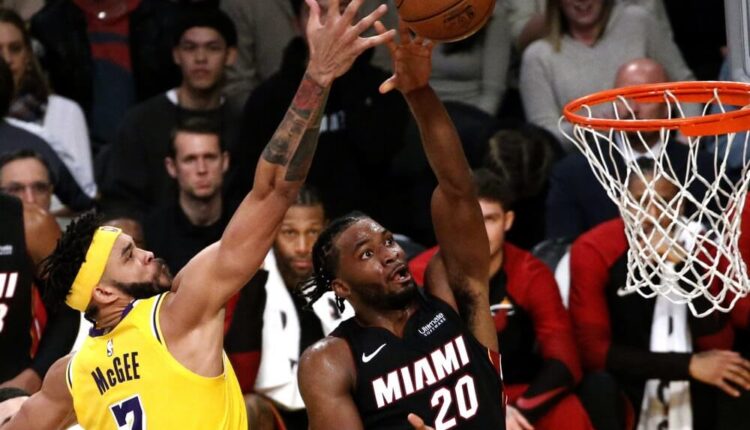 Week 11 saw quite a few players fall to injuries. LeBron James and Rajon Rondo are out for a while, John Wall may be heading for surgery and Chris Paul’s injury may keep him out for longer than initially expected. This week’s fantasy basketball waiver wire has a few players that will play key roles in lieu of the aforementioned stars. This week’s waiver wire options are better adds than we’ve had in weeks and five of them are as close to must-adds as we’ve had all season. Once again, I’ve ranked the waiver wire options in terms of rest of season value. As usual, these players are available in at least 60% of leagues.

Winslow has been tearing it up since he was named the Heat’s starting point guard. In 3 games, Winslow has averaged over 22 points, 6 rebounds, 5 assists, and 2 steals while shooting at nearly 60% from the floor. It’s a small sample size, but the Heat have won two of those games by 24 points and took a 2-point loss to the Raptors. Winslow is by far their best option at PG while Goran Dragic is out and should continue to get the minutes. Winslow is a must grab off the waiver wire looking ahead to week 12.

The Wizards announced John Wall is set to see a specialist for bone spurs that have been bothering him all season long and possibly even beyond. Enter Tomas Satoransky, who has already seen an increase in playing time since the Austin Rivers trade. Sato hasn’t wowed in his time in the NBA, but his expected infusion of minutes should be appealing to fantasy basketball owners. Satoransky has been a relatively good shooter so far, hovering at around 49% on the year. He can also chip in with rebounds, assists, and steals. With Wall potentially out for the year, Sato gets a huge boost to his value for the rest of the season. If he’s available on the waiver wire, pick him up. He’s a must-own player as the Wizards’ situation unfolds.

Kurucs has surged into the Nets’ rotation as of late and helped them become one of the hottest teams in the league since the start of December. Kurucs is shooting over 50% from the floor, averaging just over 10 points, 4.5 rebounds, nearly a steal, an assist and a three a game. More importantly he was a major contributor to the Nets’ 7-game win streak. Kurucs has a shot at sticking in the Nets’ lineup in the future. For those who have already grabbed Kurucs, last night’s dud shouldn’t be the breaking point. He’s still a hold and a solid add off waiver wires in leagues he’s available.

The Lakers have suffered key injuries to two of their starters. LeBron James isn’t expected to play for the majority of Week 12. Rondo, on the other hand, is expected to undergo surgery and miss a month. In the meantime, the former Summer League MVP will finally get a shot to prove he deserves to stick in the Lakers lineup. I talked Hart up as a sleeper entering the 2018-19 season, but he hasn’t played up to that claim so far. Hart is a must-own player at least until LeBron James returns. He can contribute in multiple categories and will be leaned on much more with the King’s absence. Hart is still available in over 50% of leagues, make sure he isn’t out on the waiver wire.

It’s hard to understand why Vonleh is still available in over 40% of leagues as of week 12. He’s putting up top-75 value through the year and is a stable part of an otherwise fluctuating rotation. Vonleh is chipping in almost every category and is one of the best glue guys for your fantasy basketball team. Aside from a lack of points, there are few fantasy downsides to Vonleh’s production. If he’s still available on your waiver wire, you can count on him for the rest of the season.

Bridges’ numbers aren’t eye-popping, but his contributions have been sneaky, to say the least. Over the past two weeks, Bridges has fringed as a top 50 fantasy asset. He’s earning coach Kokoshkov’s trust despite a wing position that is increasingly crowded since the addition of Kelly Oubre. Fantasy basketball owners need not fret, as Bridges is turning into one of the best 3-and-D wings in the league in just his rookie season. The fantasy appeal comes from his 4.0 rebound, 2.0 assists, 1.5 steals, 0.7 blocks, 1.5 three line over the past month. Again, not eye-popping, but sneakily valuable. Especially for owners punting points and shooting percentages. It’s going to be increasingly difficult to leave him on the waiver wire as the season continues.

Beasley is a better IRL player than fantasy basketball asset. The Nuggets are another team hit by the injury bug. Denver is counting on Beasley as a source for points. Luckily for them, their depth goes all the way to the 10th and 11th man. If you’re looking for 3-point production, Beasley is a fine choice to target off the waiver wire. He’s been nailing two of them on average over his past 4 games. He’s also averaging 1.8 steals over that span. Though the number is inflated by a 5-steal outing against the Clippers. Beasley is ownable for the time being. But he’ll be one of the first Nuggets to lose minutes when the team gets healthier.

(From last week’s waiver wire) Temple is enjoying a career year in his age-32 season in Memphis. While he’s not the most exciting name (he might actually be close to the least exciting) in fantasy basketball, there’s no denying his production of late. He’s inching closer to top-50 value over the past week. It’s his defensive contributions that are at the root of his rise. His production is reminiscent of Danny Green.

Since Kyle Lowry’s absence from the lineup, VanVleet has filled the point guard role to the tune of 32.6 minutes per game. FVV has never been the best in terms of shooting percentage, but his 14+ points, 2.5 threes and 4 assists have been valuable. VanVleet has vaulted into a top 100 player over the past month and is ownable while Lowry remains on the sidelines.

Payton was spotted taking shots pregame recently and is “inching closer to a return”. Though a small sample size, Payton is looking like a nice fit alongside Jrue Holiday. The Pelicans have enough scorers on the roster, but Payton is well known for posting big rebound and assist numbers. Payton is also averaging 1.3 steals for his career. He has nightly triple-double potential, and New Orleans is optimistic about a week 12 return. Now is the time to pick him up and get ahead of the curve.