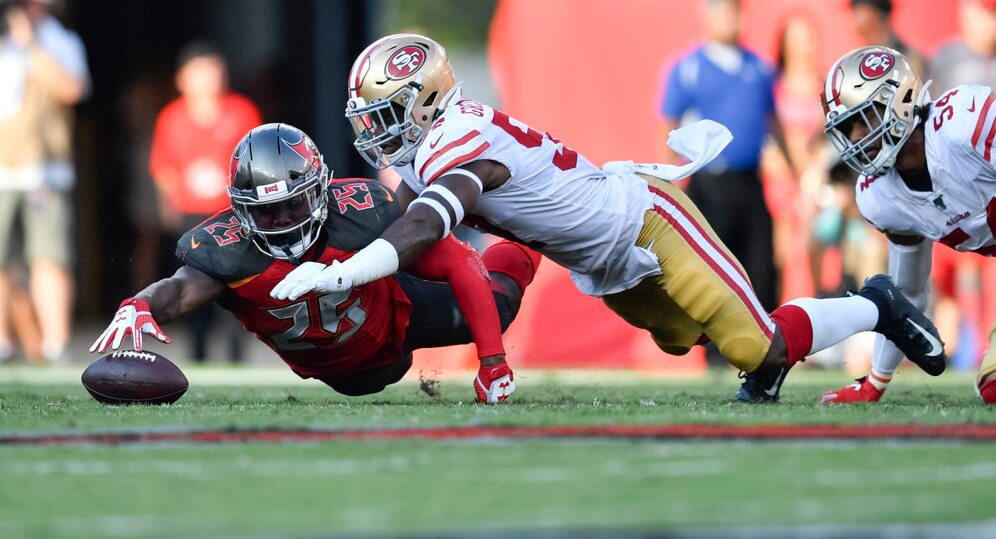 Six teams on bye? Seriously? Have no fear, Gary Davenport is here with his favorite Week 10 IDP sleepers to help you plug the holes and keep your team afloat as we head toward fantasy playoff time.

Week 10 brings with it a calamitous event in IDP leagues. No fewer than six teams are on a bye, leaving fantasy owners with a shallower pool of talent than usual.

However, no matter how bad things are going for your fantasy team, your 2019 season isn’t going as bad as the New York Jets. And the inside linebackers are the poster children for the dumpster fire that is Gang Green.

The team’s big-money free-agent addition at the position (C.J. Mosley) made it through all of two quarters before suffering an injury he’s yet to recover from. The other veteran linebacker who was supposed to join in the middle of the Jets defense didn’t even make it that far—Avery Williamson tore his ACL in the preseason.

Veteran reserve Neville Hewitt? Out the past several weeks with a neck injury. Rookie Blake Cashman had one big game and then tore his ACL in practice. It’s gotten so bad that the team was forced to kick outside linebacker Brandon Copeland inside last week against the Miami Dolphins.

Copeland knows it’s been a miserable season in New York. But as he told Mark Cannizzaro of the New York Daily News, once he steps between the lines, he can’t worry about the chaos that has engulfed the team.

“Speaking for myself, it’s easy for me to phase that negative stuff out once we get between the white lines, because I understand that this is not promised,’’ Copeland said. “I’ve been on practice squads, I’ve been cut, I had [pectoral] surgery, I sat out for a season, I got suspended when I didn’t think I should have gotten suspended. So, seeing that nameplate above my locker, I understand that this is not promised.”

Copeland played like a pro against the Dolphins, piling up nine total tackles (eight solo) and adding a sack while playing every defensive snap. The Jets have a top-five IDP matchup coming up with their roommates at Met Life Stadium, and with an ownership percentage of just five percent in IDP leagues at Fantrax, Copeland more than meets the ownership percentage threshold of 20 percent or less required for “sleeper” status in this article.

Here are some more Week 10 IDP sleepers that can help you survive the dark days of the Bye-pocalypse.

After a tumultuous tenure in New England, Bennett was shipped off to Dallas at the trade deadline for a conditional draft pick. As Patrik Walker reported for CBS Sports, after notching three total tackles and a sack in his Cowboys debut last Monday night, Bennett earned a seal of approval from the man who signs his checks.

“I thought he was outstanding. I thought he really was impactful in there,” team owner Jerry Jones said following the game. “I thought that the team in general were feeding off of what he was bringing, and of course very likely he was feeding off what [DeMarcus Lawrence] was doing out there and what [Robert Quinn] was doing. He really is a great addition for us, and don’t really use that word but he is a great addition for us.”

Bennett played quite a bit on the interior of the defensive line, and by game’s end he was on the field for over 60 percent of Dallas’ defensive snaps. That workload and the veteran’s long track record of production gets the 33-year-old on the matchup radar ahead of Sunday night’s game against the Vikings.

Getting tired of seeing Sheard listed here yet? Then go pick him up.

Sheard actually wasn’t on the sleeper radar last week against a Steelers team that ranks dead last in the NFL in sacks allowed this year. However, as Walton Spurlin wrote for Fantasy Pros, this week’s matchup with the Miami Dolphins is a whole different kettle of fish.

“Since returning from a knee issue that held him out of games early in the season,” Spurlin said, “Sheard has managed to put up 15 total tackles along with 1.5 sacks in five games played. Coming off of a down performance against the Steelers Sheard has the perfect matchup for a bounce-back performance. The Dolphins’ offense has given up 32 sacks this season with 19.5 having been put up by defensive linemen. Miami has also allowed the most QB hits this season and that bodes very well for Sheard and company along the Colts’ defensive front.”

If that isn’t enough to sell you, consider this—among NFL teams, only the New York Jets and Tennessee Titans have allowed more fantasy points to defensive linemen in 2019 than the Dolphins.

Brandon Copeland isn’t the only reserve who has been pressed into full-time duty for the injury-ravaged Jets—Burgess has gone from New York’s practice squad to playing every defensive snap last week against the Dolphins. As Matt Stypulkoski reported for NJ.com, that went about as well as everything else for the team in 2019.

“Burgess hasn’t exactly been put in a spot to succeed – he’s been pressed into action because of the Jets’ extensive injuries at inside linebacker,” he said. “In his two games since being called up from the practice squad, he’s made it clear that he still has development to do. Burgess looked particularly bad on Sunday when Dolphins tight end Mike Gesicki consistently shook free. Gesicki finished with six catches for 95 yards – and most of those came with Burgess in coverage.”

The thing is, IDP owners don’t care if Burgess sucks—or at least they shouldn’t. The much more interesting facts are that the Giants rank second in fantasy points per game allowed to linebackers and that whole part about Burgess playing every defensive snap.

The 49ers are the last undefeated team in the NFL, but last week’s win in Arizona came at a high cost—the team lost weak-side linebacker Kwon Alexander to a season-ending torn pectoral muscle. Per Eric Branch of the San Francisco Chronicle, rookie Dre Greenlaw is ready to step into the void—and the youngster knows that the Seattle Seahawks will go at him Monday night.

“I’m expecting them to come at me, of course,” Greenlaw said. “Me being a rookie and (playing) kind of a new position. I’m sure my teammates will have my back. The guys I got up front, they’re as dominant as anybody in the game. So, there’s not really any pressure on me. All I’ve got to do is go out there and do my job — do my assignment.”

Greenlaw logged three tackles and a sack in 27 snaps after Alexander got hurt against the Cardinals, playing in subpackages as well. There should be ample opportunities to produce in Week 10 against a Seahawks team that ranks fourth in the NFL in rushing attempts.

Harris took the road less traveled to the NFL—from California University of Pennsylvania (which is apparently a thing) to the Hamilton Tiger-Cats of the CFL to the New Orleans Saints and then finally the Raiders. As the 29-year-old told Rob Rose of the York Dispatch, the journey taught him to never take anything for granted.

“I don’t need anybody to tell me what I can and can’t do because I have full confidence in myself and my ability,” Harris said. “Nobody should ever put limitations on another person. I have heard all my career, ‘He is good at this, but he is not great at this, and he is just a special teams player if he gets to the NFL.’ Some people are bothered by it, I am always motivated by it.”

In his fourth NFL season, Harris has become a full-time starter in Oakland, tallying 41 tackles and a pick-six that sealed Oakland’s Week 4 win over the Indianapolis Colts. In last week’s win against the Detroit Lions, Harris piled up a career-high 11 total tackles, and over the last two weeks Harris is a top-12 fantasy defensive back.

Tartt and fellow 49ers safety Jimmie Ward have been friends ever since the two were high school teammates in Alabama. As veteran cornerback Richard Sherman told C.J. Peterson of the San Francisco Examiner, the dynamic that creates in San Francisco’s defense is unique.

“Have you ever seen the movie ‘Life’ with Martin Lawrence?’” Sherman said. “Those two are like that in the movie. They’ve known each other for way too long and they’re hilarious to hear. They’re like an old married couple back there, man. You’ll go into the huddle sometimes and they’ll be arguing about something. It’s like ‘What? Are you guys even in the same game as me right now? What are y’all talking about?’ ‘Well ‘Quaski did this.’ and ‘Jimmie did that.’ It’s fun, man, and I enjoy it.”

Tartt hasn’t been lighting up the stat sheet in 2019—he has just 31 tackles for the season and hasn’t tallied more than five solos in a game this year. But Tartt’s best tackle numbers of the season came last week against the Cardinals, so it’s possible that Alexander’s injury could open up a few more tackle opps for the 27-year-old beginning with a top-10 fantasy matchup for defensive backs against the rival Seahawks Monday night.