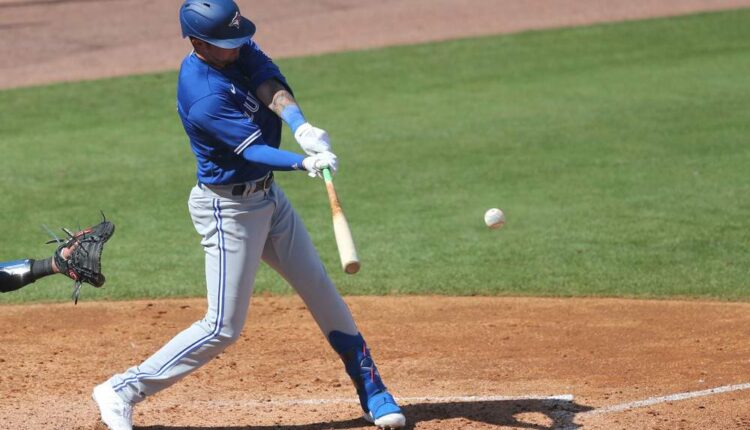 Welcome to our 2022 team top prospect rankings series. Over the next month or so, Eric Cross and Chris Clegg will go through all 30 Major League organizations, continuing today with their Toronto Blue Jays Top Prospects for dynasty leagues. In each installment of this series, you’ll find the top-20 rankings from both Eric Cross (AVG) and Chris Clegg (OBP) along with one prospect each that they’re targeting heavily in dynasty leagues right now. Hopefully, these rankings will help you in your dynasty leagues, and maybe give you some new trade targets to consider.

When it comes to prospects, this Toronto Blue Jays organization is quite as loaded as it was a few years ago. But it’s not exactly an easy task to graduate players like Vladimir Guerrero Jr, Bo Bichette, Lourdes Gurriel, Cavan Biggio, and others, and still have a top-notch farm system. This system is down from a few years ago but is led by one of the best catching prospects in the game and even more infield talent.

Most of the time, a major injury isn’t a positive for fantasy purposes. However, it might be here with Gunnar Hoglund. Or, at least a small silver lining. If Hoglund didn’t need Tommy John surgery, he might’ve been a top-10 pick in the 2021 draft and likely would be going 5-10 spots higher on average in FYPDs this offseason. That has opened up potentially the only buy-low opportunity we’ll get with Hoglund. Because once he returns to the mound later in 2o22, Hoglund has the potential to really fly up prospect rankings.

Hoglund works with a three-pitch mix, headlined by his low to mid-90’s fastball that ticked up in velocity in 2021 before getting injured, touching 97-98 at times with life. It’s considered a plus offering and Hoglund will pair a plus slider and an average or better changeup as well. The arsenal is impressive in itself, but Hoglund also exhibited above-average or better command and control of that arsenal as well throughout his collegiate career at Mississippi. In 154 career collegiate innings, Hoglund posted a minuscule 5.5% walk rate. There’s always an element of risk with TJS, but pitchers come back better than they used to and Hoglund is a talented arm worth investing in for dynasty leagues while his trade value is slightly suppressed.

The Blue Jays farm system has definitely lost some star power with the recent graduates and trades. It is exactly how you want to build a farm and see your team excel at the big league level. While the Blue Jays have several talented prospects, the talent pool is limited. But, there are still some decent targets within the farm system.

In a dynasty league, I think an excellent under-the-radar FYPD target is Ricky Tiedemann. Tiedemann fits the perfect mold of a pitcher I want to target in an FYPD draft. Often time the top pitchers end up being busts, so taking a shot on late-round upside arms is the way to go.

Tiedemann was the Blue Jays’ third-round pick in 2021. The 6’4 lefty has been highly impressive in Minor League camp according to sources. Tiedemann’s fastball is sitting around 96 and touching 98 mph after topping at 94 last season as a prep pitcher. Tiedemann also features a slider and changeup that both shows promise. Command will be the big question mark, but if it develops, I like Tiedemann’s chances of sticking as a starting pitcher.