Three Fantasy Busts Who Will Ruin Your Fantasy Football Season 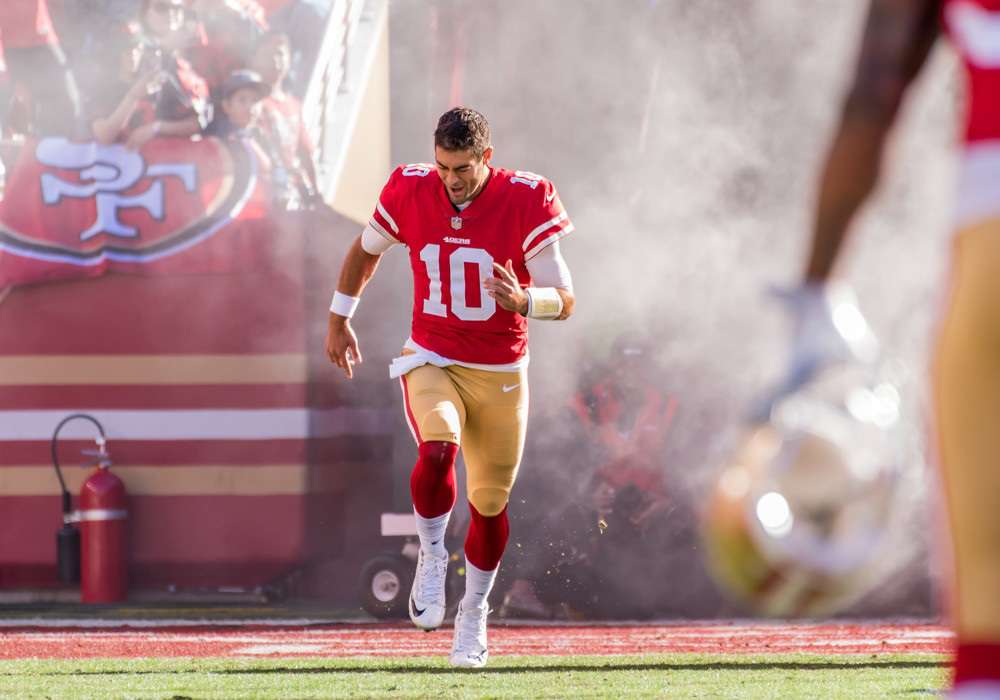 Having a successful fantasy football draft is all about maximizing value with every pick. You don’t necessarily have to make the safe choice every single time, as a player who is deemed risky can have upside which outweighs many of the risks attached. But drafting a couple fantasy busts, particularly early on, can ruin your chances of success:

If a player you select in the latter stages of a draft as a backup and he does not pan out, it will not necessarily ruin your fantasy season. Therefore, for the purposes of this exercise, I will highlight three potential fantasy busts going way too early in drafts who are most likely to ruin your fantasy football season based on their present draft stock and downside.

Three Potential Fantasy Busts Who Could Ruin Your Season

Jimmy Garoppolo started the final five games of the year in 2017 and led the previously 1-10 49ers to a 5-0 record. That turnaround combined with Garoppolo’s average of 308.4 passing yards per game during that stretch has sent the hype train for Jimmy GQ into overdrive.

Aside from the small sample size concerns, there are a couple of other factors that could turn Garoppolo into one of the bigger fantasy busts this season. First, as great as he was, he only threw six touchdowns in those five starts. That’s not exactly elite production. That pace of 1.2 touchdowns per game was bested by 24 quarterbacks last season.

Garoppolo also has a rough schedule to start the season. September road tilts against the Vikings, Chiefs, and Chargers will present a tough test. October doesn’t look much better, with two matchups against Arizona sandwiched around a visit to Green Bay and a clash with the revamped Rams defense.

I don’t expect Garoppolo to finish outside the Top-20, but he is currently being drafted in the eighth round as the ninth quarterback in drafts. This is too high for a quarterback who has still only made seven NFL starts. His upside is already built into his price. There are several quarterbacks with a current ADP lower than Garoppolo who I would rather draft including Matthew Stafford and Ben Roethlisberger.

Roethlisberger in particular figures to be a much better value in my opinion. He can be had three rounds later and is currently being drafted as a backup. I believed their ADPs should be reversed. Big Ben averaged more fantasy points per game last season than Garoppolo and is a proven commodity surrounding by elite talent.

Let’s focus on the onfield stuff first. LeSean McCoy is a 30-year-old running back. While not necessarily a death sentence, this is generally around the age that most running backs show signs of decline. McCoy is flanked by middling talent at quarterback and wideout. Sure, this may bump up his volume, but the negative game script is also likely to limit his ceiling.

In addition, I have serious doubts about Buffalo’s ability to run the football behind a decimated offensive line. Their unit ranked seventh in 2017 according to Pro Football Focus but lost three starters and is now projected to finish in the bottom-five. This should be a major hit to McCoy’s production. These are not conditions which excite me about a second-round pick.

Now, the off-field situation. McCoy is currently under investigation after allegations of his involvement in a home invasion have surfaced. There were other accusations made against McCoy as well. If any of these turn out to be true, he will likely be suspended for quite some time. Given the concerns both on and off the football field, the price is way too high for my liking.

Even if he avoids suspension, McCoy is not likely to outperform his ADP. Should a lengthy suspension be enforced, any fantasy squad that invests that much draft equity in McCoy is likely to be behind the 8-ball. Drafting a player in the second round who could face a suspension and who figures to struggle even if he does play is a surefire way to ruin your fantasy football season. His entire situation could easily turn him into one of the biggest fantasy busts for the 2018 season.

RB LeSean McCoy: “It’s an open investigation and I’ll leave it at that. Right now my main focus is on my teammates and reaching a championship together.” pic.twitter.com/mALACcUhjC

I really hope I’m wrong about this. I was very happy to see Josh Gordon turn his life around and return to the gridiron last season. His journey has been an inspiration to many and above all else, I hope he can live a long and healthy life.

Gordon recently decided to remove himself from the team in order to focus on his sobriety. He and the team contend that this is a planned absence as part of his treatment, and I truly hope that is the case and that he gets back on the field soon. But something just doesn’t sit right with me about it.

In a day and age where we seemingly know everything about everyone, this news threw many for a loop. Additionally, there has been recent speculation tying Cleveland to free agent wide receiver Dez Bryant. The timing of these two stories makes me a little skeptical. It doesn’t pass the smell test to me.

Gordon is currently being drafted in the fourth round of drafts. His upside is largely built into his draft price. And as is the case with McCoy, there is an outside shot that he misses significant playing time or does not even see the field in 2018. Situations like this are what fantasy busts are made of.

Perhaps we will receive some clarity over the next few days. And again, I sincerely hope I’m wrong about this whole situation. But as things currently stand, I cannot justify drafting Gordon in Round 4. Even if things check out and he returns to camp and starts the season, the risks simply outweigh the rewards for me. I do not want to ruin my season by taking “maybes” early in my draft. I want known commodities early and I will take my fliers late.

Keep these fantasy busts in mind and head on over to Fantrax to join a league today!