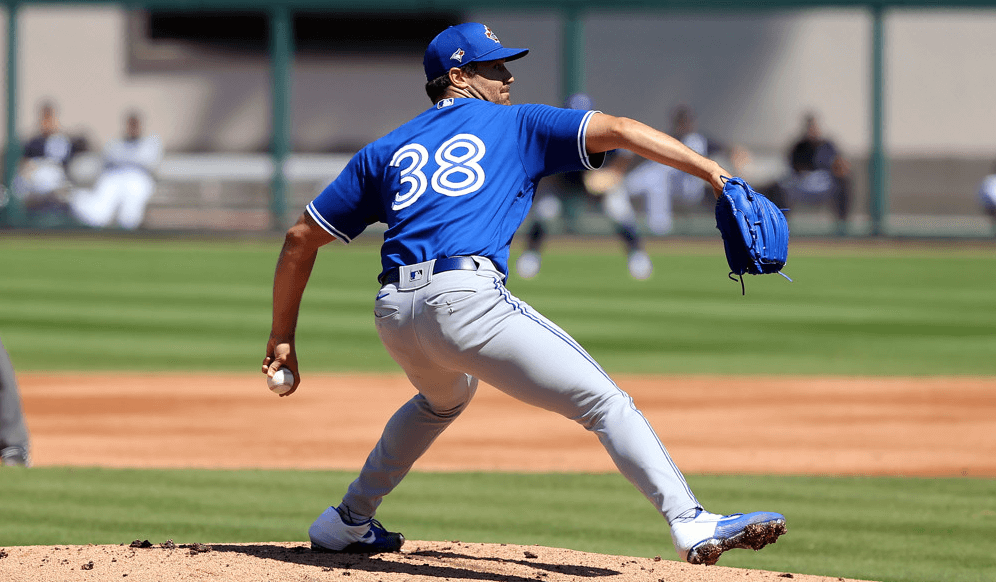 Congratulations, Fantrax HQ perusers! We’ve made it through the first month of the season. Do you really deserve congratulations? I have no idea! Maybe you’re in last place. So, congratulations on, ehh, still reading stuff like this and not giving up already? That sounds good. Congrats, non-quitter!

With a month in the books, let’s look into some of the most and least fortunate starters thus far per ERA-FIP. 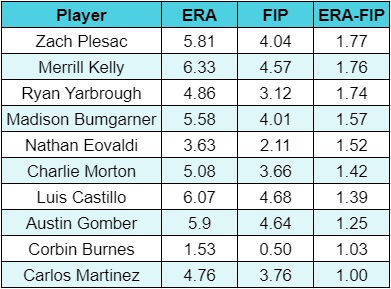 Now for the ten most fortunate starters per ERA-FIP. 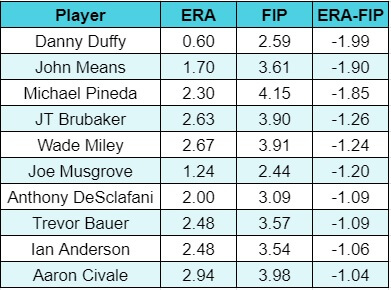 Robbie Ray, TOR (+13) – I bumped both Ray and Dylan Cease up this week. They fell in right next to each other in the ranks. They’re both high-upside, highly volatile starters with extreme control issues. Ray, however, has been showing promise in terms of his control. He hasn’t issued a walk over his last two starts. He’s been pounding the zone with fastballs, a pitch which has seen a velocity bump of a tick and a half. His strikeout rate is also down, sadly, but that’s to be expected to an extent thanks to nearly 8% more fastballs and 12.7% fewer sliders. His K% will rebound, although probably not to his typical 11-12 K/9 range.

Triston McKenzie, CLE (-25) – McKenzie is one of the most interesting young starters in the game. He also stands 6’5″ and weighs about 20 pounds, which has given him issues in terms of maintaining velocity. His average velo on the year is down a tick and a half to 91.3 MPH. To make matters worse, he can’t find the strike zone. He has issued 18 walks in 18.2 innings. Woof. He has also given up eight barrels already on the season – one less than he gave up in 33.1 innings last year – for a horrendous 21.1% Barrel%. On the bright side, he’s still getting a ton of whiffs, so there’s some optimism he can right the ship. While he’s still ranked inside the Top 100 (for now), I wouldn’t be starting him until he strings together a promising couple of starts.

Shane McClanahan, TB (SP69) – McClanahan is immediately the most Irish-sounding name in baseball. If I had my druthers, I’d just call the guy Ian McShane McClanahan and give him a television series. Ian McShane plays a gritty 78-year-old baseball player who’s giving it one last shot, and he’s not taking anybody’s crap anymore. His home-to-first time is seventeen seconds, and he carries a spitoon with him while he rounds the bases. (Said in my best movie trailer-guy voice) Ian McShane IS Shane McClanahan IN “I Don’t Need A Walker To Take A Walk” in theaters this Fourth Of July – don’t forget your Cracker Jacks and prune juice.

In reality, McClanahan is a spry 24-year-old with absolutely electric stuff. He’s a lefty who can touch triple digits with the fastball, sitting 97.4 MPH on average in his 2021 debut. He also has a nasty slider, changeup, and curve. The slider earned a super sexy-time 58% CSW in his first start against the A’s, sending Twitter into convulsions. He only went four innings, however, which may be the issue for him this year. He can’t be expected to go deep in many (if any) starts, especially if the Rays piggyback him with Luis Patino.

Luis Garcia, HOU (SP80) – One of approximately three million players named Luis Garcia in the Fangraphs database, this particular Luis Garcia has me looking curiously at him due to his recent performance. He’s been spot starting in Houston’s rotation, tossing five innings against the Mariners in his latest effort. He gave up one run on just three hits with no walks and six K’s.

Garcia has a deep repertoire, with a 93.5 MPH heater, cutter, slider, changeup, and curve. His slider has a 41.7% whiff rate and .068 wOBA (.162 xwOBA), giving righties fits. He has earned a 93rd percentile chase rate across his first 20 IP, as well as a solid 30.9% CSW. His fly ball tendencies may get him into some home run issues, and his control can be spotty, but he’s worth a flier in deeper mixed leagues. Even though I’m interested, however, I’d probably pass on his next scheduled start in the Bronx.

If you like Nathan’s take on starting pitcher rankings, then you’ll also want to check out Eric Cross’s latest fantasy baseball waiver wire.