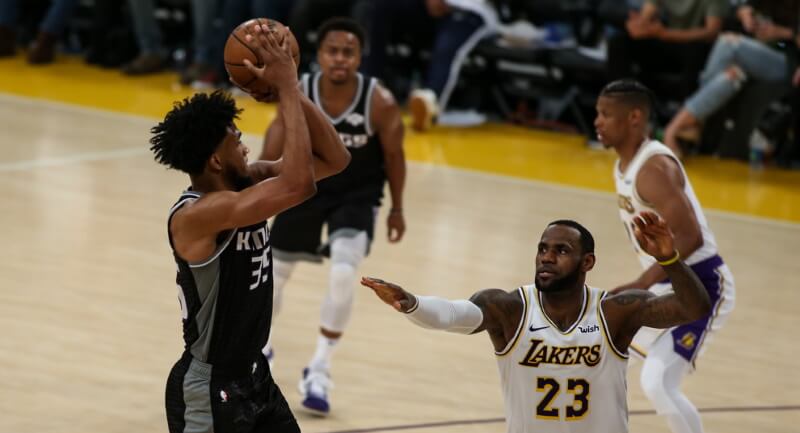 Here we go! Championship week is here! Some leagues may be over or in the semis but either way congratulations if you’re still alive! Maximizing as many games played as possible remains one of the main strategies for the week as well as targeting players with something to play for. Stars like James Harden can be dropped as he won’t be helping you out here on the sidelines. Here are a few players that can help you big for the week!

With a five-game slate, Saddiq Bey earns the top add of the week! The Pistons continue to rest veterans like Mason Plumlee giving the rookie Bey all the opportunity he needs to have a monster week. Bey is on another great run averaging 22 points, 8 rebounds, 3 assists, 1.7 steals, 1.0 blocks, and 4.7 3PM over his last three games. Bey just broke Stephen Curry’s rookie record of nine games with at least five three-pointers made! He might double that stat this week! Watch out!

After missing over a month and a half with a hand injury Marvin Bagley is back! The third-year pro dominated on Sunday posting 23 points and 9 rebounds and was supposed to be on a minute’s limit, but Head Coach Luke Walton couldn’t resist! Bagley has now scored double-digit points in 16-straight games! Is this Championship waiver wire material? I think so!

If you need rebounds, then Guillermo Hernangómez is your guy. All he does is rebound!  Steven Adams is out with a toe injury and Willy is taking advantage posting at least 10 rebounds in four out of five games averaging 11.0 rebounds per game during that span. Not to mention 13.8 points, 1.5 steals, and shooting 68% from the field. That’s better than my grade 12 Calculus and Data management scores! Sign me up for Willy!

The Cavaliers are ravaged by injuries right now including the recent shut down of Larry Nance due to a fractured thumb so it’s back to Cedi Osman time! Osman was great on Saturday posting 15 points, 7 rebounds, and 11 assists and few players can touch them all like Osman can on the waiver wire. Osman has scored at least 14 points in four of his past five games including 32 minutes per game during that span!

Derrick White is not expected to return this season after suffering an ankle sprain so enter Lonnie Walker IV. Walker is fresh off scoring at least 23 points in two his past three games and is averaging 21.7 during that span. The minutes is the key here going from 17 minutes two weeks ago to 31.4 last week. Pick him up!

Moritz Wagner time in Disney! The Magic are another team riddled with injuries this week and with golf season already underway in Orlando, there is no reason to rush back guys like Chuma Okeke, James Ennis, and Terrance Ross. Wagner took advantage with 34 minutes on Saturday versus Memphis posting 24 points, 5 rebounds, and 4 3PM. It looks like Wagner took some tips from his sharpshooting counterpart Davis Bertans in Washington as it’s hard to come by three-pointers from the PF/C position! Ride the wave this week with Wagner as his 24 points Saturday was the second-best mark of his career!