With only 60 games played in the 2020 MLB season, we witnessed a plethora of breakout performances. Now, we have to sift through them all and decide what breakouts we believe in and what ones we don’t trust. That’s what we’re going to try and do today as we discuss which breakout hitters we trust the most for the 2021 season and beyond.

Believe it or not, Kyle Tucker actually made his Major league debut back in 2018, receiving 72 plate appearances but struggling mightily to the tune of a .141/.236/.203 slash line. This came after posting a .332/.400/.590 slash line in the minors with 24 homers and 20 steals in only 100 games. Then, 2019 rolled around and it was the same exact story. Tucker dominated Triple-A with a 34/30 campaign but struggled to receive playing time at the Major League level. Despite his success, Houston already had a solid outfield trio of George Springer, Michael Brantley, and Josh Reddick. Then, when Houston did need a bat, Yordan Alvarez received the call as he was moonlighting as Babe Ruth in the Pacific Coast League.

Poor Kyle Tucker. Luckily, 2020 was a different story for him. Unfortunately, it came at the expense of all us that pair big bucks for Alvarez in drafts, but at least Tucker FINALLY got to play full time, taking the field in 58 of Houston’s 60 games in 2020. And on a team full of highly-talented veterans, the 23-year-old youngster was the Astros best hitter all season, slashing .268/.325/.512 with nine home runs, eight steals, 42 RBI, and 33 runs scored in 228 plate appearances.

That marked the fourth straight season that Tucker paced at a 25/25 power/speed pace or better over 150 games, dating back to 2017. And who doesn’t love a dynamic power/speed asset? If you don’t like hitters that have 30/30 upside, then I don’t know what to say. Tucker’s statcast sliders might not be as red as Juan Soto’s or Ronald Acuña’s, but there’s still a lot of promising metrics here as Tucker was above average basically across the board. 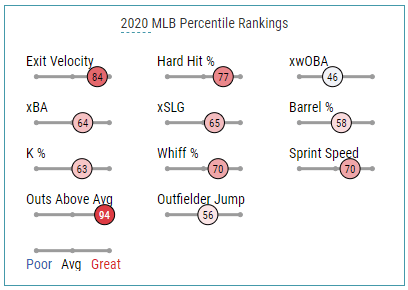 As you can see, Tucker is far from a burner on the bases, but combines his above-average to plus foot speed with an incredibly high base running acumen. Since the start of the 2018 season, Tucker has combined to steal 64 bags on 75 attempts between Triple-A and the Majors for an exceptional 85.3% conversion rate. Houston gave him the green light often this season too, so expect at least 20-25 steals in 2021 and beyond is very reasonable.

As for Tucker’s power, you can feel confident here too. Tucker produced an 84th percentile exit velocity and 77th percentile hard-hit rate along with an ideal 14.9-degree launch angle. Tucker always had plus raw power and that raw power slowly translated into more and more game-power as he cut his groundball rate and began generating more loft with his swing, steadily increasing his estimated flyball distances every year of his minor league career. Long story short, Tucker’s power/speed combination is very legit.

The one area you many question a bit is his ability to hit for a high average., While Tucker was a career .283 hitter in the minors and hit .332 in 2018, that’s not likely what we’re going to see moving forward. However, his contact and swing metrics aren’t bad by any stretch of the imagination. Tucker’s 79.5% contact rate ranked 51st of 142 qualified hitters and his SwStr% and Swing metrics were all middle of the pack. Is he going to win a batting title? Probably not. But Tucker is more than capable of maintaining an average in the .270-.290 range moving forward to pair with that power/speed profile and plenty of runs and RBI batting in the middle of a loaded Houston lineup.

Let me preface this by saying, at first; I did not believe in this hitter. There is no way Teoscar Hernandez is this good. He has gone on hot streaks before but has never produced over a full season. These are all things that I believed before diving into his profile.

In this shortened 2020 season, Hernandez slashed .289/.340/.579. His counting stats were also extremely good with 16 home runs, 33 runs scored, 34 RBI, and six stolen bases. In standard 5×5 leagues, Teoscar Hernandez was the 21st most valuable player in Fantasy Baseball, according to Razzball player rater. It was an excellent 2020 season for the Blue Jay’s outfielder, who just turned 28.

Hey Chris, don’t you know that Teoscar has a career 31.6 percent strikeout rate and that his career batting average is .245. Yes, I sure do! I also know his contact percentage is well below the league average, and he has a high swinging strike rate. But you know what, he makes it work. He made notable changes in his approach at the plate in 2020, and it led to success.

So, Teoscar Hernandez was excellent in 2020 and has been solid over his last 162 games. Let me leave you with one more thing. What if I told you that Hernandez had been almost the same player over his previous 162 as a hitter who was the fourth overall pick in 2020 and is going in the first round of early 2021 mocks. You guessed it! Cody Bellinger.

While Bellinger has been better, Teoscar Hernandez has a lot to offer. His early ADP in the #2EarlyMocks is 64.1, which is high, but if you are willing to gamble on the upside, he is worth the pick. Hernandez just turned 28 and is entering the prime of his career. He hits the ball extremely hard, and all of the statcast data supports his outstanding season.

Luke Voit is the hitter breakout I believe in because he came into 2020 in the best shape of his life, and that’s all the data we need, kidding. However, on a serious note, when an athlete works hard to improve their body composition and demonstrates a productive stretch – take notice. It’s not like Voit’s jaw-dropping 2020 season came out of nowhere since he produced well in 2019. In the 2019 season, Luke Voit reached career highs in several categories with 21 home runs, 72 runs, and 62 RBI while slashing .263/.378/.464.

According to Fantrax and the Razzball Fantasy Baseball Player Rater, Voit finished third among the first base position behind Jose Abreu and Freddie Freeman. Expect Luke Voit’s ADP to skyrocket, and rank easily as a top-10 first baseman in 2021. Hopefully, we see the progress and production continue for Voit, and a hitter I’m targeting in the early rounds, depending on his ADP.

Regardless of what the clock says, it is Te’ Time for me, so give me all of the Teoscar Hernandez. I was all about him as a sleeper in 2019 based on his potential and underlying metrics. He had an abysmal start to that season, and I dropped him everywhere. In my defense, his triple-slash line on July 1, 2019, was a pathetic .198/.267/.350. From that date on, he hit .259/.340/.582. You’re welcome, America. There were red flags even during those three months, most notably his 35 percent strikeout rate. That caused his ADP this past season to hover around the 300 mark despite last season’s second-half surge.

Hernandez put it all together in 2020. He finished the year with 16 home runs in just over 200 plate appearances. He hit .289 with a 146 wRC+ and even matched a career-high with six stolen bases in seven attempts. Hernandez ended up 18th among hitters in our Player Rater, and 11th in Razzball’s dollars earned per game metric. He still struck out a lot (30.4 percent), and his BABIP was a bit on the high side at .348. However, Hernandez is likely to carry a high BABIP because he blisters the baseball when he hits it.

Hernandez is among the elite hitters in the game in exit velocity (including exit velocity on flyballs and line drives), hard-hit percentage, and barrels per plate appearance and batted ball event. He hits in the middle of a stacked and improving Toronto Blue Jays lineup, which should give him plenty of opportunities to score and produce runs. I would expect a batting average closer to .259 than .289 next year. But if he can chip in 12-15 steals to go along with his prodigious pop, Hernandez should be a fantasy stud for years to come. He should make for a solid second outfielder in fantasy next season, especially for those who secure batting average in the early rounds.