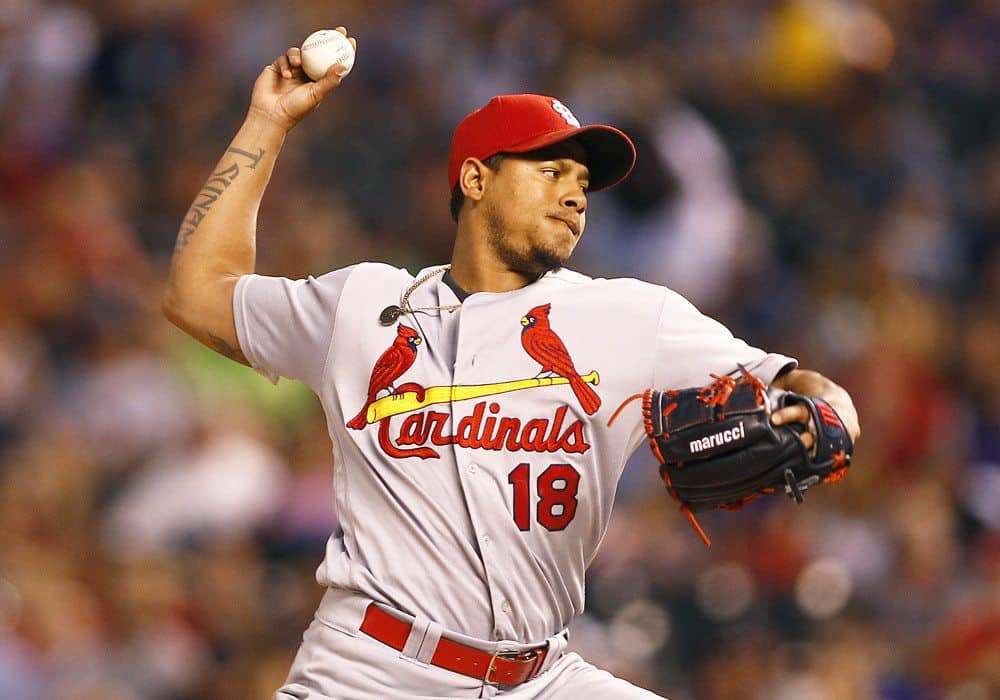 Actual regular season baseball is great and everything, but there’s something to be said for this time of year. I like to think of it as a time for the “dreamers,” a time when mock drafts give us hope that we might be able to draft the perfect team in our real-life fantasy leagues, even though you and I both know that’s never going to happen.

Articles like these are fun because they make me look smart. Then in six months time when 75% of my draft day targets have mediocre seasons, it’s your turn to look smart by saying “I told you so.” Until then, here are my guys, the ones I’ve been queueing in the mid-rounds of my drafts. Disclaimer: If they don’t work out, remember to forget this article ever happened.

For too long, Castellanos has quietly satisfied fantasy owners, and since his ADP among third basemen ranks just 13th — three spots ahead of Eduardo Nunez — it seems like we could be short-changing the 26-year-old once again. Sometimes we can get too caught up in ADP, though, and begin to ignore exactly what’s in front of us. When it comes to Castellanos, let’s keep it simple: The Tigers have lost Justin Upton, J.D. Martinez, and Ian Kinsler, leaving the heavy load of whatever offense Detroit can muster up this season firmly on his shoulders.

The good news is Castellanos finished with the fifth highest hard-hit rate in the Majors, and although the rest of the Tigers’ bats may struggle, hitting in the heart of the lineup should present plenty of RBI opportunities for the fourth-year star. Players themselves live by the motto: “You’re only as good as your last game,” but perhaps we should be saying Castellanos is only as good as his last real month in baseball. He finished September with a .359/.377/.632 line, fitting in nicely with the home run he hit in the final series against the Twins, gifting Castellanos his first 20-homer season in the Majors.

Real talk: This isn’t a top-10 third baseman (yet), but the value he holds as a mid-round option can’t be stressed enough. It looks like Castellanos will hang in the outfield again this year, giving you not only multi-position eligibility, but also some strong numbers in just about every category.

How quickly we forget. Two years ago, Sanchez led the league in ERA and was actually a Cy Young candidate at one point. Then 2017 happened. Blisters sent him to the DL on four separate occasions, as fantasy owners whined about what was supposed to be an elite pitcher hitting his stride.

So have we totally forgotten about that breakout season? We’re talking blisters here, not Tommy John, and although Sanchez pitched in just 36 frames last year, this is still a 25-year-old righty that can throw his fastball over 98 MPH. All that needs to happen now is smart pitch selection and something Sanchez isn’t exactly known for: strikeouts.

As an extreme ground ball pitcher, Sanchez’s “stuff” took a beating last year. His sinker allowed a .314 AVG against, while his fastball also walked 11 hitters in that small pre-injury sample size. Again, the operative word here is “injury.” How much of Sanchez’s brief 2017 numbers were due to those blisters? And can he finally get all of that velocity and curveball spin to equal strikeouts? As an owner, you wouldn’t want Sanchez as the anchor of your rotation, but I do think the potential reward is worth the risk.

Wait, what? Twenty-four home runs in 216 plate appearances? I am very aroused.

People will (as they should) get carried away in the Rhys Hoskins hysteria, but if you’d like to draft another promising first baseman just a little later, Olson is your guy. In short, he walks and can hit for power, and is prone to the odd strikeout or three. As far as those whiffs go, Olson’s small sample size strikeout rate of 27.8% is a little alarming, but he could wind up to be a much safer pick than Joey Gallo.

There will, of course, be a “cooling off” period for Olson at some point where we see him crash back down to earth, but this is a player I’ve found myself trading for due to just how overlooked/underrated he is. Olson hits a ton of flyballs, which in turn should always equal a positive HR/FB rate. But if you need further convincing, allow my colleagues Andy and Ralph to elaborate further:

There are two sides to Martinez’s stats. You could choose to focus on his 3.64 ERA, or you could choose to focus on the fact he faced the third most batters (858) and threw the fifth most innings (205) in the Majors last season. Due to that heavy workload, you’ll need to excuse Martinez’s career-high 27 home runs allowed for just a moment, and remember that this is a 26-year-old who still looks like a future Cy Young candidate.

What I like about Martinez is his durability as well as his reliability. He strayed away from his fastball a little less last season, and instead we saw a four percent increase in his sinker and slider usage. Last season his slider generated a career-high 143 strikeouts and a career-low .143 AVG against, which explains his line drive rate coming in at under 20% for the second season in a row.

Martinez is, of course, the Cardinals’ ace, but he’s always been just that one step below an “elite” starting pitcher, even though a lot of the numbers indicate that’s about to change. Sure, that crooked home run number means something, but just remember, nearly every pitcher struggled with the long ball last year, and they probably will for the foreseeable future. Instead, find value in Martinez’s career low WHIP (1.22) and his incredible ground ball rate (51.3%), which, by the way, was the sixth highest in baseball last season.

Never has a player who strikes out nearly 30% of the time ever looked so enticing. Santana compares to Oakland’s Khris Davis due to that inflated K-rate, but I like to think he holds a little more value thanks to one thing: stolen bases. Have you ever seen a 6-foot-5, 220-pound dude with a beard swipe 15 bags? Rewind to 2017 if you haven’t.

Santana also smacked 30 homers last season, and at just 25 years old, he certainly has the tools to raise the bar even higher. He’s prone to the swing-and-miss stuff,  evident in the ninth-worst swinging strike rate on pitches thrown outside the zone. But you as a potential owner needn’t worry, as Santana actually shows strong plate discipline, even if it isn’t always consistent.

Since Santana is falling somewhere between the eighth to tenth round, just remember, he’s not going to be perfect. He balances out his flaws with numbers like a 12% walk rate, though,  and a hard-hit rate that has grown from just 33% all the way to 40% over the last three years. I doubt we see a repeat of Santana’s .363 BABIP this year, but he’s the ideal outfielder to draft if you’d like to focus on thinner positions like first and shortstop early. There are some playing time questions here after the arrival of Christian Yelich and Lorenzo Cain, but Santana should still get close to everyday playing time. He’s too good not to.

If you’re in a 10-team league, you should be able to pluck Melancon off waivers at some point. In any league with more than 10 teams, I always encourage owners not to pay for saves. However, if you do choose to take that advice, just consider Melancon if you really don’t want to reach for a top 10 closer in any kind of deep format.

It feels like a lifetime ago, but you don’t have to look back very far to see why I think Melancon could be special again. His 2016 season was just that, finishing with a 1.64 ERA and 47 saves, tied for the second most in the Majors. Don’t get me wrong here, there is a lot of work to be done, especially since Melancon is coming off season-ending surgery on his forearm. When his cutter and curveball are on, though, he’s one of the scariest relievers in the game. But can he successfully reach 91 MPH on that fastball? These are the questions that need answers.

One thing we do know is Melancon will be in line for saves, at least for the start of the season. Opening Day was disastrous for the 31-year-old last year, but after mowing down three straight hitters during his Spring debut last Wednesday,there ares signs of encouragement and reasons to roll the dice if you don’t want to pay top dollar (or draft pick) for a top-five relief arm.