March is here, and that can only mean two things: Draft season starts now, and Tim Tebow is making headlines … again. I promised myself a long time ago that I wouldn’t include Tim Tebow in any of my baseball writing. As draft day approaches, I regret to inform everyone that I’ve broken that promise.

I’d have to say I partly agree with the Mets reverend here. In a sense, winning leagues may actually make us worse people. All that bragging, antagonizing, and trash talking of league mates can’t be good, but it’s why we play fantasy sports. We play for championships. Here are a few of my personal draft day targets to help you do just that. WIN A CHAMPIONSHIP.

Freeman has as clear of a path to being the No. 1 player at his position as any player currently not being drafted as the No. 1 player at their position. In some leagues, Freeman is being drafted as the No. 4 or 5 first baseman off the board. We are talking about an extremely undervalued hitter who slashed .341/.461/.748 with 14 home runs and four steals in his first 37 games before his hand injury last year. Freeman is a first-round pick that is being pushed into the second round only because of the logjam of talent at the top of the position. Take the discount. Thank me later.

Paxton was spectacular last season in his 136 innings pitched, striking out 156 batters with the help of 95-100 MPH four-seam fastball. Because of injuries, we have yet to see peak James Paxton. But trust me, it is coming. Paxton, despite missing time in 2017, still managed to be the 18th best starter in fantasy, according to ESPN’s player rater tool. Considering his current Fantax ADP is 79th overall and he is being drafted as the 21st starting pitcher off the board, this pick is all profit. Using the graph below, we get an idea of Paxton’s true value as it stacks up against the top 20 starters off the board this year. 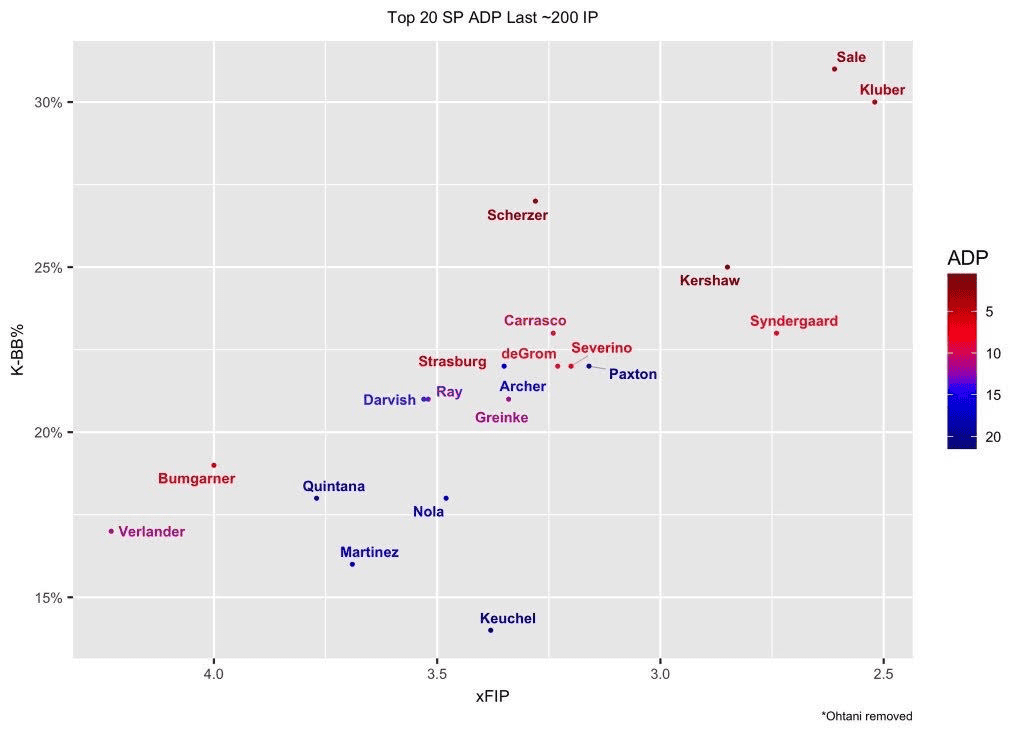 Get excited, folks. Acuna is a five-tool phenom with a clear path to 450 at-bats with the Braves this year. The kid has absolutely torched the ball at every level throughout his development. He is a future first-round fantasy asset and one who can help you dominate in all of the standard categories. Curious about what his production has been in the minor leagues? Insane. Acuna has 24 home runs, 52 steals, and a .328 batting average over his last 162 minor league games. All of this while playing at levels above his age and producing at the top of his class. This is not a drill, people. Draft accordingly.

As starting pitcher innings continue to steadily decline, non-save middle relievers become more and more valuable in standard formats. Miller is the poster child for this role … literally. He has his own role in baseball called the “Andrew Miller” role. He is easily baseball’s best reliever that is not tied down to any particular inning. These high-strikeout, solid-ratio stud relievers are making more and more of an impact, and so far the ADP has yet to catch up. Miller around pick 180 is absurd value.

All Nelson Cruz has done the last four seasons is crush baseballs and produce ungodly type counting stats. If you strip away the stereotypes that come with hitters in their late 30s, you can make an argument for Nelson Cruz over Giancarlo Stanton straight up this year. Thankfully, you don’t have to choose. Cruz is going 37 picks later, and I’d be happy to take him there in every single draft if I could.

Erase from your memory the Charlie Morton you’ve seen since 2008; he is a new man now. Morton reinvented himself by adding some additional velocity, which has changed his approach altogether. “I’m a different pitcher,” Morton said on SiriusXM radio in January. “My attitude is a little bit different toward pitching. I don’t focus too much on my mechanics. I focus more on how I feel. I focus more on letting the ball go and trying to feel natural. I like that. I like going out and feeling like I don’t have to worry about my mechanics all the time.” The numbers don’t lie. Morton has 3.68 ERA and a 1.20 WHIP in his last 164 innings. Prior to that, his career ERA and WHIP were 4.54 and 1.44, respectively. His K/9 during that 164-inning span is elite, as well. Ten strikeouts per nine innings in 2017 ranks him among the top-15 starters in baseball among who threw at least 140 innings. Morton might be a fantasy ace this year. If he is, I’m going to make sure he does it on my team. 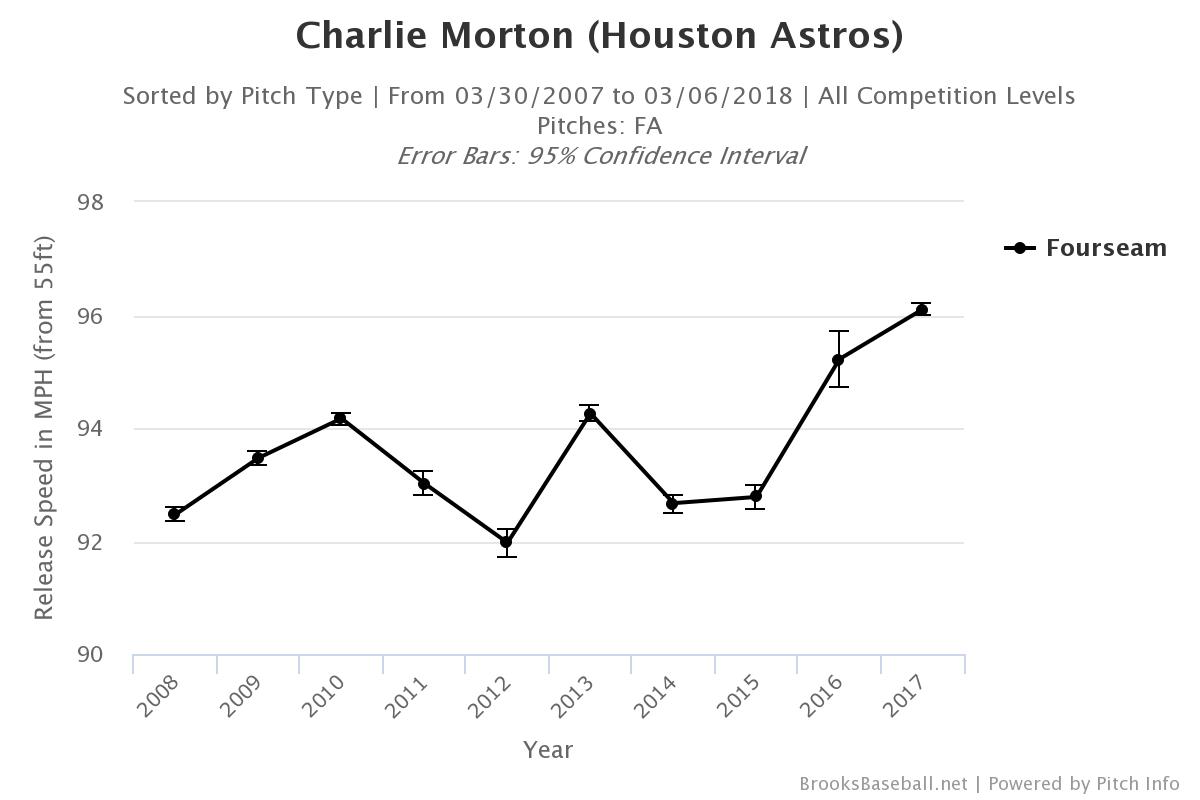 Chris Sale is a freak. He led the big leagues with his 214 innings pitched last year, which helped him run away with the most strikeouts in baseball (308!). Sale had almost 15% more strikeouts than runner-up Max Scherzer. You have to go back to 1999 Pedro Martinez or 2001 Randy Johnson to find the last time a pitcher posted a higher K/9 than Sale did in 2017. Innings, Ks, elite ratios, wins. Sale is the complete package and is currently being drafted as the fourth starter off the board in most leagues. Absolute steal.

Bell is a breakout pick for me this year. Similar to Ryan Zimmerman, who was one of my breakout picks last year, Bell would greatly benefit from a slight launch angle adjustment. If you missed out on Zimmerman’s 30 home run prediction last year, you may want to heed this warning and take the bait. Bell has some strikingly similar skills and tendencies to Kris Bryant, and the only missing piece to the power production puzzle is a bit more loft in that sweet switch-hitting swing of his.