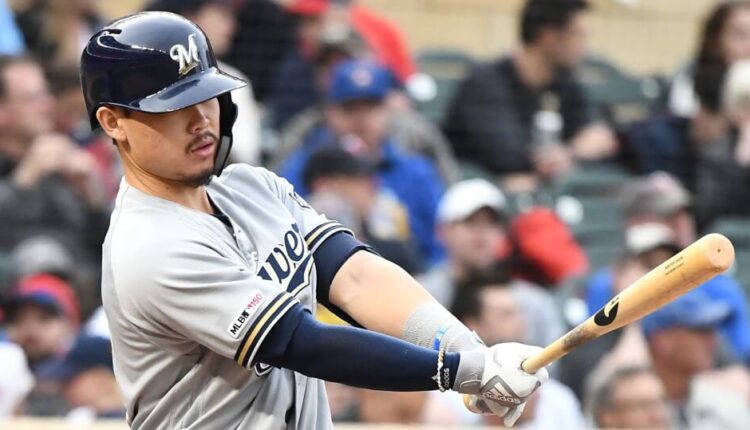 Welcome back to another article! We’ve seen quite a World Series so far! The two No. 1 teams in their respective leagues have not disappointed as this has been as much a back and forth World Series as I can remember. While it’s been a treat watching nearly every playoff game that I possibly can so far, I’m very excited to be looking ahead to next season. In a season in which a global pandemic was occurring and we only had 60 games of data, it is incredibly hard to make assessments about players and their performances, and that includes Keston Hiura, who I’ll be looking at in this article.

This offseason, I’ll be doing a series of articles looking at what went right, what went wrong, and the overall 2021 outlook for certain players. I can only take into account the data that has been given and use that to best assess what to expect from them next season. This should be fun! Let’s dive into our next player in this series: Keston Hiura.

What Went Right for Keston Hiura in 2020

Barreling the Ball at an Elite Rate

Keston Hiura has played 143 games across 2 seasons in the Major Leagues. We have almost an entire season’s worth of data on the type of hitter he looks to be at least early in his career. It’s safe to say so far that Keston Hiura knows how to barrel the ball. He was top 8% of the league in 2019 and top 9% in 2020 at this. Getting the barrel on the ball will result in 98 mph or over velocity off the bat, along with a great launch angle for fly balls and home runs. This ultimately results in an increase in the chance of doubles and home runs. This is a great skill for a young hitter to have.

At a position where power is almost non-existent, Hiura provides plenty. Only five second-baseman in 2020 reached double-digit home runs and Keston Hiura was one of them. In fact, over the last two seasons, only 3 other 2B eligible players have more home runs than Hiura. This becomes a premium factor at a scarce position and with the power already in his back pocket, Hiura can improve on other aspects and have this high power floor.

Last week, I struggled to find much tweaking needed to Luis Castillo’s game. It is the complete opposite here. For those in fantasy baseball circles, it was already known that Keston Hiura had a putrid strikeout rate. It was 30.7% in 2019 which was bottom 4% of the league. What did Hiura do in 2020? He upped that to a stunning 34.6%, also, bottom 4% of the league.

You expect to see hitters as they get acclimated to big league pitching to slowly decrease their strikeout numbers over time. Hiura went in the opposite direction and if he keeps his strikeout percentage this high, will find it hard to crack the lineup consistently if he were to go into a slump.

Not only was his strikeout percentage going up, but his walk rate went down. It went from over 7% in 2019 to 6.5% in 2020. While not as significant a change as the strikeout percentage, it’s never good to see walks going down while strikeouts elevate. Keston Hiura will have to make these trends go in the other direction.

Hitting Analytics Down Across the Board

Where should we start? Oh boy. Let’s start with the negative trend of the ball coming off the bat. Hiura’s Exit Velocity, Launch Angle, and Sweet Spot Percentage all took big hits in 2020. Next, what about batting average and slugging percentage? Both his actual and expected stats took major nose dives in 2020. Hiura’s batting average was .303 with a .570 SLG in 2019.

Those stats look great but when you peel back the curtain and look at his expected stats in his rookie season, there was cause for concern. That .303 average was projected to be closer to .265 and his .570 SLG slightly lower at .530. This set the tone for his dip in production although a lot more drastic at a .212 BA and .410 SLG respectfully in 2020. Even Keston Hiura’s weighted on-base percentage (wOBA) went down like crazy going from .388 to .299. Long story short, his hitting as a whole took a major step back in 2020.

While Hiura struggled against the fastball in 2020, it was a lot more discouraging looking at his attempts versus offspeed and breaking pitches. Keston Hiura’s xBA versus breaking pitches from 2019 to 2020 went from .259 to .200 xBA and against offspeed, went from .257 to an ugly .103 xBA. Expected stats as mentioned before in this article and all my other articles are again, a very good indication of what a hitter’s stats will normalize to in a full season.

All of Hiura’s batting averages against these various pitch selections in 2019 showed this regression coming, just maybe not this drastic. When pitchers look at the data and see he has trouble hitting pitches that aren’t the fastball, what do you think he will most likely see in most of his at-bats? If you can’t hit anything besides a fastball, you can become a part-time player really fast in the major leagues.

The last troubling part of Keston Hiura’s game I want to highlight on is what was happening when the ball was put in play. I want to look at specifically his trends on putting the ball in the air versus on the ground. Not surprising to anyone reading this article, but Keston Hiura’s flyball rate and groundball rate all have gone in the wrong direction. Hiura’s flyball rate went down over 6% from last year and his groundball rate went up over 6%.

Keston Hiura was the ninth overall pick in 2017 and the former No. 1 overall prospect in the Brewers system not too long ago. Hiura is 22 years old and has plenty of time to make the necessary adjustments to his game to be a valuable asset whether in redraft or dynasty going forward.

Many in the fantasy baseball industry participated in the #2EarlyMocks 2020 to gain an early understanding of where players are going to be ranked ahead of draft season. This gives everyone a sense of where each player is valued. In these 2EarlyMocks, Keston Hiura is going around pick 70 as the 7th 2B off the board. In a 15 team league, that’s during the 5th round.

I think that the 7th 2B off the board is fair for Hiura. He was being taken within the top 5 last year and that is fairly taking a step back. Hiura is a great target if you are lacking power early on in your draft or decide to wait on a 2B. While Hiura may never be a consistent .300 hitter that maintains a league-average strikeout rate, he can give you 30 bombs. He also can provide a .260 average, drive in a bunch of runs, and provide thump in your fantasy lineup. I would not advise reaching for Hiura but if he falls in your lap at a discount from his ADP to not shy away. Expect a bounce-back season in 2021.

Staff Roundtable: Pitching Prospects to Target in Fantasy in 2021