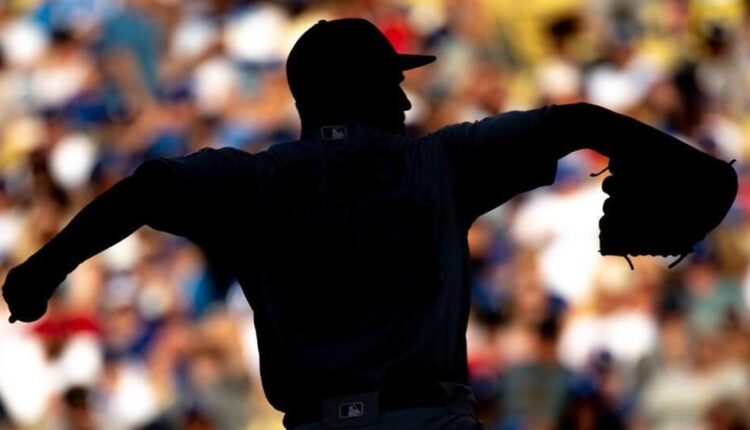 Other useful tools on Baseball Savant include the pitch mix tracker to see a pitcher’s pitch usage, velocity, spin rates, and other metrics on each pitch. Looking for pitch mix changes and increased velocity or spin rates can indicate a potential breakout pitcher for Fantasy Baseball. The movement chart is also beneficial as it helps show the inches of vertical and horizontal movement and the percentage against the average. You can find last week’s article here for more details on useful tools for pitchers on Baseball Savant.

FIP is the first metric we will cover. It stands for Fielding Independent Pitching and is based only on how the pitcher performed. Defense is removed from the equation and factors like; strikeouts, walks, hit by pitches, and home runs. It takes the BABIP luck out of the equation. FIP can be a useful metric to see if a pitcher over or underperformed their ERA.

It can help find potential values in Fantasy Baseball drafts if you find a pitcher who had a low FIP but a higher ERA. Take Zack Greinke, for instance, who in 2020 posted a 4.03 ERA with a 2.80 FIP. That suggests that Greinke underperformed, and his ERA likely would have trended in the right direction over a full season. But be sure to proceed with caution. Some pitchers naturally will be over or underperformers, so be sure to look at the larger picture.

xFIP is another useful metric on Fangraphs. Its major difference with FIP is that it accounts for fly balls allowed and normalizes a pitcher’s home run per fly ball ratio. If a pitcher has a high HR/FB ratio, his xFIP will likely be lower than his ERA. This can be useful for a pitchers future performance. Still, it is worth examining if that pitcher has a history of allowing home runs or pitches in a hitter-friendly environment. xFIP can be misleading, so be sure to look at the bigger picture when using xFIP when looking for future solid performers for Fantasy Baseball.

SIERA is the other ERA estimator used on Fangraphs. Skills Interactive Earned Run Average takes into account pitchers batted ball profile and strikeout rates. If a pitcher induces a high amount of ground balls or fly balls, their SIERA will likely be lower as it is a skill that can help a pitcher carry a lower BABIP. SIERA also considers park factors and whether the pitcher is in a strong hitting or pitching environment.

These three ERA estimators can be useful when evaluating whether a pitcher over or underperformed. Buyer beware! These are not end-all-be-all metrics. They can be useful, but it is important to look into the pitcher’s larger profile. With that being said, let’s look into some of those metrics.

Plate discipline data is useful in seeing the underlying data behind a pitcher’s walk and strikeout rates. For example, when looking at a pitcher’s strikeout rate, I like to look a little deeper at statistics like SwStr%, Z-Contact%, and O-Swing%. Swinging strike rate is how often a batter swings and misses at a pitch. The league average in 2020 was 11.3 percent, while Shane Bieber, whose stats are pictured above, had a 17.1 percent SwStr%. This is usually telling of a pitcher’s stuff and their strikeout ability. These stats are beneficial when ranking and evaluating pitchers for Fantasy Baseball.

Z-Contact percentage is how often a batter swings at pitches in the zone and makes contact. If a pitcher can miss bats even when they pitch in the zone, they usually have a higher strikeout rate.

K-BB% is a pretty simple stat that is simply a pitchers strikeout minus walk rate. This stat is usually stable from year-to-year and is a solid indicator of how good a pitcher’s performance previously was and could be moving forward.

K-BB% has one of the strongest correlations with ERA of any statistic. The fact that it is sticky from year-to-year helps predict how a pitcher might perform. So when you are looking for pitchers to target in Fantasy Baseball drafts, look for pitchers with a high K-BB%. 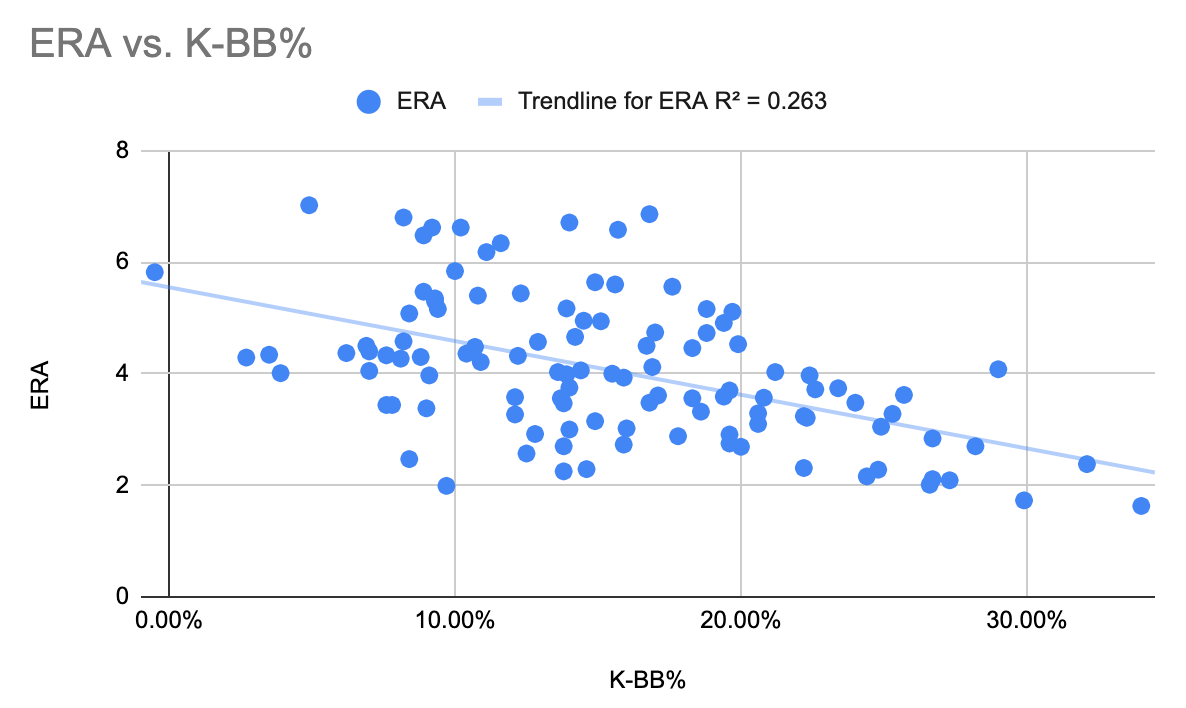 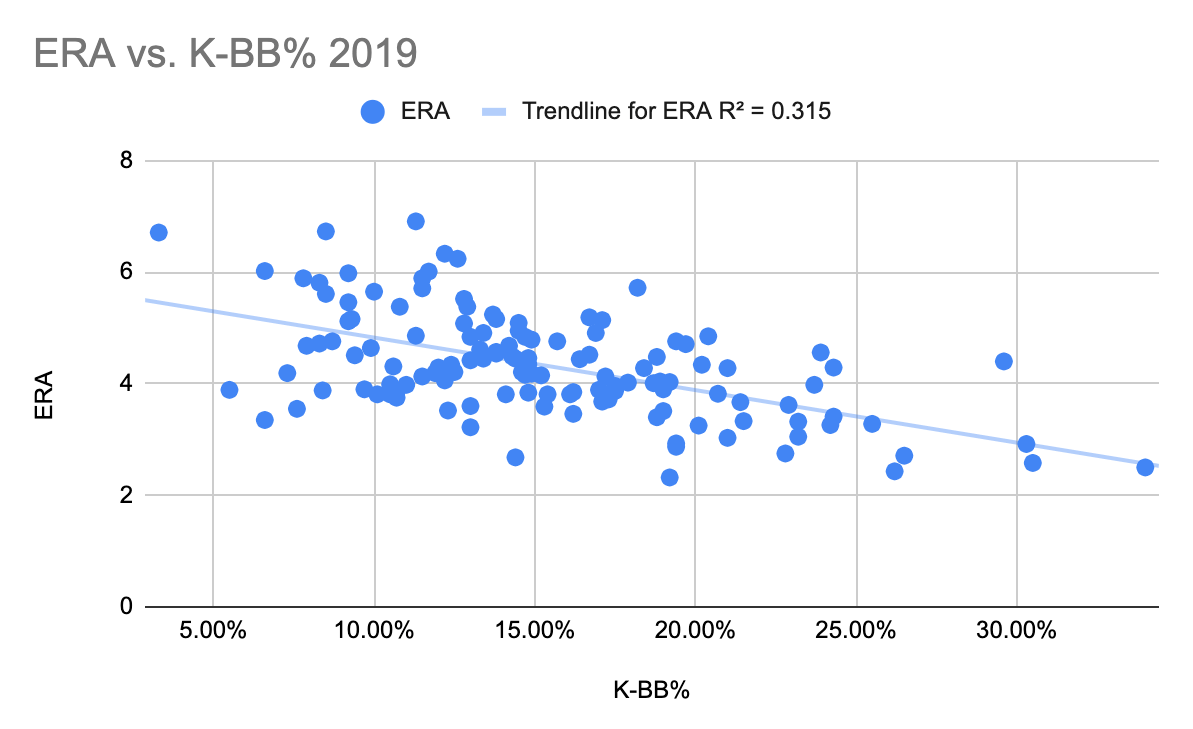 Splits are significant when evaluating a pitcher. First, you can start by looking at lefty/righty splits. There are always pitchers who have extreme platoon splits, and teams know how to exploit that. If a pitcher struggles against lefties, a team is likely to stack their lineup with as many left-handed hitters as possible to exploit that pitcher. If possible, you want to avoid the pitchers that have extreme platoon splits for Fantasy Baseball.

Home and away splits are important to look at but can often be misleading. I would suggest looking at park factors and seeing where pitchers pitch their home games. Take the Rockies, for instance. You know that German Marquez can be an ace away from Coors, but the fact that he pitches half of his games there affects his Fantasy Baseball stock.

First and second half splits can also help check out because they can show improvement or decline over a decent sized sample. You can also look at stats we previously mentioned over half a season to see if there were growth in any particular area like K-BB%.

The last split that is extremely useful is looking at a pitcher’s results the first, second, and third time through the order. Certain pitchers tend to get roughed up the third time through the order, leading their team to pull them before that happens. This limits their chance to pitch deep into games and accumulate stats. It certainly hurts a pitcher’s chances to get quality starts and wins.

Looking at a pitchers heat maps are another useful tool when evaluating for Fantasy Baseball. You can choose all or individual pitches, different counts, or righty/lefty splits on Fangraphs. You can also see how a pitcher attacks certain hitters and see the kind of command a pitcher has. With a pitchers fastball, you want to see it up in the zone and breakers low. Heat maps can be a nice way to justify a change in performance from a pitchers approach.

The truth is there are so many different methods to evaluate pitchers for Fantasy Baseball. Pitchers are so complex, and you can go so many directions when looking into them. It is the reason we all have differing opinions on players, and that’s what makes Fantasy Baseball fun. This is just a small portion of what you can do to evaluate a pitcher. I hope you will find this helpful as you look to begin your preparation for Fantasy Baseball in 2021. If you have any more questions, please hit me up on Twitter @RotoClegg with any questions you may have.