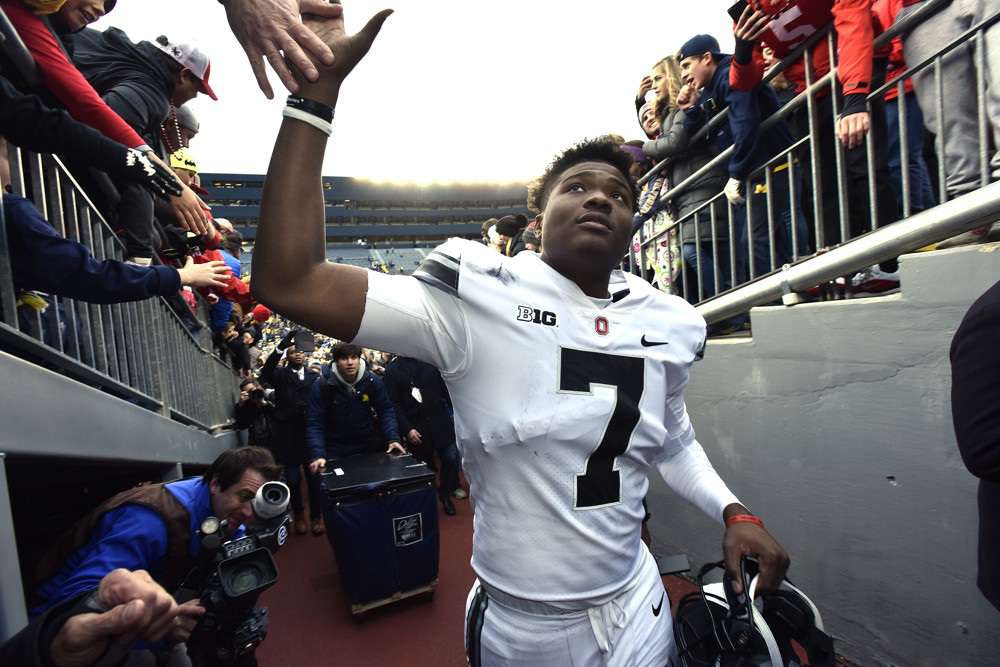 Game of Thrones, MLB, The Masters, and both NBA and NHL playoffs will make April a tremendously fun month. However, there is one thing I know you care about more than anything and that is the NFL Draft! The draft is less than a month away and there are sure to be plenty of rumors, trades and a whole lot more leading up to it. But, while there is so much content surrounding the draft, I look to give you that Fantasy Football spin that I know you desire.

The quarterback position is the most important in the NFL. Any team that pulls the trigger on a QB early on will be making a franchise-defining pick. Drafting a QB can lead to a dynasty or to GMs and coaches being fired. They are that important of a pick. While many in re-drafts are able to get by without having to worry about drafting a rookie QB, it matters in dynasty and even in super-flex leagues. Last year in a dynasty league I was able to snag Baker Mayfield in the second round of the rookie draft and I could not be more ecstatic for that this season. Additionally, while rookie QBs typically do not start to begin the season, they will start at some point this season. Think about it, there were five rookie QBs selected in the first round last year. Only one of them (Sam Darnold) started Week 1, but Mayfield, Josh Allen, Lamar Jackson, and Josh Rosen all started before year’s end. Not only that, but all but Rosen blossomed into viable fantasy options. This year will be no different. While we may not see these QBs start immediately, they will likely take over at some point in the season. Not only should you know about the QBs themselves, but you should know the impact they will have on an offense!

Fantasy Football has really become a year-round hobby, so let’s get into it with my early NFL QB rankings for fantasy purposes!

Kyler Murray is the face of this draft class. He is unquestionably the most intriguing prospect of the bunch and for me he is my top QB. I do not let the height worry me. We heard the same thing about Baker Mayfield last year and he still went first overall and a year later, that looks like the correct decision. Murray set the world on fire in his Heisman winning season, throwing for 4,361 yards with 42 touchdowns to just seven interceptions. Oh, and he added 1,001 rushing yards and 12 touchdowns with his legs. That is exactly why he will be my top fantasy rookie of these QBs. Not only does he have a great arm, but he adds the most value with his legs of any of these QBs.

NFL teams are worried about his size for his ability to hold up over the long-term. However, for fantasy, he has the highest ceiling and it is not even close. I would select him as the first rookie QB off the board regardless of format.

Haskins is the opposite of Murray. At 6’3 and 231 pounds, no one is questioning his ability to hold up in the league. But, they also seem to overlook his 5.04 40-yard dash time. Fun fact, Clemson’s nose tackle Dexter Lawrence, who weighs 342 pounds, ran a 5.05 40-yard dash. Yeah, I am concerned about his running ability. In college, Haskins has one year as a starter under his belt, same as Murray. This past year he threw for 4,831 yards, 50 touchdowns to just eight interceptions and rushed for 108 yards and four touchdowns. While I much prefer Murray, as his rushing ability gives him both a higher ceiling and floor, Haskins is unquestionably the second best QB in this draft. I expect him to go off the board as a Top 6 pick, if the Raiders pass him by I expect the Giants to select him as their QB of the future. He will certainly get a chance at starting in 2019 and I would select him as the second rookie QB off the board in dynasty leagues, as well as in super flex. In super flex leagues, he makes for a great third/fourth QB pick, as he will not start the season, but should get in there by the mid-way point.

I got to say, after the first two QBs in this class, I get significantly less interested. Jones is a three-year starter who is praised for his quick work through his progressions and early recognition of the deep ball. He also gets a lot of praise for working with QB guru David Cutcliffe. However, there is really nothing in the stats that wow you. While he was a three-year starter, he never threw for more than 2,836 yards. He also had a career high 22 touchdowns in his junior year. That is half what Murray and Haskins put up. He also had a completion percentage below 63 percent in each year as a starter. He was below 61 percent in the last two seasons. There is the narrative that he did not have much to work with at Duke and his receivers dropped a bunch of passes. I will not deny that. But anytime there are excuses made up for an early round talent I have flashbacks to Christian Hackenberg. Jones is more of a depth pick with some upside. Target him no earlier than the second round of rookie drafts.

Drew Lock is a big-bodied QB at 6’4 and 225 pounds, who often gets compared to Josh Allen. Much like Allen he struggled with accuracy in college. He posted a 62.9 completion percentage as a senior and was below 58 percent in his previous three seasons. The knocks on him are similar to those of Allen, he fires his fastball on short, easy throws. He tends to throw behind receivers. He also gets knocked for his footwork. While he has a strong arm, I am not so sure it is on the level of Allen. Not even that, the best part of Allen is his running ability. He had a career-high 175 rushing yards and six rushing TDs in his senior year. Prior to that, he had never topped 123 yards or one touchdown. Allen flashed his running ability in college. Lock has the highest upside after the big two, but also needs some polishing. He will go in the first round of the NFL draft, but should go in the second round of rookie drafts as an upside pick.

Fun fact, Grier is the least famous of the three Grier boys. His two younger brothers made it big on Vine and other social media apps and are now millionaires with millions of followers. Grier will soon join them as a millionaire himself. Grier had a long path to the NFL, but really flourished at West Virginia. He threw for 3,490+ yards and 34+ touchdowns in his two seasons at West Virginia. He also had a 67.0 completion percentage as a senior. Grier is an accurate QB, but the knock on him is the lack of arm strength. He will need some polishing at the NFL, but I like his upside. He too, is more of a QB depth/upside pick in the second round or later in rookie drafts.