MLB Prospects Who Have Increased Their Stocks In 2018 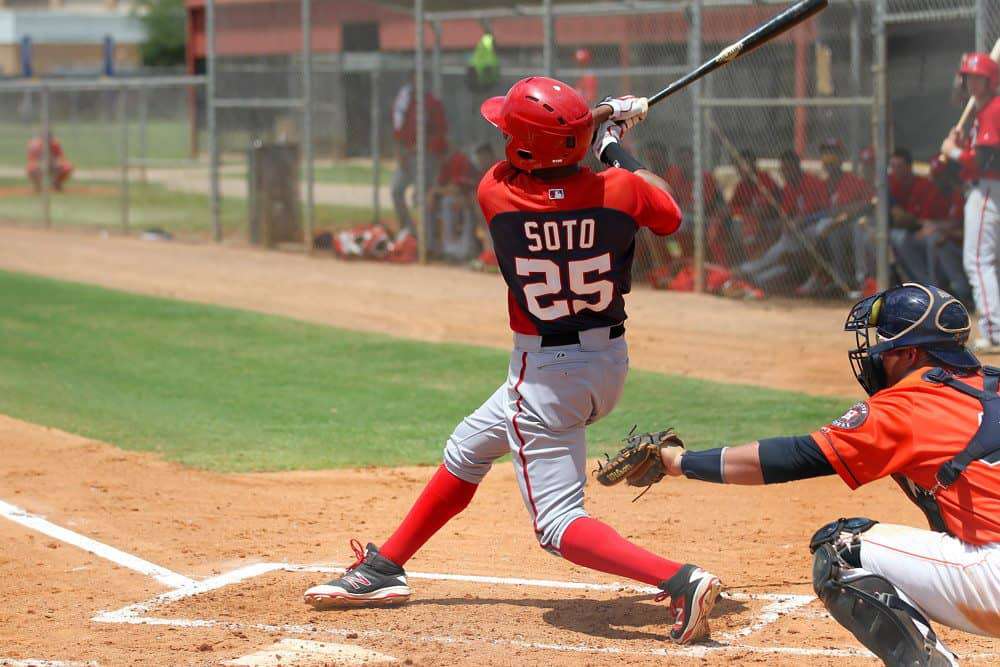 Now that we have moved past the initial and most important round of prospect call-ups (FINALLY Dustin Fowler gets the call), it’s time to take a look at the next crop of prospects who are doing everything they can in the minors to show that they are next Ronald Acuña or Walker Buehler. This doesn’t necessarily mean that these guys are going to be up anytime soon, but it does mean that maybe they move from 50th on the top 100 prospects list into the top 10, or perhaps move onto the list altogether. An increased value can do wonders not only for your fantasy team if they produce, but also as trade chips to use to improve your squad. Some of these are obvious to us prospect hounds, but it bears pointing out just how good they are and how much their stocks are rising.

The value hype train surrounding Juan Soto has already begun picking up steam, and I expect it to hit full-speed by the end of the summer. Already clocking in at number 56 on Baseball America’s top 100 prospects list, the 19-year-old is making waves as a hitting machine with defense to boot. It is one thing to know a prospect has the tools, but it’s another to actually see them in action. And through his first two stops at Low-A and High-A, he has put together 11 homers, 28 runs, 39 RBI, and 2 stolen bases to go along with an insane .386/.485/.789 slash line. I can’t say it enough that this kid is 19. He’s playing in a league against older competition and crushing them. If I’m the Nats, I go ahead and send him to Double-A to give him a real challenge and see what you have on your hands.

As far as what kind of player we have here for fantasy purposes, we’re looking at a four-tool slugger. The hit tool has developed very nicely, and there should be room for a .280-.300 batting average in there somewhere. Although I think the power tapers off a bit right now as he adds bulk to his frame, it should come back and even go into top-tier territory. He’s developed a discerning eye and some good plate discipline as evidenced by his 17% walk rate. He also doesn’t really strike out much with a 14% K rate. Admittedly, this is against Single-A competition, and as I always say, Double-A is where we really see what we have. But we can’t completely discount what this teenager is doing just because of the levels he’s played at. The only real knock on him is that he doesn’t run well, so stolen bases likely won’t be part of his game. And that makes him less Acuña and more Vladdy Jr., which is certainly nothing to scoff at.

I can only speculate when we might see Soto in the Majors, but with the Acuña call-up this season, we can tell that teams are more likely to call up their kids if they think they are ready. And don’t forget that Bryce Harper just might be leaving the team via free agency at the beginning of next season, opening a big piece of playing time for the best of the best. As for top prospect lists, barring an utter collapse, Soto is definitely in the top-10 next year, and to be honest, he’s probably in mine right now.

This one is a bit of a homer pick considering I’m a Halos fan, but trust me, it’s warranted. Marsh was selected as the 60th overall pick in the 2016 amateur draft and was signed as a raw high schooler with a high ceiling, lots of athleticism, and plenty of question marks. Scouts graded him as a potential 50 virtually across the board, with above-average raw power, speed, and arm. The first taste of professional baseball for Marsh was with the Rookie Orem Owlz, where he hit four homers, stole 10 bases, and slashed .350/.396/.548.

This year he made the move to Low-A and has done virtually the same, slashing .327/.423/.538 with better plate discipline. It’s through 123 plate appearances so far, and I don’t see him sticking in Low-A for much longer. He’ll make the jump to High-A soon, and we’ll see how he progresses there. With continued success, he could start next season out at Double-A, and then the rest is up to the health of the Major League team and his own potential.

And speaking of that potential, I see a bit of a Dustin Fowler type here with the exception that he can actually take a walk. That means that instead of sitting in the top 50-ish area of the prospects list, he could settle into a top-25 spot fairly easily. I doubt we see him that high on next year’s list, but I definitely expect him to crack the list and land in the top 75. Along with Jo Adell and newly positioned second baseman Jahmai Jones, the Angels actually have some nice players along the way.

This will be your last chance to get Marsh for next to nothing. If your league rosters 300 minor leaguers, he should 100% definitely be owned. If your league rosters 150 players, I’ll make the case that some team should own him. So check your waiver wires and see if he’s out there so you can scoop him up. If someone already owns him, hopefully they don’t realize what they have on their hands and you can make a move for him.

This one is a bit of a tricky one to include on this list because I’m not entirely sure he even remains on top 100 prospect lists, because he should be up and manning second base for the Padres now and passing his rookie eligibility. However, because the Padres are the Padres, who knows exactly what they are going to do. The point remains the same: Urias is good, and you should go get him for your team.

I saw a lot of people go absolutely bonkers for Keston Hiura this offseason when discussing first-year prospects. To be honest, I saw exactly what I see in Luis Urias: a good hitter who will not hurt you in any category and instead will be a vanilla middle infield option that just produces solid numbers. Hey, they can’t all be Mike Trout, and sometimes the difference between winning your league and finishing second is having a MI option that doesn’t destroy your batting average or OBP.

And Urias is that guy. Over the last three years, his worst average and OBP were .296/.398. Which he did in his first taste of Double-A as a 19-year-old. The kid walks, makes contact, and absolutely will provide you with plenty of both. Now the downside is that he’s not exactly going to light up the scoreboard as far as steals or homers. He’s averaged fewer than 10 of each the last three years, and I doubt that changes too drastically in the immediate future. I think the speed could tick up and there might be some 20 stolen base seasons in there, but don’t be fooled, he’s never going to clear the 10-15 home run barrier (and the only reason I go that high is because, with this ball, everyone hits homers).

Think of Urias as a less flashy Amed Rosario. He’s going to help your team, and I can’t imagine the owner of him thinking too highly of him just because of those low homer and steals totals. You can probably get him for next to nothing, and honestly, he’ll probably be up this season. If not, you’ll see him manning the keystone next year and providing boring but stable value.

Current man-crush of my podcast co-host Nathan Dokken (go read his stuff here), Trammell is busy obliterating baseballs at the Reds High-A affiliate. He’s walking 16% of the time, hitting for average, and proving his fans that the high scouting rating is valid. He was already number 48 on the top 100; look for him to crack the top 25 next year.

Coming in at number 73 on the top 100, we have 23-year-old Diamondbacks hurler Duplantier, who features a plus fastball, plus slider, solid curve, and solid changeup. He has the arsenal to be a solid Major League pitcher, and though I don’t see “ace” in his future, I think there could be some really solid potential here. He’s more in the Jack Flaherty level of SP prospects than the Honeywells/Buehlers, but there’s value to be had and he might still come cheap if his owner doesn’t realize what he has on his hands.

Harrison already made a big leap this year to get on the top 100 list, debuting at number 75. It’s a testament to his raw abilities, which he finally began to tap into in 2017 with 21 homers and 27 steals. He stumbled out of the gate this season, but since mid-April has managed to hit .291 with three homers to up his season stats. It’s his first taste of Double-A and there will be growing pains for his type of talent (raw, developing hit tool), but there’s a ton to like here. I think he really turns it on this summer and we see him somewhere in the top 50 next year.