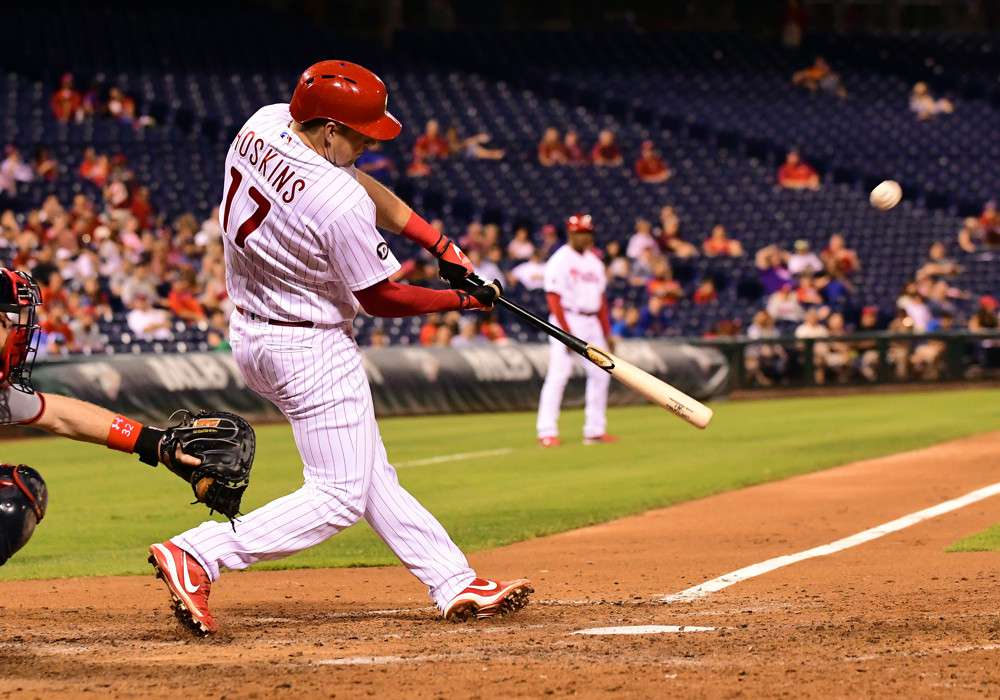 Welcome to the Fantrax Bronze Points Salary Cap Challenge Period 8 Ownership and Claims Report. I have tweaked a couple of the parameters from previous installments of this column. First, I have added a PPG (points per game) column to the tables. We are approaching the point of the season at which this metric can become a more reliable tool for measuring fantasy output. As with any data point, it should not be used as the end-all-be-all of evaluating tools. For example, even though Mitch Moreland is averaging 3.67 points per game, I would still rather own Hanley Ramirez and his 3.58 PPG. Conversely, there are players like J.T. Realmuto and Salvador Perez whose total point numbers thus far have been limited by early-season injuries. Their per-game averages are a reasonable indicator of what we can expect from them going forward.

For potential targets, I used a baseline of 3.50 points per game for hitters. This leaves off plenty of productive bats, but considering that the Bronze Points Salary Cap Challenge game is with 27 periods and just 18 New Player Claims, it is not realistic for anyone (myself included) to claim many of the players I mention each week as it is. I also changed the popularity threshold from 40 percent to 50 percent. Now that my little disclaimers are out of the way, let’s get to it, shall we? Numbers are as of May 8.

Gary Sanchez is batting .193 and leads all catchers in scoring. That’s really all you need to know about both Sanchez’s potential and the dearth of elite catching options. We are patiently waiting anytime Willson Contreras wants to get going. I’m keeping him regardless, but I suspect some owners may start to get a bit antsy.

Following the unmentionable injury to Yadier Molina, the catcher landscape behind Contreras is a bit more open. As mentioned earlier, Realmuto, Perez, and Mike Zunino are back after early injuries and are posting nice per-game numbers. I simply cannot trust Cervelli, and I still prefer Contreras to all of the names on this list.

All three of these players are quite popular, and rightly so. Joey Gallo had another great week and is one of the best Points options around. Cody Bellinger has rewarded patient owners after a slow start. He is back to being a top-five option at the position. Freeman continues to hit at an elite level.

There are a ton of cheap and productive options here, though they have varying questions remarks regarding their reliability, either from a physical standpoint or a production one. Matt Adams has terrorized opposing pitching this month, but he may not see full-time at-bats once Ryan Zimmermann and Adam Eaton return. Keep an eye on Eaton. He is scheduled for a second opinion on his bad ankle. A prolonged absence may make Adams a mainstay in Washington’s outfield. Brandon Belt continues to put up excellent numbers. Healy has come back strong from injury and could be a very stealth source of production going forward. I mentioned Moreland and Ramirez earlier and would much rather own the latter.

As someone who started the year with Brian Dozier over Jose Altuve, I would argue that the only thing worse than paying Altuve’s premium tag for his modest output so far this season is paying Brian Dozier’s 2770 salary for an even lesser return. I still think they will turn it around, but it’s getting harder to justify owning either one at this point, especially given the numbers that many cheap options are posting.

I expect Javier Baez and Yoan Moncada to come back to earth, but so far the Chicago duo has outscored the combination of Altuve and Dozier for just over half the salary. Yikes. Jed Lowrie may end the year with 500+ points and fewer than 50 owners. Hard to beat that. Solarte has made the most of his opportunities, and it’s not like we can rely on Toronto’s other infielders to remain healthy and/or productive. However, it will be difficult to rationalize picking Solarte up over the three players ahead of him on this list. The same can be said of LeMahieu and Hernandez, although at least LeMahieu should have exploitable splits.

Arenado has finally made his way into the top-five, where he’ll reside for the rest of the season, health permitting, of course. I’m officially out of the Alex Bregman redraft business for 2018. If he rebounds and proves me wrong, so be it. I claimed Arenado for him this week. Obviously, this is a hit to my salary structure, but I’ll find a way to make it work. Devers has almost been as unexciting as Bregman, but at least he’s cheaper.

Eugenio Suarez broke his thumb early but came back recently and picked right up where he left off. He ranks in the top-20 in RBI despite playing just 20 games. Escobar has been on a tear lately, but his playing time later in the year may not be as consistent if and when Jorge Polanco joins the club. Moustakas is the most consistent of this group and will likely remain underappreciated because of Kansas City’s subpar offense. Villanueva turned into a pumpkin last week. He should still hit value, but keep an eye on Jaimer Candelario as a less volatile alternative. He hits second in a decent lineup and should see every opportunity with Detroit in rebuilding mode.

It’s hard to believe that Trea Turner already has more points than Carlos Correa considering where he was just two weeks ago. Turner’s slow start can officially be filed away under “small sample size.” Both are clearly elite options going forward this season.

I usually try to strictly highlight cheaper options at each position, and all seems right in the world now that Correa and Turner have regained their expected form, but I had to mention Francisco Lindor here. Lindor is on a tear and is out-producing both Correa and Turner at the moment. Gregorius had a rough week, but it’s not like anyone actually expected him to hit 50 homers this year. Bogaerts will likely outscore Simmons and Story going forward, but I think Story is the easiest of the bunch to time, making him a valuable piece.

Is it possible for someone to be completely worth his salary yet somewhat disappointing at the same time? Submitted for your approval, I present Rhys Hoskins. Hoskins is almost universally owned and has been among the leaders in points among outfielders all season long. But his overall ranking at the position has dipped each week. Hoskins has double the ownership of Mitch Haniger despite Haniger having more total points and points per game. Hoskins is still an every-week start for just about every roster out there, but it’s not as if the outfield lacks for options. The rest of the popular outfielders are studs. Of the ten listed here, only Stanton and Benintendi would be considered disappointments to this point in the year.

As I touched on in my mention of Hoskins, there are a ton of cheap outfielders currently producing at a high level. I’ll spare you a breakdown of each player above, but several players on this list appear to have a level of production which is sustainable. Pollock and Pham have the highest upside but also come with some level of injury risk. Teoscar Hernandez has had a nice run since being called up and is now hitting leadoff, which will only enhance his prospects. Markakis, Rosario, and Dickerson have all been swinging hot bats and deserve consideration. DeShields was a popular sleeper before getting hurt but has been back manning the leadoff position for Texas, which is a nice spot to be in.

Most of the pitchers here are among the elite (mostly) young arms in the league. Syndergaard has not performed on an elite level yet, but he will. Luke Weaver is the only player on this list I’m really concerned about. If he can’t handle San Diego on Friday, he might lose me. Clevinger was primarily picked up as an early-season option in the absence of Danny Salazar, and Clevinger has been good but not great. I would not be in a rush to get rid of him, but there are better options out there, both for the short term and the long run.

In last week’s section, I even suggested that no pitcher was probably worth a claim this week. Still, it was amusing to me that the two starting pitchers I listed in last week’s column had quite possibly the most diametrically opposed starts that two pitchers can possibly have. So, to the 25 people who picked up James Paxton this week – you’re welcome. And to the one who picked up Dylan Bundy this week – I had nothing to do with it. On the bright side, at least it isn’t Roto…

For this week, the only obvious add as of Wednesday is one that I feel should have been made already – Patrick Corbin of Arizona. Corbin is averaging over 20 points per game and is pitching twice in Period 8. He remains critically underutilized at an ownership rate of just 17 percent overall and 14 percent among Top-100 teams. Finding a pitcher to drop can be difficult to find when factoring in salary. Luke Weaver seems like an easy choice, but the price tag may make that a bit difficult. Sean Manaea is another potential option, and his salary is a lot closer to Weaver’s. Manaea looks to have a difficult two-step on paper, but he faces a Boston team which he no-hit last month and a Toronto team who was just no-hit by James Paxton. Garrett Richards is yet another option, as he will have two home starts. Richards has a nice strikeout rate, but walks have been his undoing. If he can regain his control, Richards has decent rest-of-season value considering his price tag. However, I would not go out of my way to acquire him at this point in time.

Doolittle and Vazquez continue to have underwhelming save totals, but owners just have to trust the process. Saves come in bunches, and both Pittsburgh and Washington are playing well enough for a four-save week to be just around the corner for their closers. Hand has been largely dominant, but I think he will get traded somewhere. If you jump on board, know that it is probably a two-month move and not a four-month move. Boxberger has a 1.31 WHIP and a 92 percent save conversion rate. Those numbers don’t seem to go together. I’m betting on the second number becoming significantly lower before the first one does.

Last week I joked that my endorsement of Edwin Diaz would lead to his immediate downfall. About an hour after I submitted that piece, he gave up a game-winning home run on the second pitch he threw that night. Two days after the article posted, he blew a save and gave up two runs. Based on that, I’m just going to start endorsing every single player on the Boston Red Sox. Either that or I’ll run through the rosters of all of my league-mates and just pick out a bunch of their players.

In all seriousness, Diaz is still my favorite add here. Wade Davis has more points and Jeurys Familia has continued to score at a high level, but I prefer the dominance and elite metrics of Diaz. The Toronto situation is worth monitoring following the arrest of closer Roberto Osuna, who is 16 percent owned. However, none of the likely replacements in Toronto are at enough of a discount for my personal liking. Tyler Clippard got the first save chance, but he is more expensive than Hunter Strickland, Keynan Middleton, and Bud Norris, among others.

MLB Prospects Who Have Increased Their Stocks In 2018