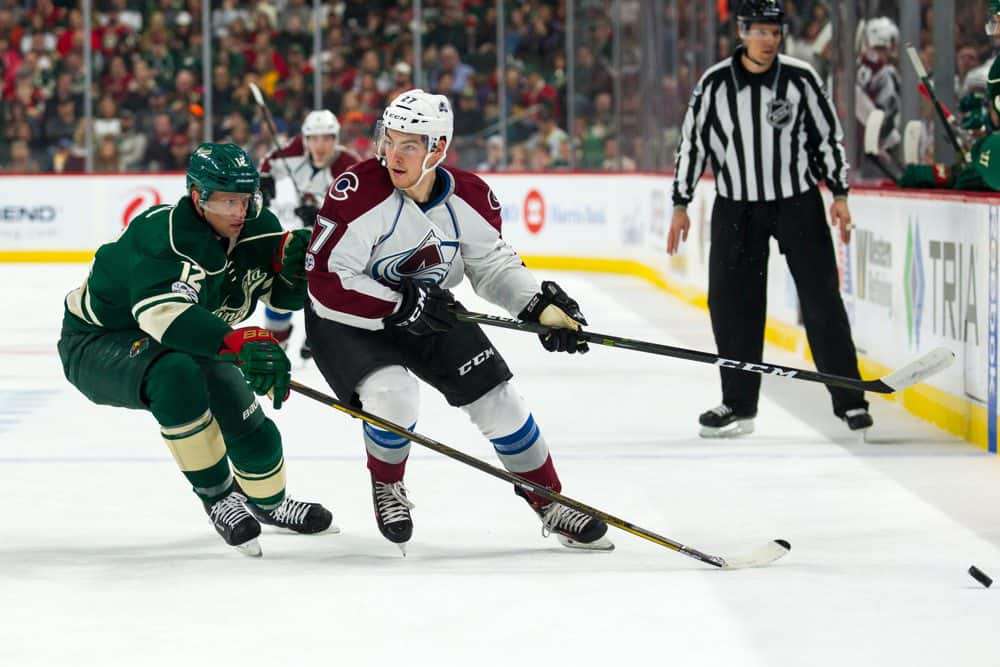 From now until the start of next season, I’ll be looking at each NHL team’s prospect situation and assessing each prospect’s projected fantasy value. With all due respect to turnover leagues, I will be focusing solely on keeper and dynasty leagues, since prospects have minimal value in re-draft leagues. Most fantasy leagues vary in structure, so for the purpose of this exercise, I will be referring to leagues that include a main roster and a prospect roster, each with their own respective draft.

I’ll be examining teams in reverse order of the 2016-17 regular season standings, so this week’s edition will focus on the Colorado Avalanche.

The Avalanche had a season to forget this past campaign, putting up the worst team point total in the salary cap era with 48, only nine better than the inaugural season of the expansion Atlanta Thrashers. To put things into perspective, nobody on the Colorado roster scored more than rookie Mikko Rantanen’s 20 goals, nobody on the entire team had a positive +/- rating and starting goaltender Calvin Pickard lost over twice as many games as he won (31 L, 15 W).

[the_ad id=”384″]Additionally, just when they think things can’t get any worse, the NHL Draft Lottery takes place. Colorado held the highest chance at getting the first overall pick, but ultimately suffered the worst-case scenario when all three draft lotteries were won by teams higher in the standings, pushing Colorado to fourth overall. In a normal year, that would be bad, not terrible, but this year is different, as the level of talent in the draft is nowhere near where it has been in the previous few years. There are no McDavids, Eichels, Matthewses or Laines in this year’s edition, and after Nolan Patrick and Nico Hischier, it’s anybody’s guess as to how things play out.

At four overall, GM Joe Sakic and Co. will still be adding a top prospect that should be able to crack their lineup within 1-2 years and will be joining the following group of prospects:

Rantanen is a very quick and smooth skater despite being a big man, which he uses to draw opponents away from him and make space for teammates. He has silky mitts, and when he combines that with his hockey sense and vision he is able to open up passing lanes and thread pucks through opposing defenders. Rantanen should take notes from teammate Nathan MacKinnon on using his size to protect the puck and drive the net as opposed to trying to out-skill his way through, and his shot could use a little work. However, besides that, Rantanen should be a top-line winger sooner rather than later and should be at or near the top of your prospect draft list.

Colorado’s first pick in last year’s draft, Jost tore up the BCHL league in 2015-16 and then impressed in his first season in North Dakota, notching 35 points in 33 games. He has a wicked release and uses his blazing foot speed to find his way into scoring areas. Despite standing under 6 feet tall, Jost is still very tough to knock off the puck and can control play anywhere on the ice. While Rantanen seems to have a higher offensive upside, Jost plays center and will contribute to peripheral stats like faceoffs and PIM. His faceoffs need work (he won only 40% of draws in his six-game stint with the Avalanche), but that is the case with most young centers. Jost should make the jump to the NHL full-time next season and could be a Calder Trophy candidate. Avs fans should be excited about watching Jost, Rantanen and MacKinnon together for the next decade.

It is no secret that the Avalanche are exceptionally thin on the blue line; they have been rumored to be shopping Matt Duchene for help in that department all season long. They do, however, have reinforcements on the way. Nicolas Meloche plays a strong two-way game and contributes at both ends of the ice. He has the potential to be a 20 minute per game defenseman who can shut you down at one end and carry the puck up ice and bury it at the other using his booming shot. At 19, he is already built like a man and loves to use his physicality to his advantage, but it sometimes draws him out of the play and causes him to take unnecessary penalties. Discipline is something that many young defensemen struggle with, and he still has a lot of time to turn that around before making the jump to the NHL. Don’t expect him to play for the big club this season unless the team runs into serious injuries on the back end, but he is still a great long-term option in deep leagues.

Compher was one of the pieces brought over in the trade that sent Ryan O’Reilly to Buffalo, so the Avalanche understandably have high expectations for him. He may not have the offensive upside that Rantanen and Jost do, but he will earn his paycheck each and every shift. Compher is a heart and soul, character player that every team loves to have, but hates to play against. A close comparison would be Montreal’s Brendan Gallagher. It’s possible for Compher to have a 40-50 point ceiling, but his true value is his leadership and grit. He plays the pest role well and that should help him eventually see top-nine minutes in Colorado.

Bigras took a small step back in his second pro season, amassing the same number of points as the year before (19) but did so in eight additional games, in addition to going from a +2 rating to -16. That being said, he missed a good chunk of the season with a concussion, so he came into the campaign halfway through when everyone else was already in midseason form. Playing catchup after a fairly serious injury is always tough. Avs coach Jared Bednar was impressed with Bigras’ training camp last October and stated that he thought it would be better for him to play big minutes in the AHL. Once he proves he can log big minutes and stay healthy, he should be a dependable top-four defenseman at both ends of the rink. He is a strong skater and makes a good first pass out of his own end, but he needs to be a little more aggressive defensively to be harder to play against. Injuries have dropped his fantasy stock, but pay close attention to the start of Bigras’ 2017-18 season. He may be worth a late pick.

The Avalanche have two big name, blue chip prospects in Rantanen and Jost, and some decent up-and-comers in the pipeline, not to mention whoever they add at with the fourth overall pick. Rantanen and Jost should be first-round picks in regular leagues, so if they drop to around 10-15, they would be well worth pouncing on, while it wouldn’t be unwise to take a flyer on the other Avalanche prospects listed above.

Be sure to check in again next week, when I’ll be looking at the first Canadian team on the list, the Vancouver Canucks. Let me know in the comments section if there’s a player you would add, remove or rearrange. As always, thanks for reading and keep your stick on the ice!