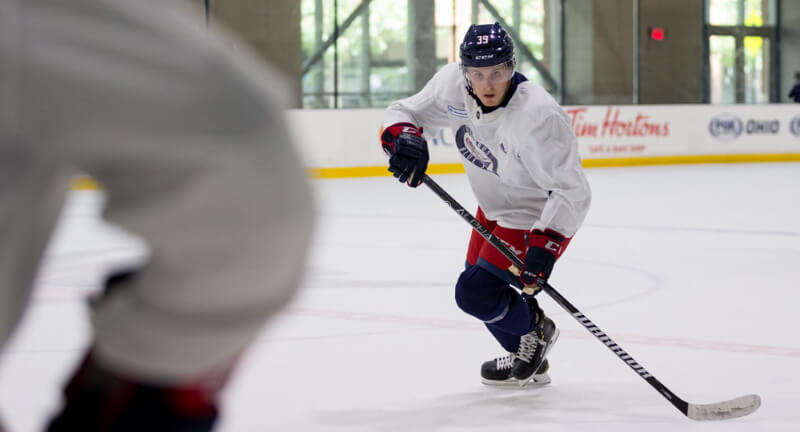 One of the best ways to assert your dominance in a fantasy league is to find the best prospects before they become the best prospects. At the end of the day, the best way to put yourself in a position to do this is with data. With the tools available, hockey is becoming easier to track and identify valuable assets, fantasy owners should do their homework just like front office staff. It’s not silly to spend time and effort improving your team – everyone has an itch, right?

We’d like to do a bit of the homework for you in this column – we’ve identified five players who are valuable, and likely unknown to you until today. We ran some numbers on Fantalytica, the platform we’ve built to help dynasty and keeper teams research, evaluate, and track prospects for your unique league. We used our standard scoring settings to find the top players who likely are available in your league. Let’s take a look.

NHL Prospects You Should Know 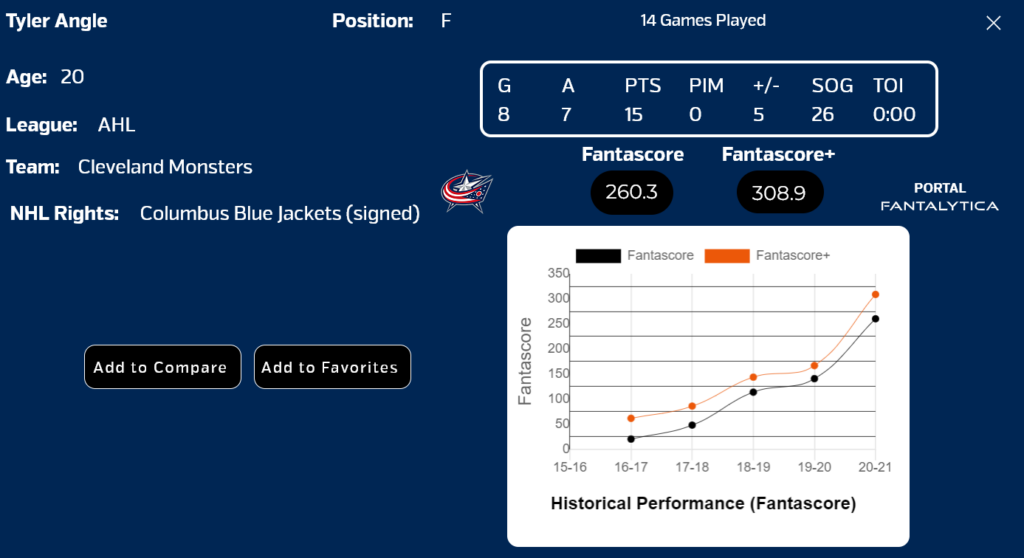 Tyler Angle was a 7th round draft pick in the 2019 NHL Draft. Not only that but he was also taken with the 6th last pick that year. Statistically, he was a surefire 4th round preferred prospect. Something went awry that year, which allowed Columbus to scoop him up. A long shot to make the NHL, Angle worked hard in the OHL to improve his skills on the ice. He joined the AHL squad on an AHL-only deal, leaving him with a small window to find ice time. He took that opportunity and grew into an important player for the Cleveland Monsters. After 14 games, he’s sitting with 8 goals and 15 points, good for 3rd on the team.

The Blue Jackets quickly locked him into an entry-level contract starting next year. From a fantasy perspective, it’s very unlikely you hadn’t heard of him until recently. It’s time you consider him for your team. He’s showing incredible diligence and fortitude, which usually helps a prospect catapult into an NHL jersey. Even in deep leagues, he may be available. If he’s on waivers/free agency, scoop him up tonight. Why wouldn’t you? He’s blowing the doors off the AHL, all things considered. 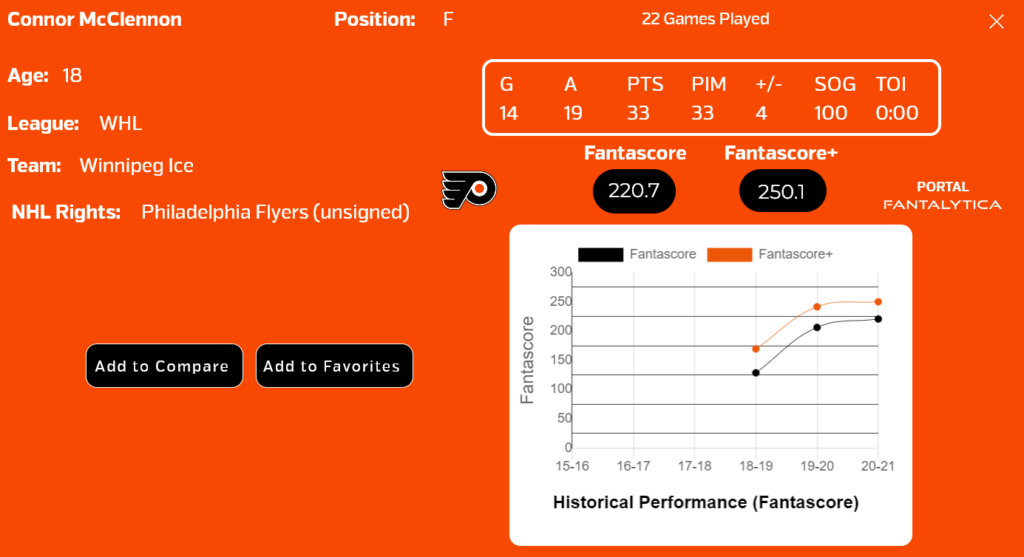 We’ve seen this before. A statistical darling falls in the draft due to size. Chuck Fletcher, although the man who drafted him, let him also fall into the 6th round. The Flyers are already reaping the rewards with McClennon, a skilled forward with a pure scoring tinge. All predictors from Fantalytica say he becomes a solid NHLer. As if the Flyers needed yet another great prospect in the system, McClennon’s worst barricade is the depth his parent organization has at the forward position.

He’ll need to blow the doors off in the AHL for a year or two before he gets the call-up, but Fantalytica has all the faith in him to do that. McClennon is likely available in your league as well, unless your league has a 7-round draft. We reached to grab him in the 3rd round in a few of our leagues. Absolutely consider him if you see him available for (basically) free. 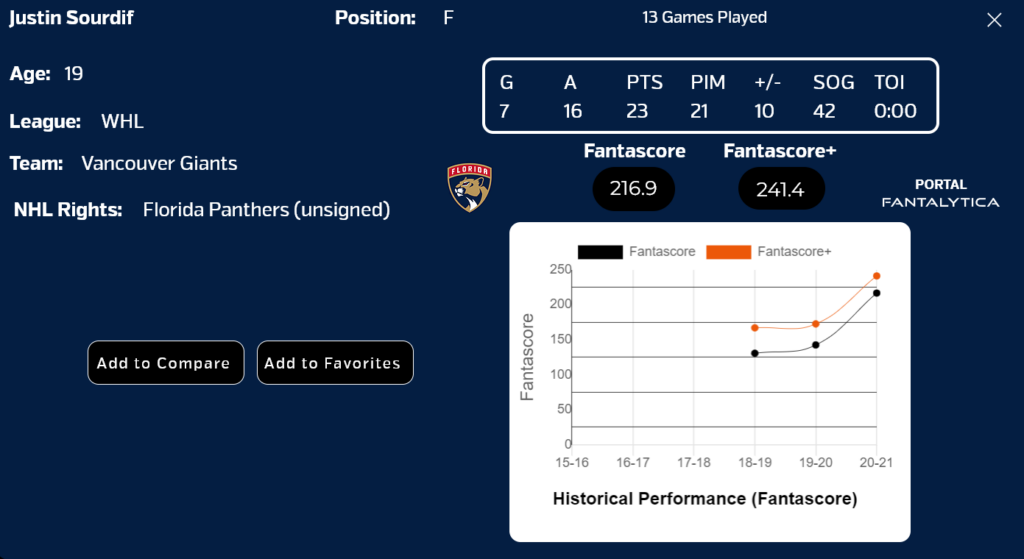 A 3rd round selection of the Florida Panthers in the 2020 NHL Draft, Sourdif is playing in the WHL, a league he is a bit too ripe to be in. Sourdif has an impressive stride and controls the game when the puck is on his stick. He makes players around him better, and after a mere 13 games has tallied 23 points, 16 of them being assists. Statistically, he was a 3rd round choice – we’re starting to think he fell a bit.

Sourdif plays a game that makes the opposition conform – a defenseman out of position has nearly zero chance to stop him. His game will translate to the AHL, and after a bit of time to get used to the rigors, could absolutely surprise fans and the front office with how well he can perform in the NHL. We’re genuinely excited to watch Sourdif develop. Especially with a name like that. 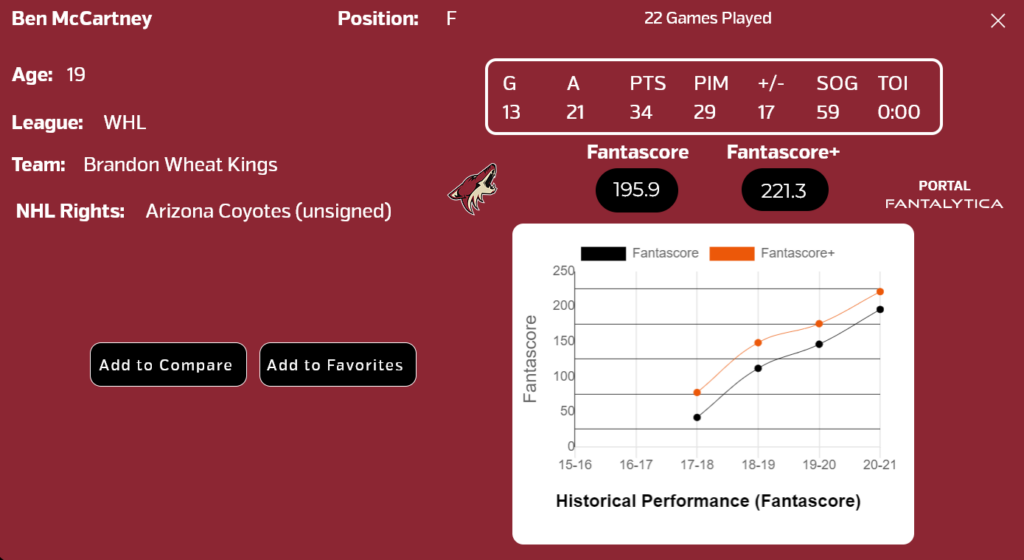 McCartney is a simple player. His bread and butter is comprised of one simple, yet effective action – up close and personal with the goalie. Nearly all of his points come from being below the goal line (assists), or in front of the net (blue paint). He’s reliable on the powerplay and can finish most pucks thrown his way in this area. It’s basically his office. Although he doesn’t bring any flash or pizazz to his game, he can be called on by the coach to do his job.

The NHL is slowly losing the volume of players that can produce in front of the net. Despite the reduction, being a net-front player can be an easy ticket to the NHL. McCartney could surely find a spot on an NHL PP2 playing in front of the net, wrestling defenders for scoring opportunities. Coaches still love that. Because of this, McCartney is a very deep choice for your team if you need a decent prospect to fill the bottom of your pipeline. 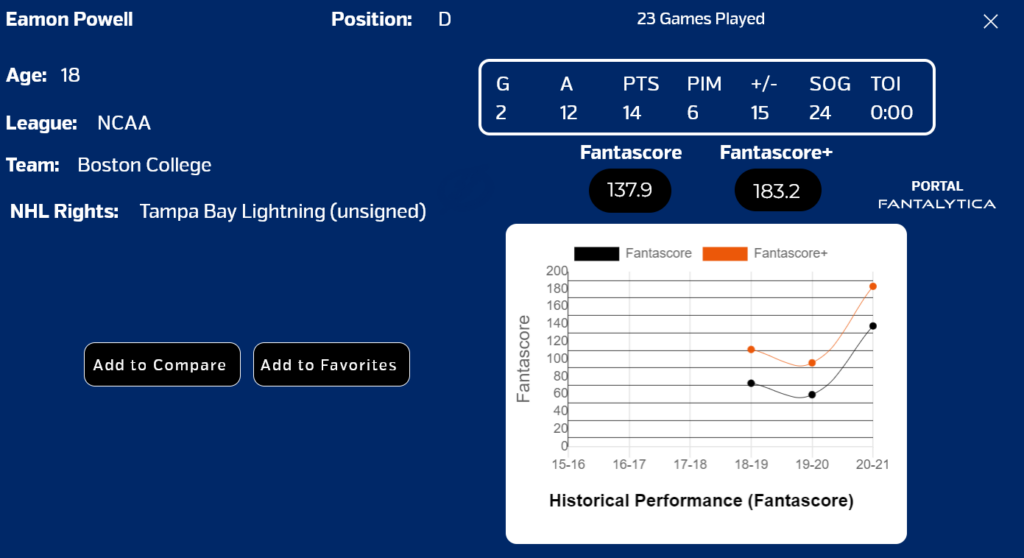 The sole defender on this week’s column, Eamon Powell is an interesting prospect to consider for your team. Taken in the 4th round by the Tampa Bay Lightning, Powell had a fabulous season playing with Boston College in the NCAA. In his draft year, he didn’t exactly wow fantasy owners with his statistical profile. 14 points in 43 games on the USDP. Fast forward a year, Powell just finished a respectable season stat line of 14 points in 24 games (as a freshman defender).

If your fantasy team lacks defensive depth, and you like an 18-year-old prospect playing in the NCAA, Powell is your guy. He has the kit, the IQ, and the vision to excel in the NCAA. It’s hard to figure out how he will fare in the AHL, but with at least 2 more years to develop in the AHL, Powell could turn into a real fantasy menace.