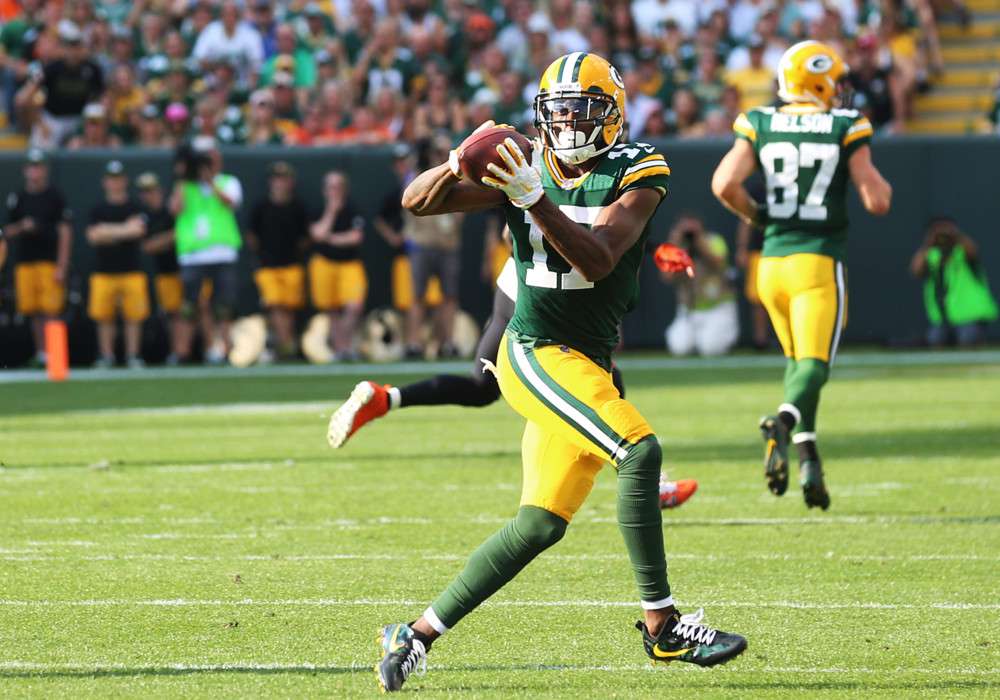 You could ask fans of each NFC North team who will make it to the playoffs and get four different answers. With each team’s free agency moves, everyone believes this is their year. Let’s look at the bombshell moves for each team that have changed the fantasy landscape of this division:

No other offseason storyline received as much attention as where Cousins would sign. After the Alex Smith trade dropped, speculation mounted as to who would pay for Cousins and the associated fallout. One game away from the Super Bowl in 2017, the Vikings now have the quarterback they believe will take them to the big game. Meanwhile, the Bears have seemingly overhauled their offense to give Mitch Trubisky more upside in his sophomore season. Green Bay is going through a surprise changing of the guard and analysts have mentioned Jermichael Finley’s name more in the past three weeks than in the past three years. The Lions have their work cut out for them with a loss at the tight end position, but their overall passing attack will keep them in contention.

Each NFC North team offers multiple early and mid round assets for fantasy owners. With free agency continually improving each team’s outlook, this final piece in the series looks at how the draft can set the tone for this division in 2018.

“With the second pick in the 2017 NFL draft, the Chicago Bears select…Mitchell Trubisky. Quarterback.”

With all the excitement around the Bears trading up to No. 2 overall to get Trubisky, you’d have hoped there was plan developed around his strengths. His rank of 28th in pass attempts shows not only did John Fox not know what to do with the rookie, but wanted to hide him. Jordan Howard’s carries increased and the Bears averaged 16.5 points per game leaving Trubisky’s rookie season with an abysmal 5-11 record.

And he’s not alone.

Trubisky had Fox. Goff had Jeff Fisher. See the trend here? Other than Jameis, each quarterback was tethered to a head coach stuck in the past. That’s no longer the case for Trubisky. Fantasy owners delighted in Nagy’s play calling as Alex Smith had a career year supporting multiple receivers and a star running back. Nobody’s expecting the same outcome for Trubisky in year two, but it’s clear the franchise wants to build around him. Trey Burton and Taylor Gabriel will serve as strong ancillary options, but Allen Robinson’s arrival is the rug that ties the room together. However, the team has unproven talent in the receiving group past these three. It’s critical Chicago continues to stock Trubisky with weapons to make a push on the season.

Robinson on the left. Burton off the line. Gabriel in the slot. A receiver opposite Robinson that can work both the outside and slot would keep defenses shifting priority attention. Memphis product Anthony Miller would easily fit the bill. Assumed to be more of a slot receiver because of his size, Miller showed above average success at intermediate routes and has the speed to be a vertical threat. His diminutive frame has correlated to a lack of separation, but Miller’s capable of winning contested catches. Trubisky’s not afraid of throwing into tight windows and could use another wide receiver that’s a threat in the open field. Not currently a hot name, so the Bears could possibly wait until the later rounds and get a value pick in 2018.

The Lions typify what a fantasy owner is looking for in an investment. Average defense that will keep the offense motivated. Quarterback that loves to sling the ball from the wildest platforms. A deep threat and a possession receiver. Detroit’s just missing a running game. By now, everyone’s heard the stat. The Lions haven’t had a 100-Yard Rusher since Reggie Bush ran for 117 yards on Thanksgiving Day 2013. While it hasn’t significantly impacted the passing game from a volume perspective, more rushing yards would put Detroit in more favorable down and distance situations. Theo Riddick has played the satellite role well, but the team needs a reliable banger in the backfield.

Also, speaking of Riddick, it’s far from certain he’ll be on the roster at the start of the 2018 season. Here’s his cap hit percentage compared with other running backs around the league:

We’ve seen the other running backs produce in both the running and passing game. Riddick hasn’t topped 400 rushing yards in a season at all during his career. With the Lions under $10M in cap space, it’s worth paying attention to his status post draft.

It’s a pretty serious indictment of a team’s confidence in a young talent if they bring in LeGarrette Blount. Blount’s skillset at 245 lbs is obvious. Ameer Abdullah is a capable receiver out of the backfield providing him a path to playing time in 2018. However, Blount’s 31 years old and on a one year deal. Detroit should look to draft a versatile running back to take over. This would essentially eliminate the need for Riddick and free up necessary cap space as the Lions head into training camp.

Derrius Guice has both the size and speed to be a three down back for Detroit. His vision to set up cut back lanes and move defenders with his quick hips will help keep him upright behind the Lion’s weak offensive line. The injury concerns might hamper his rookie season, but his potential as both a power runner and slasher whould elevate the entire offense. Assuming Blount leaves after 2018 and Abdullah resigned, a duo of Guice and Abdullah would set up nicely for Stafford. After losing an athletic tight end in Eric Ebron, Stafford needs more passing threats to stay upright. Guice would offer this in spades assuming the Lions also address their line in the draft.

The Packers’ 2017 season ended at exactly 6:56 of the first quarter in Week 6. Anthony Barr removed any hope the state of Wisconsin had for an enjoyable season after his brutal hit on Aaron Rodgers. Brett Hundley entered in relief of Rodgers and made sure the hope didn’t return. While Rodgers is back healthy for 2018 with Jimmy Graham to help, the team still has some issues to address.

Jordy Nelson’s release came as a shock to most of the football world. The Rodgers-Nelson mind meld has been a heavily discussed topic as the duo rapidly approached Hall of Fame status for their accolades. Their connection even grew in status when Jordy was out for 2015 and the offense struggled. But Father Time is undefeated. Early on it became clear that the dynamic duo didn’t have the same chemistry as in years past. His time with Hundley can be excused (somewhat), but Rodgers came back in Week 14 against Carolina. Nelson’s stat line? Three catches, 28 yards and zero touchdowns. Despite Rodgers’ and Nelson’s friendship, the front office couldn’t find a way to retain the vet. On the bright side, at least fantasy owners don’t have to worry about this anymore. 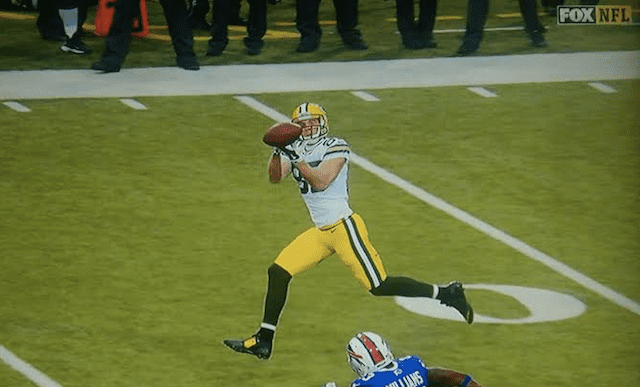 This leaves Davante Adams and Randall Cobb to lead the receiver group in 2018. Adams has become the number one receiver with Cobb working out of the slot or backfield. Geronimo Allison has shown flashes, but he’s entering his third year with the team without a solid role. Green Bay needs another outside receiver to take the starting position opposite Adams.

The defense requires most of their attention and warrants a multiple draft picks to shore up their unit. However, if a talent like James Washington’s is available in the second round, the Packers should consider his impact to the team. Despite his 5’11” size, Washington impressed as a vertical receiver at Oklahoma St. almost instantly turning heads. He’s worked primarily from right side of the field, but his talent is conducive to multiple roles within the offense. His ability to create separation on both vertical and intermediate routes would work well with Rodgers’ deep ball accuracy. It would also clear out the middle of the field for both Cobb and Graham keeping all options on the table for Rodgers. 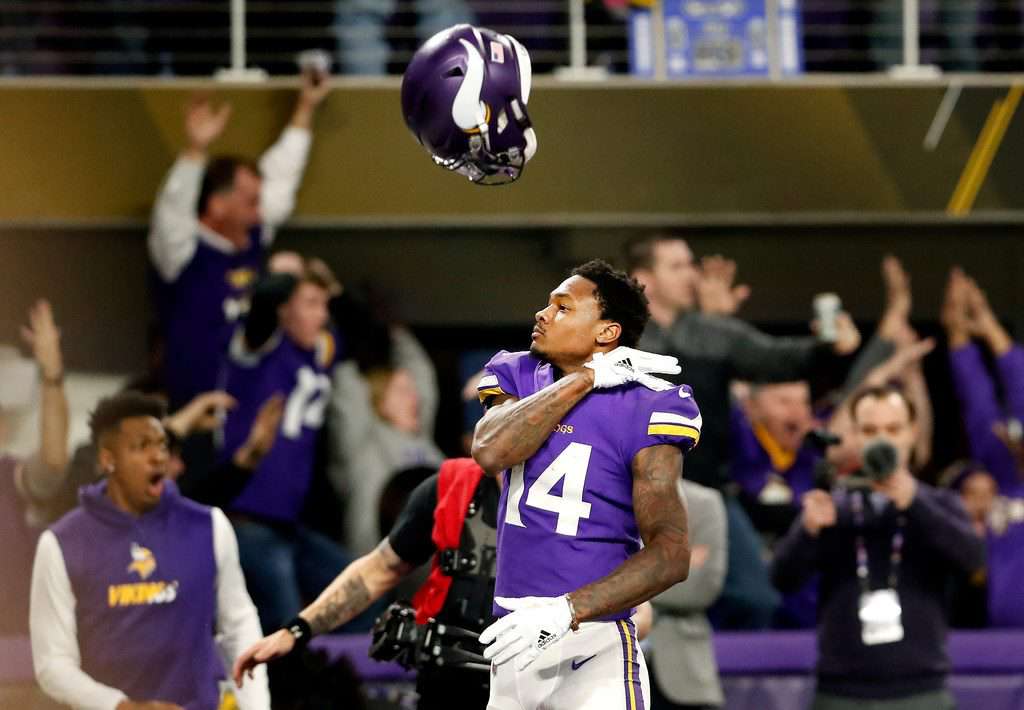 Imagine starting the season with one quarterback, having to turn to your backup, activating the guy you drafted to be your franchise QB from IR to be the backup, and STILL being able to accomplish something like this. You can’t. Their defensive strength always kept the Vikings in the discussion, but when the Saints came to town no one saw this coming. A play that capped an impressive season from Case Keenum and facilitating his move to Denver. The play that returned hope to Minnesota and folks began to dream of a time where the team had a more capable quarterback.

That time is now. Kirk Cousins under center immediately puts the Vikings’ offense near the top of offensive rankings for the conference. The core players are all being selected in the single digits rounds of best ball drafts which is unique as drafters typically look for late round value in quarterbacks. But when you throw to receivers that can perform miracles, owners will come for you.

Cousins hasn’t had an issue supporting multiple pass catchers as Jay Gruden’s West Coast offense schemes multiple receivers open depending on the play. John DeFilippo uses similar concepts in his planning as seen in the Eagles passing attack in 2017. This could cap the ceilings of the Vikings receivers, but solidify their floor. It also opens up the possibility of adding another pass catcher to the team.

This will be Laquon Treadwell’s third season with no indication the star prospect has improved. With the amount of money the Vikings spent to acquire Cousins, anything short of a repeat performance will be seen as a disaster. The team needs an impact receiver that can be play outside allowing Diggs and Thielen to maximize their strengths moving around the formation. Minnesota drafts late in each round and has needs on the defensive side of the ball. However, Penn State’s DaeSean Hamilton should be available in the mid rounds and presents himself as a value pick in the 2018 draft.

Hamilton’s size and college usage point to an early career in the slot. However, his technique as a route runner resulted in above average success rates in both intermediate and vertical routes. This proves he has both the skills and athleticism to work past linebackers and safeties keeping the defense in check. His struggles with press corners would force Diggs and Thielen to the outside in 3 WR sets, but Hamilton’s route running could maintain multiple options for Cousins in any situation.