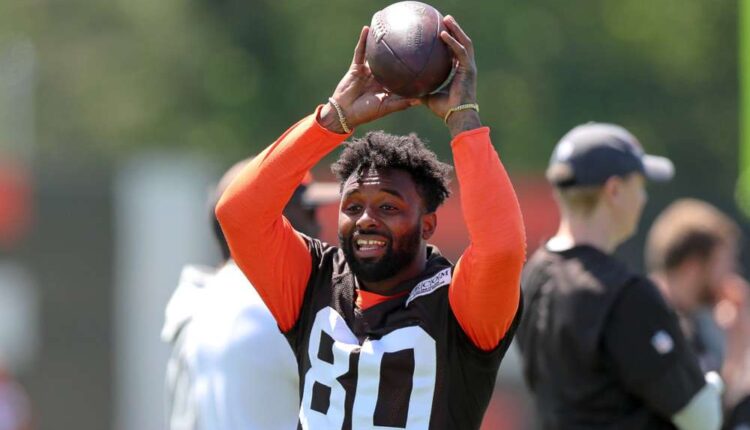 It is June and OTA’s are here. Twitter is starting to flood with video of sick  catches from your favorite Fantasy wideout making you think “hey, this could be his year.” There are a lot of new faces on different squads which usually brings excitement around high-profile players. Jarvis Landry, for some reason, is not one of those players with a lot of hype around him in the Fantasy community. Sometimes, there are certain players that do not get the love they deserve and Landry is one of them. Frank Gore has been at least an RB2 since before the iPhone was released, but people don’t care, they want upside.

ADPS are rising and falling around the league and by the time most Fantasy redraft leagues come around in August, there will be players that are going to fall through the cracks of even the savviest of drafters. Rising ADP for a particular player does not necessarily mean that guy is a must-draft player, and in most cases, it could mean that his relative value has actually decreased.

Let’s take a look at whose ADP is rising and whose is falling in this week’s Fantasy Stock Watch. All ADP’s are based on PPR scoring per Fantasyfootballcalculator.

Jarvis Landry is being taken as the 25th wide receiver off the board in PPR drafts according to FantasyFootballCalculator.com. He is the 20th on Fantasypros.com.

What is happening? Is this one of those things where drafters are trying to overthink things? ” Jarvis Landry is a Brown and there a lot of mouths to feed in Cleveland” I imagine is the narrative supporting this savage ADP that Landry has been snubbed with.

As a Dolphin last season, Landry was peppered with 161 targets as he was Mr. Necessary for the Jay Cutler led offense. He caught 112 of those passes and had a career-high nine touchdowns.  It is that huge touchdown number that is also scaring people away from Landry this season in Fantasy football. Regression is coming.

One thing that those people are forgetting is that this Brown’s team is going to pass the ball a lot. Whether it is Tyrod Taylor or Baker Mayfield, the Browns have an offensive unit that is going to be Fantasy friendly. Taylor looks to be the starter at the beginning of the year and he is known to have the tendency to dink and dunk underneath. He is highly mobile in and out of the pocket and extends plays allowing his receivers to get space from the defense. He does throw the ball deep when he has a threat on the sidelines, but he is a low-risk type of player that prefers making the safer play.

Josh Gordon will act as this team’s deep-threat, but will not be a high-volume receiver; especially not with Jarvis Landry on the field. Taylor is the perfect quarterback for Landry, who is best in the slot and with the ball in his hands underneath. Jarvis Landry has the third largest contract in the NFL at the wide receiver position (worth a potential $75M), so why would they not use him as such?

There will be touchdown regression for Landry, but he can still end up with five or six for the season. Landry finished as the WR4 last year in PPR with only 987 yards. He was the WR11 and the WR13 in 2015 and 2016 and both of those seasons he was well over 1,000 yards. He has always been a high-possession receiver and that is not changing. His value could go down if Mayfield does take over, but more mistakes and big-plays could give Landry just as much opportunity in Fantasy. Think of Landry as a locked-in WR2 next season with WR1 upside. He is still a 100-catch candidate as 140-150 targets (still less than years past) is possible.

Bryant’s ADP is tricky for obvious reasons. He is not on an NFL team, which makes it even more difficult for him to score fantasy points next season. However, it would be a mistake to forget about Dez Bryant. In a season where Fantasy gamers chastised the former Pro-Bowler, he still managed to catch 69 passes for 839 yards and six touchdowns. Sure, he was drafted in the second round and did not return value, so it was a busted season from that perspective. Recency bias is real and weighs heavily when it comes down to drafting one player or the other. Do not let a grudge get in the way of making an informed decision come draft day.

Bryant was the 24th ranked wide receiver last season. He was only able to haul in 69 of 132 targets from Dak Prescott in a year where Ezekial Elliott missed six games. Bryant was the clear number one receiver and the Cowboys had no other threat for opposing defenses, which brings up an excellent point. A popular take last year was the plethora of shutdown cornerbacks Bryant was going to face could limit his upside. Yup. That’s exactly what happened, but he still finished with respectable numbers. Alshon Jeffery dealt with a similar schedule and finished as the 23rd ranked receiver and he only had 57 catches but ended up with nine touchdowns. Jeffery is not looked at with the same level of scrutiny in the Fantasy community.

Former #Cowboys WR Dez Bryant is expected to remain free until the start of training camp, sources say, barring a big injury at his position. He has received plenty of interest, but he's being patient and selective. pic.twitter.com/HMCbGBMD4i

Bryant was fifth in the NFL with six drops last season (one behind Julio Jones who had seven). Those are on him. However, if you consider that maybe some of the 57 other targets that Prescott threw to Bryant were uncatchable, then maybe Bryant could have actually had a better output in 2017. Bryant was elite with Tony Romo, a quarterback who could make all of the throws, including the back-shoulder which was deadly in the red zone. If he ends up on a team with a quarterback he can mesh with, especially in the red zone where Bryant had made his money, there is no reason he can’t have WR2 upside. It was reported recently that Bryant has drawn the interest of several NFL teams, but the eight-year vet is being selective with his decision. Once he does sign with a team he will have an exponential rising ADP this Summer, but it is sure to be capped by the negative perception Fantasy players have formulated. Get Bryant at a value this season as he still has quality football left, regardless of where he lands.

Of all of the rookie wide receivers that look to have Fantasy relevance next season, Ridley has been drafted the highest. Prior to the NFL Draft, Ridley was on many Fantasy rankings as the number one rookie wideout in 2018. This was in line with the perception that Ridley had the best chance to be drafted that way by NFL teams. D.J. Moore was selected two spots ahead of Ridley (24th and 26th overall respectively) by the Carolina Panthers. Now, with the Falcons, Ridley has a great opportunity to be successful in Fantasy football – but is he going to produce the most points of the 2018 wide receiver class? Not so fast.

Along with D.J Moore, there are a handful of first-year receivers that will have impactful roles on their squad immediately. Christian Kirk, Anthony Miller, and Michael Gallup all have the potential to be the second option at wideout for their respective teams. James Washington can fill the deep-threat role for the Steelers that Martavis Bryant held for three seasons, and J’mon Moore will be competing for playing time in three-receiver packages for Aaron Rodgers and the Packers.

Ridley will be a big part of the Falcons offense in 2018, but he could be the third receiver in an offense where Julio Jones is force-fed targets. Mohamed Sanu got 96 targets last season and he will not be willing to hand over playing time to a rookie.

The prospect out of Alabama can play undoubtedly. He was at the top of some NFL General Manager’s draft boards for a reason. He is a crisp route runner -arguably the best in this class but he is only 189 pounds, which could limit his durability and how the Falcons use him. Ridley has an opportunity to make some big plays this year, but his rising ADP makes his price a little too close to his ceiling next season. That being said, he is a great pick at the 1.02 in Dynasty rookie drafts but the names above (and others) could have a comparable impact this season in Fantasy. Draft with caution as Ridleys rising ADP compromises his value in 2018.

Breaking Down the Second Tier: Is Luis Severino the 5th Beatle?