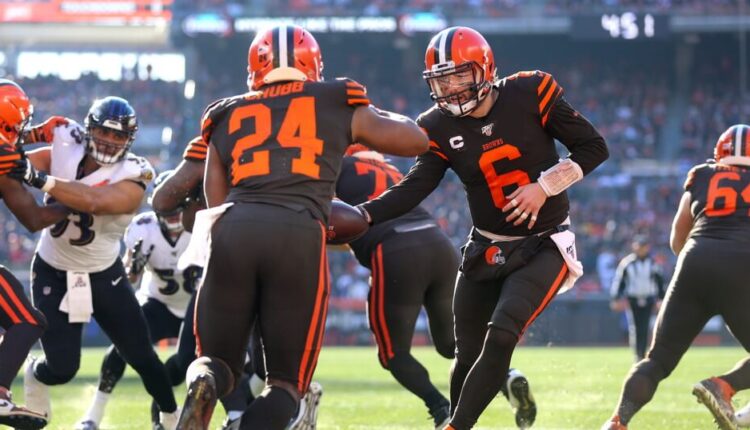 The start of free agency has been fast and furious with a number of big trades that caught nearly everyone off guard. A lot of dynasty values are in flux right now, which creates opportunities to make dynasty trades. There have been a multitude of tweets and articles detailing how great the acquisition of DeAndre Hopkins is for Kyler Murray and the benefits for Hayden Hurst‘s fantasy potential in moving from a backup role in Baltimore to a starting spot in Atlanta.

These big dynasty value changes for Murray, Hurst, and others were instantaneous and widely acknowledged. While it’s still possible to acquire these assets with increased dynasty values, there isn’t as much opportunity to buy at a discount. Instead, this article will focus on and delve into the lesser cascade effects of some of these big NFL moves and how they’ve created some buy-low opportunities in dynasty trades. Here are two quarterbacks that can currently be acquired at a discount in dynasty.

New general manager Andrew Berry has also already made some sensible additions in free agency. Rather than trading away a starting guard like John Dorsey did with Kevin Zeitler last offseason, Berry has instead anchored the right side of the offensive line by signing Jack Conklin, their new right tackle. Expect Cleveland to add another offensive lineman as well through the draft, as they currently own seven picks, including four in the top-100. These additions should help bolster the line and protect Baker Mayfield. While Mayfield was partially to blame as well for last year’s offensive implosion, additions to an offensive line that ranked 23rd in the league should help alleviate the pressure on Mayfield, literally.

The current Browns regime also seems dedicated to surrounding Mayfield with offensive talent. Though their two top wide receivers both underwent surgery this offseason, there is currently no concern of them missing any regular-season games. Odell Beckham Jr. was hampered all last year with a groin injury, but he is expected to be fully healthy by training camp despite undergoing a core muscle repair surgery in January. Likewise, Jarvis Landry is also not expected to miss any games after undergoing hip surgery in February. Nick Chubb should flourish in an already efficient run game boosted even more by Stefanski’s tutelage and the acquisition of fullback Andy Janovich via trade, and the Browns are likely to retain Kareem Hunt as well after placing a second-round tender on him.

But Cleveland’s biggest move thus far in free agency has been signing Austin Hooper to a four-year, $42 million contract. Stefanski was efficient in utilizing two-tight end schemes in Minnesota, and Hooper’s presence adds another reliable pass catcher for Mayfield over the middle in addition to their excellent wide receiver corps and David Njoku. In fact, the Browns’ receivers had the fifth-worst drop rate last year, whereas Hooper boasted the seventh-highest catch rate in the league in 2019.

Just as important, Hooper has caught 59 percent of his contested targets over the last two years, ranking second-best among tight ends. His presence should aid Mayfield’s red zone efficiency as well, as Mayfield ranked 35th in red zone completion percentage inside the 20-yard line (40.5%) and 34th inside the 10-yard line (38.5%) among quarterbacks with over 25 red zone passing attempts.

All this talent at the offensive skill positions and the improvements to the offensive line intersect at Mayfield. Though the burden is still ultimately on his shoulders to execute, his task should be significantly easier in 2020 compared to last season. Mayfield’s average draft position (ADP) in dynasty startups since entering the league has been volatile, as the below graph illustrates, courtesy of Dynasty League Football.

Mayfield’s ADP peaked last May, being drafted in startups on average as the no. 2 dynasty quarterback behind only Patrick Mahomes with the dynasty community enamored with Cleveland’s acquisition of Beckham. After a poor performance last season, Mayfield’s positional ADP has since dropped, now being selected in startup drafts on average as the no. 9 dynasty quarterback as of March. A recent Twitter poll suggests that Mayfield is an apparent value right now, particularly in superflex formats. 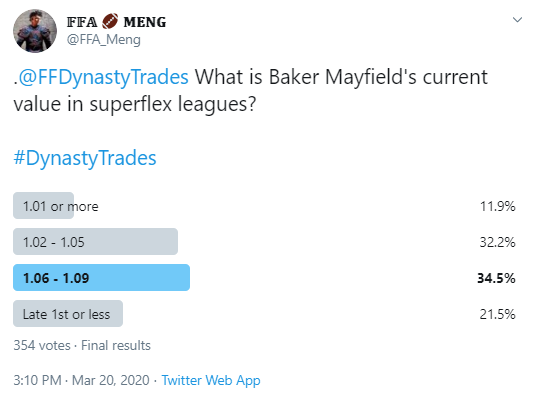 More than half of the poll’s respondents valued Mayfield at the 1.06 rookie pick or less, with an astounding 21.5 percent valuing him at the 1.10 rookie pick or less. While there is reasonable cause for concern after his sophomore slump, Mayfield is due for a rebound in 2020 given the coaching and organizational changes in Cleveland as well as the upgrades to his offensive line and receiving corps. The only rookies I’d consider drafting over Mayfield in superflex formats as of right now would be Joe Burrow, Tua Tagovailoa, and Jonathan Taylor. And for contending teams without any clear needs, I’d potentially value Mayfield over even the 1.01 rookie pick.

Investing in a soon-to-be 38-year-old quarterback is certainly a risky move, but Ben Roethlisberger could be an ideal one-year rental for contending dynasty teams or a cheap asset to flip for profit mid-season. The Steelers’ offense was an abject disaster following Roethlisberger’s elbow injury early in the 2019 season. Neither Mason Rudolph nor Devlin Hodges showed any semblance of competency, solidifying Roethlisberger as the incumbent for the starting job in Pittsburgh once healthy in 2020.

Though two-thirds of the “Killer B’s” have moved on, even without Antonio Brown and Le’Veon Bell , Roethlisberger will be returning to a Steelers offense that’s full of supporting talent. Second-year wide receiver James Washington developed into a veritable deep threat this season with 12.5 yards before the catch per reception, ranking seventh in the league. Rookie Diontae Johnson finished the year with 18 broken tackles on just 59 receptions, which was good enough to tie for the league lead. And while various injuries derailed JuJu Smith-Schuster‘s 2019 season after a spectacular 2018 campaign, a healthy Smith-Schuster should rebound in 2020 and will have extra motivation to do so provided that it will be a contract year for him.

Now with the addition of Eric Ebron, who the Steelers recently signed to a two-year, $12 million deal, Roethlisberger adds another receiving weapon to his arsenal, particularly in the red zone. Although the aforementioned Pittsburgh wide receivers are all talented in their own right, none are viable targets for jump balls and fades in the end zone. Standing at 6’4, Ebron is an ideal target close to the goal line over the 6’1 Smith-Schuster as well as over Washington and Johnson, both of whom measure in at 5’11.

In fact, Ebron led all tight ends with 13 touchdowns in 2018 with Andrew Luck under center. Luck’s unexpected retirement hindered Ebron’s 2019 production, as Ebron never really established a connection with either Jacoby Brissett or Brian Hoyer. An ankle injury in Week 11 last year also hurt his production, resulting in Ebron going on injured reserve and missing the final five games of the season. Ebron’s fantasy production will still be somewhat touchdown-dependent, as he is expected to split snaps with Vance McDonald, who the Steelers retained by restructuring his contract. But while Ebron’s likely to be an inconsistent fantasy option week to week, his incorporation into the Steelers offense could greatly benefit Roethlisberger’s scoring rate.

Perhaps most importantly for Roethlisberger, Pittsburgh’s offensive line has remained mostly intact, ranking third in pass blocking and ninth overall last season. With stout pass protection and a bevy of talented receivers, Roethlisberger is positioned well for 2020. Though he may only have a year or two left before retirement, Roethlisberger has top-10 fantasy quarterback potential next season. He is a dynasty bargain right now, especially in superflex formats, as the below Twitter poll results show. 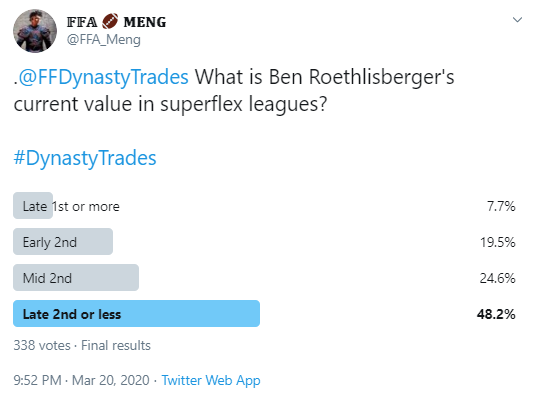