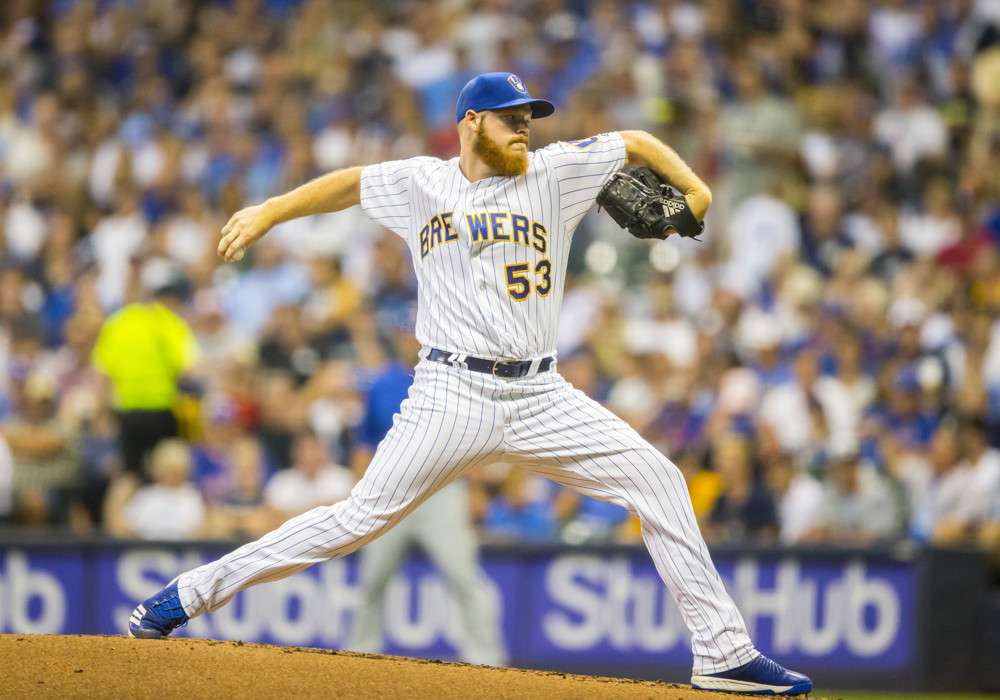 If you’re not paying attention to player trends throughout the season, you’re gonna get left behind in a hurry. This week we have a player who has been left behind by his team already in Jose Peraza, and another in Brandon Woodruff, who is working to establish permanence. In most leagues, dropping this week’s Ice for the Fire is a no-brainer, which is not what we would have expected on draft day.

In last weeks Fire & Ice, I teased writing up Brandon Woodruff. Since then, he has only piqued my interest more. He tossed six innings against Washington last week, giving up one run on four hits with nine strikeouts and no walks. His ERA is a mediocre 4.25 over his first eight starts, but his 2.84 FIP hints at a brighter future. What can we expect from him the rest of the season?

The first thing that jumps out at you is the massive 11.48 K/9. What he has been able to do with his strikeout rate since his debut season in 2017 is very impressive. 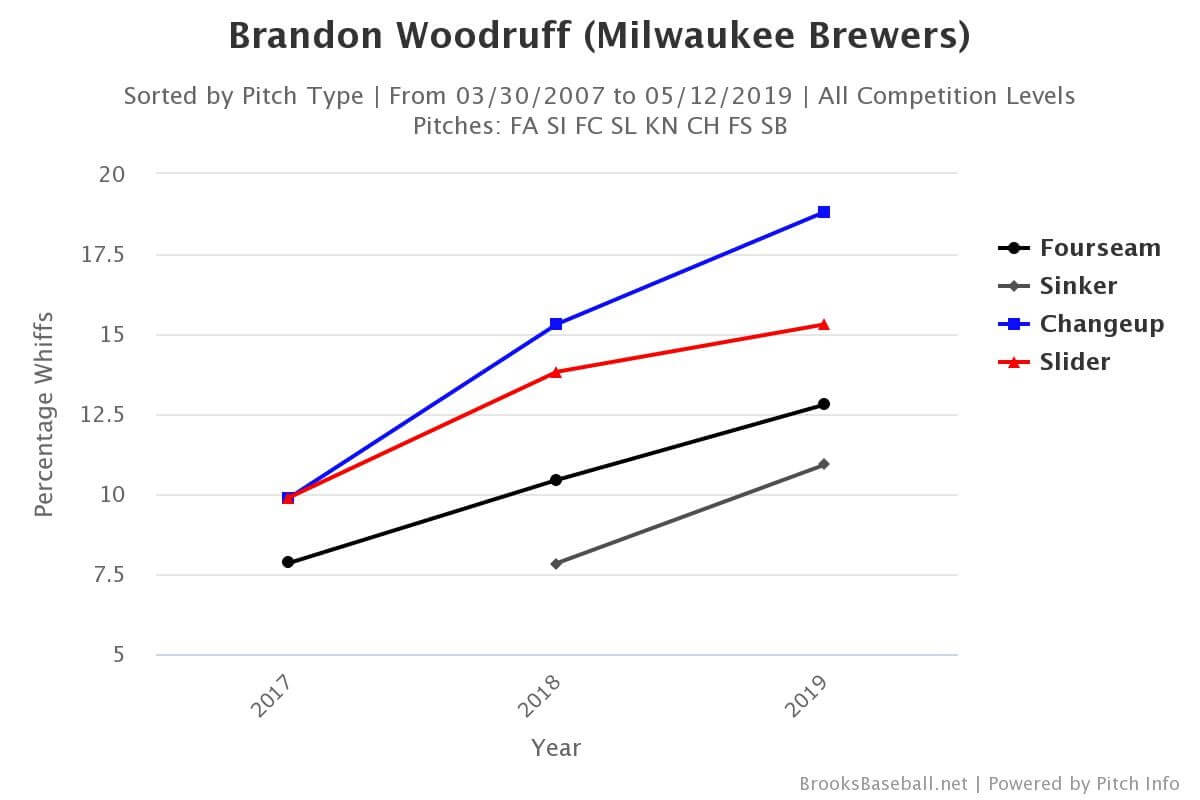 That 11.48 K/9 ranks seventh in baseball among qualified starters. It puts him behind only Cole, Carrasco, DeGrom, Strasburg, Scherzer, and last week’s flame Caleb Smith. Whereas each of those other starters all land within the top eight overall in swinging strike rate at 14.3% or better, Woodruff sits with just an 11.7% SwStr%. That ranks him 32nd on the swinging strike rate leaderboard. That puts him in with more modest strikeout company, such as Michael Pineda (7.88 K/9) and Joe Musgrove (7.75 K/9). His CSW rate sits at an even 30%, which is good, but called strikes are less fortuitous than the swinging variety.

There has also been a tweak to his pitch mix. Late last year he began throwing a sinker. This season he’s throwing it 14.44%, using it low in the zone to complement his four-seam, which he keeps high.

His sinker is generating 57% ground balls, but it has also been clobbered. The .467 BABIP against it should regress. However, its xwOBA is still .382 compared to its current .460 wOBA. The BABIP on his four-seam is even worse at .500. On the surface that might scream regression, but it’s allowing 38% line drives, so a lot of that BABIP is deserved. The changeup (18.8% SwStr%) and slider (15.3% SwStr%) have done most of the heavy lifting for him.

The changeup is mostly used against left-handed bats. Although it gets plenty of whiffs, it hasn’t helped him avoid a nasty .382 wOBA against lefties. He’s good enough against righties to largely make up for those deficiencies and be a solid starting pitcher. He won’t be able to reach that next level of stardom until he figures out how to eliminate that lefty split, though. Expect some strikeout regression, but also expect Brandon Woodruff to be a mixed league relevant starter all season.

The Reds came into 2019 as one of the most interesting teams in baseball. On top of a revamped rotation, the likes of Yasiel Puig and Jesse Winker were set to be real difference makers in the lineup. Coming off of a 14/23/.288 season, Jose Peraza was a popular middle infielder during draft season. Unfortunately for those who invested, Peraza is hitting just .197/.248/.274 after 125 plate appearances. That .233 wOBA ranks third-worst in baseball.

Peraza is one of the most walk-averse players in the league. When hitters like that hit a cold streak as Peraza has to open the season, they simply aren’t on the bases. With a speed-driven profile, Peraza hasn’t been able to steal much with a .248 OBP, stealing four bags in six attempts. He has also been hitting mostly in the bottom half of the order, which makes sense given the Reds other OBP studs such as Votto, Winker, and Puig.

There is, quite frankly, some seriously weird stuff going on in Peraza’s batted ball profile. 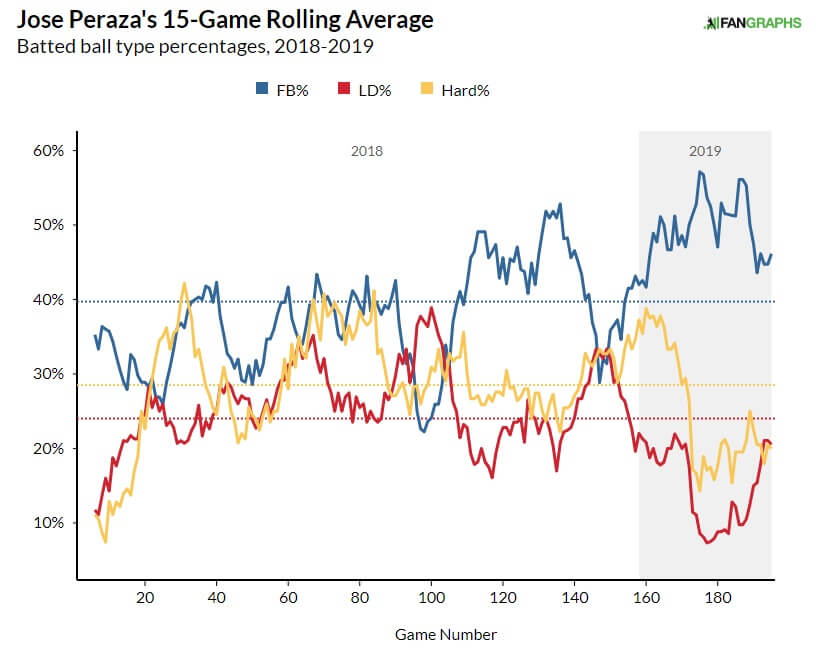 Over the second half of 2018, Jose Peraza pushed his fly ball rate up to 42.4%. His 29.8% hard contact rate was well below average, but he was still able to hit nine bombs and 16 doubles over those 264 at-bats. This year he has pushed his fly ball rate all the way up to 50%, which ties him with Matt Carpenter for the seventh highest FB% in baseball. That’s a peculiar approach for a slap hitter such as Peraza, and it’s killing him.

Peraza’s hard contact rate is just 22.6% this year, second-worst in baseball (Victor Robles is dead last at 21.4%). That’s a ton of meekly hit fly balls, known to the casual fan as the ol’ can of corn. He is also hitting 13% pop-ups, which isn’t among the worst in the league, but it doesn’t do him any favors. Between the easy outs and the auto-outs, there’s little wonder why he’s sporting a .231 BABIP. It’s also why his .249 xwOBA isn’t much higher than his .234 wOBA. He has just one barrel in his 93 batted ball events.

His strikeout rate has also jumped from 11% to 19.2%. There is little change in his plate discipline to indicate that will continue, however. The biggest difference is a dropoff in his O-Contact% from 76.1% to 68.6%, mostly meaning fewer fouled balls in exchange for strikeouts. The biggest issue is that Peraza needs to get back to hitting the ball on the ground to get his BABIP back up. He isn’t a power hitter, although he seems to be trying to turn into one.

If he can’t get back to his slap-and-dash ways, he’s going to turn into a permanent bench bat. The Reds have a crowded infield as it is, and they’ve pushed him to the outfield a few times already. With so many solid middle infield options this year, Peraza is very replaceable in standard mixed leagues. Deep leaguers should have Peraza on the bench already, with a tenuous place on your roster. There are no signs of him turning this around yet.