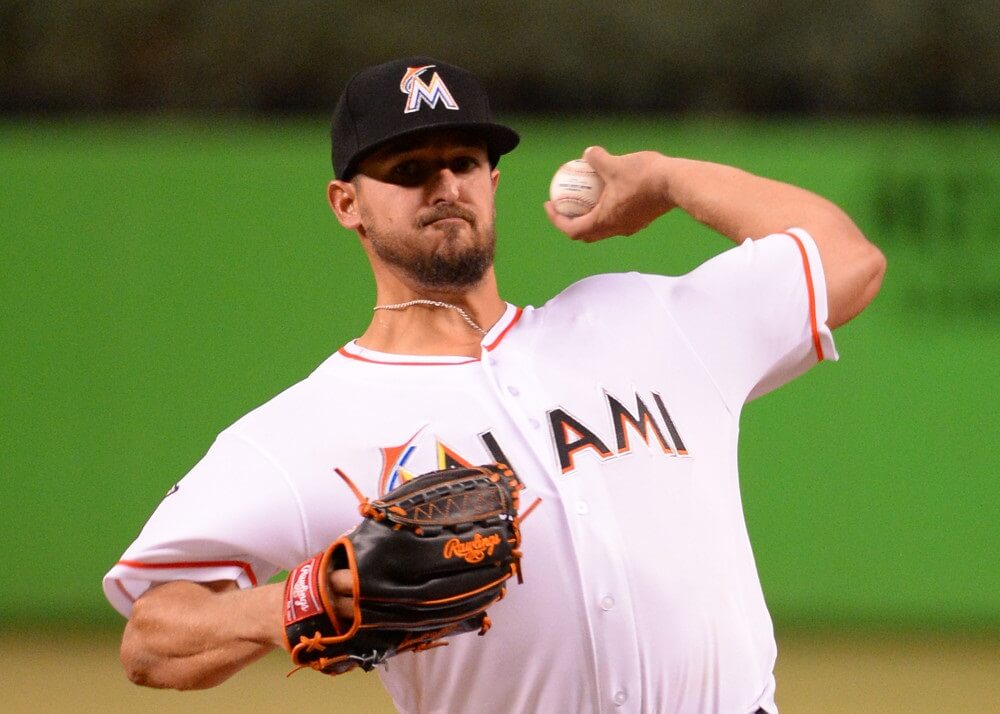 This week we have a pitcher and a hitter that are the early epitome of Fire & Ice. This is why it behooves us early on to take a stab at hot starts and also not wait too long to cut bait on a bad investment. Remain vigilant, fantasy enthusiast, as we analyze the early returns from Caleb Smith and Brian Dozier!

You’re not going to find anyone to defend the Marlins on the trade they made which sent Giancarlo Stanton to the Yankees. Marlins fans (if there truly are any out there) lost sleep that night. As beneficial as that deal was for the Yanks, it turns out they aren’t infallible. The Marlins saw something in a young left-hander named Caleb Smith, acquiring him and Garrett Cooper for Michael King and international bonus pool money. That deal appears to have been won by Miami.

Smith burst onto the scene in 2018 with a solid 4.19 ERA and 10.24 K/9 over 77.1 innings. His season was stunted by a severe lat strain at that point, unfortunately. He was brought along slowly this spring to make sure he was healthy enough to start. His velocity was good, and his stamina was sufficient enough to land him a spot in the Opening Day rotation. Six starts later Smith is 3-0 with a 2.00 ERA.

If you glance at the current strikeout leaderboard, the top 10 yields a few surprises. I’m talking about Matt Boyd (who I wrote about a few weeks back here), Brandon Woodruff (who I almost wrote about…maybe next week) and Caleb Smith. 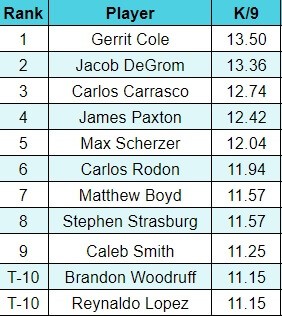 Smith has been a strikeout machine, missing bats with a league-leading 16.8% swinging strike rate. This brings us to something I mentioned in my Starting Pitcher Dudes article regarding Smiths swing-and-miss ability portending tremendous results:

“His stuff was so good that his zone contact rate (which encapsulates the ability to miss bats within the strike zone) was 10th best in baseball (min. 70 IP). The nine starters above him? How about Sale, Scherzer, Verlander, DeGrom, Cole, Snell, Castillo, Flaherty, and Nola. Not bad company to keep.”

So far in 2019, he leads all of baseball with a 75.0 Z-Contact%. That’s a whopping 7.0% improvement from his already stellar 2018 mark. His stuff has taken a step forward across the board. The spin rate on his fastball has risen from 2365 RPM to 2404, and he’s doing a better job of elevating it in the strike zone to get whiffs and pop-ups.

His whiff rate on the four-seam has risen from 11.8% in 2018 to 15% while its xwOBA has dipped from .370 to .317. He’s doing an effective job of switching eye levels with four-seamers high in the zone and changeups and sliders low.

Speaking of the changeup, it has taken a huge step forward in 2019. It is now netting 24.8% whiffs after posting a 17.4% mark last year. After posting a -0.2 pitch value on the changeup last year, through those first six starts, he’s already at a 2.7 pVAL. That ranks the pitch 7th in MLB. We haven’t even touched on the slider, which is netting 18.8% whiffs in its own right. All three of Smith’s pitches rank inside the top 16 on the pVAL leaderboards. That is one hell of a foundation.

Smith didn’t have a ton of walk issues in the minors, with a career 3.2 BB/9. He struggled to find the zone last year, however, with a 3.84 BB/9. This spring training it seemed as though his control had taken a step forward, and his current 2.25 BB/9 confirms as much. His zone rate and first-pitch strike rate is unchanged from last year, but his command has allowed him to increase his O-Swing% from 30.4% to 37.7%, which is currently best in MLB. Exchanging a few ball-fours for bad swings makes a big difference.

There is some downside here. His .224 BABIP is unsustainable, although it is aided by a 12.9% pop-up rate. His 90.2% strand rate is incredibly elevated, although Blake Snell got away with an 88% strand rate for the entirety of 2018. The walk rate is likely to rise, and the ERA will follow. To what extent? Well, among his FIP, xFIP, and SIERA, his highest regression mark comes from SIERA at 3.05. Even if he pitches more like a 3.25-3.50 ERA starter the rest of the way, his immense strikeout rate will make sure he’s plenty valuable. There isn’t much here to say that Caleb Smith can’t pitch like an SP2/3 while he’s on the mound, but there will probably be an innings limit imposed upon him at some point around the 150 inning mark.

A lot has been made about a knee injury that Brian Dozier suffered in 2018. The knee took the blame for his career-worst .304 wOBA. He hit just 21 homers, his lowest total since his first full season in 2013 when he hit 18. He also posted the lowest average of his career at .215. Things were so bad after being moved to the Dodgers that he scarcely played down the stretch. So, the prevailing theory was that with a healthy knee in a great Nationals lineup, Dozier would populate Bounce Back City. That…has not happened.

One hundred eighteen trips to the dish into the 2019 season and Dozier is batting just .186/.297/.343. He has managed to yank five balls over the fence but has just one other extra-base hit all season. He is just 1-2 in stolen base attempts since, you know, it’s hard to steal second base when you can’t get to first. Is this a great buy-low opportunity or is the nearly-32-year-old second basemen at the twilight of his career?

Dozier’s success hasn’t come thanks to huge raw power and massive hard contact rate. Target Field was a terrific park for him to pull a ton of fly balls for homers. Just look at his career spray chart. 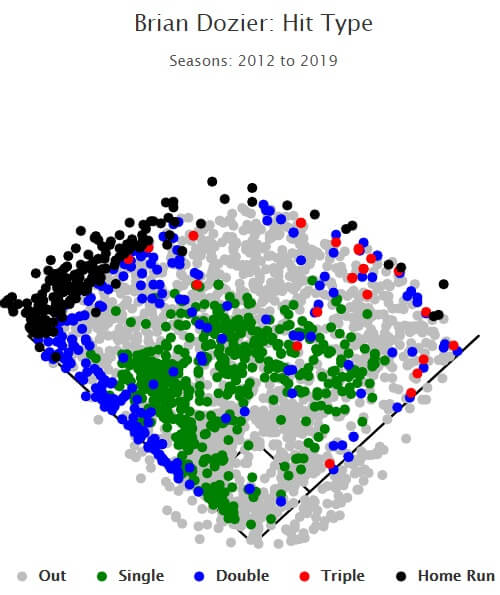 In addition to his poor batted ball profile, Brian Dozier’s strikeout rate has shot up 6.7% to 27.1%. The one saving grace for Dozier was that he was a decent contact hitter, able to limit his strikeouts while hitting for power. That no longer seems to be the case. 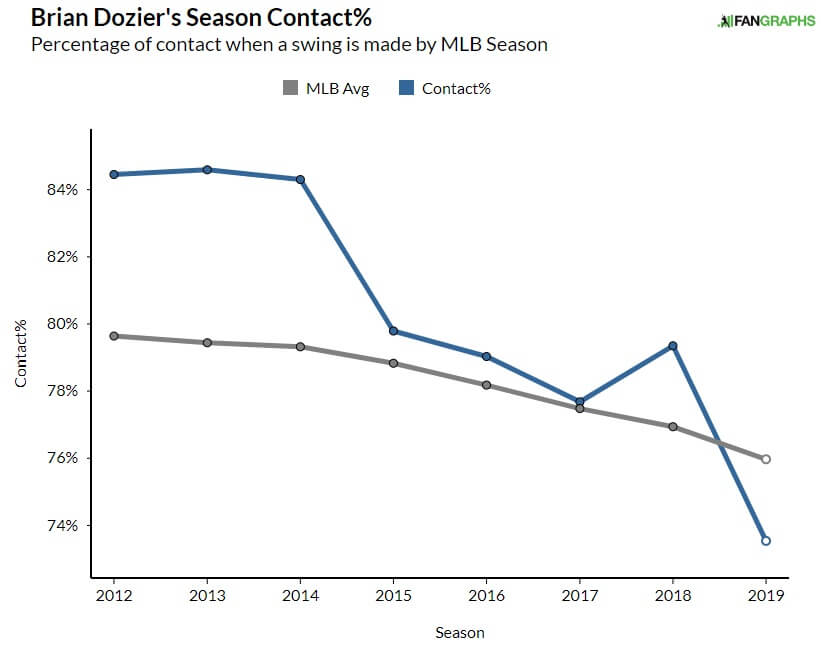 Dozier’s contact rate is at an all-time low 73.5%, down 6.2% just from last year. His contact rate on pitches in the strike zone is down as well, from 85.7% to 82.8%. This can indicate a loss of bat speed, which certainly isn’t great for an aging middle infielder. His xWOBA of .309 is scarcely higher than his actual .298 wOBA, further indication that no rebound is in sight.

If you’re in a standard mixed league, you can do better as your second baseman or middle infielder. He’s easier to stomach in OBP leagues since he’s still walking at a healthy clip. That said, he’s hitting in the bottom half of the lineup most days and providing almost nothing but the occasional home run. Don’t wait around for the rebound that doesn’t seem to be coming.