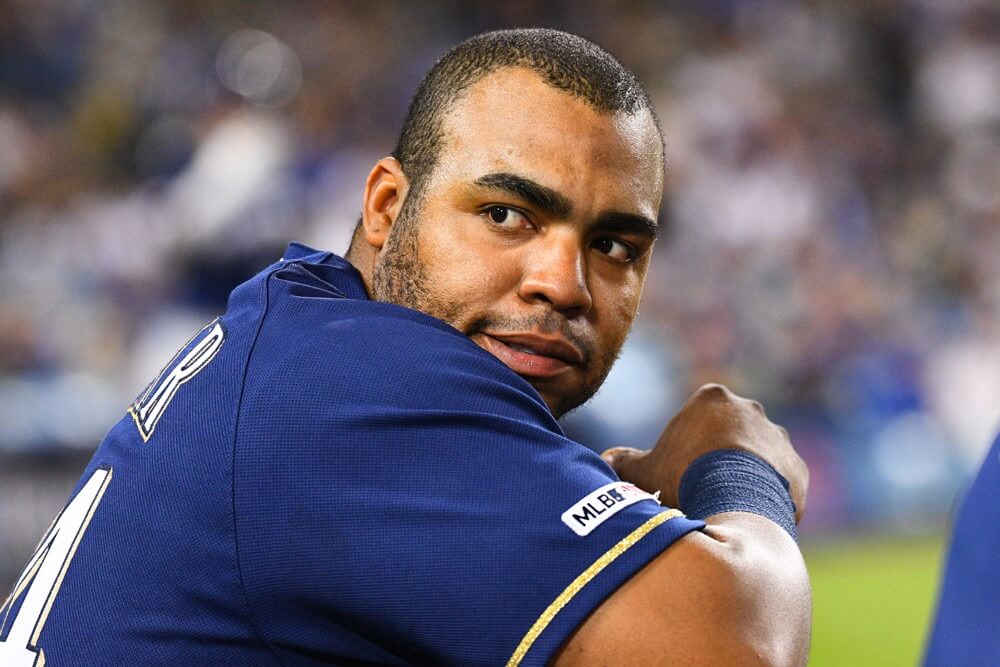 If you have not yet watched the new episode of Game of Thrones (I mean, why not?!?) you may want to skip ahead and just read about the players.

We are one month into the Fantasy Baseball season and more importantly, we have survived the #BattleofWinterfell! The results surprised me. I expected there to be more death and I was surprised by the fighting. I was very happy with the final blow to the Night King, as Arya pulled the Michael Jordan and delivered the fatal blow. Arya, for those who are not familiar, starts off as a little girl who has no desire to be a lady but rather wants to be a warrior. At first, she possesses little to no power, but as we have seen, power can come from unexpected places. It is the same in Fantasy Baseball, and I wanted to dive into a couple of Arya-esque hitters, those who we did not expect to do so, but have provided power in the first month of the season.

I also want to look at those we drafted expecting a ton of power and well have come up short. I debated who to name this group after since there were multiple disappointing fighters in GoT. First, Jon Snow seemed destined to a battle with the Night King… but instead fought off a field of the dead and somehow thought he could take on a dead dragon. The other disappointment was the Dothraki, who we have never seen lose a fight in an open field… yet completely got annihilated by the dead. We will name this group the Dothraki… those who look powerful but have been anything but so far this season! Okay, enough Game of Thrones. I could go on and on about it, but you came here for my Fantasy Baseball thoughts.

Yandy Diaz has 7 home runs in just 109 plate appearances for the Rays this season. He had just one homer in 299 MLB plate appearances with the Indians in 2017-2018. When the Rays traded for Diaz many thought they would teach him to lift the ball and that would be an easy explanation… if it was true. Diaz has a 2.9-degree launch angle this season, while he had a 4.4 mark in 2018. He does have a career-high 30.1 percent flyball rate, with a 56.2 percent groundball rate. So what explains the power gains? He has a 31.8 percent HR/FB rate. That means that he hits the ball in the air about a third of his at-bats, and so far a third of those fly balls have left the yard. The problem? That is a very high number and tough to sustain. The only hitter with a HR/FB over 30 percent in 2018 was Christian Yelich (35 percent). Going back to 2010, there have been just six hitters to finish a season with a HR/FB rate over 30 percent. Can Diaz join this group? Yes, but the chances are slim.

While the power has been a huge plus to Diaz’ game, it is still tough to trust the power is for real until we see him begin to lift the ball more. I am not saying to sell Diaz, as I am actually quite high on him, but the power pace seems unsustainable.

Yandy Diaz look like he eat a bowl of nails for breakfast… without any milk pic.twitter.com/MmdG9PZbgq

Ozuna hit 37 homers in 2017, which was aided by a 23.4 HR/FB rate. That dropped back down to 13.9 percent in 2018 and the HR total dropped to just 23. However, he already has his 10 this season and is looking like the 2017 version of Ozuna, except better – this form is sustainable! Ozuna has a career-high 14.2-degree launch angle this season. He has sat between 10.1 and 10.8 in each of the past three seasons. He has a career-high 44.1 percent flyball rate while lowering his ground ball rate (36.8 percent) below 40 percent for the first time in his career. His 33.3 percent HR/FB rate is likely not sustainable, but he is no longer reliant on a high HR/FB rate to hit homers. He also has a career-high 51.5 percent hard-hit rate. He is hitting the ball hard a bunch and lifting it more than ever. The early season power is for real and he should be able to approach his 2017 home run totals.

La Stella is tied for the Angels team-lead in homers, at seven. That is already a new career high for him. La Stella has a 36.2 percent fly ball rate, which would be the second-highest of his career. His 46.4 percent hard-hit rate is also a career high. Yet, his 87.6 MPH exit velocity is on par with his career norms. He also has a 13.5-degree launch angle, which is oddly enough not far off from his career norm.

La Stella is a huge winner of the juiced ball. There really is not much that different in his hitter profile to believe that this pace will keep up. La Stella could hit 20 homers this season, but I would be shocked if April does not end up being the best month of his season.

Joc already has 10 homers in just 105 plate appearances. There’s a lot to like in his hitter profile as he has a career-high 50 percent hard-hit rate, once again is sporting a 43.3 percent fly ball rate. His launch angle is 13.4 degrees, which is down two degrees from last year, but up over two degrees from his career norm. But, much like Diaz, his 34.5 percent HR/FB rate seems too high. I would expect that number to decrease. However, unlike Diaz, Pederson hits the ball enough in the air that even when that number decreases, he still hits the ball hard and in the air, enough to reach 30 homers for the first time in his career. Joc has hit 25-plus homers in three of his last four seasons, but never more than 26. That changes this year as the Dodgers slugger will sport a HR/FB rate around 20 percent (his career norm) if not higher.

Jesus Aguilar has likely been the biggest bust of the season so far. He is well below the Mendoza line and as of writing this, has yet to hit a home run, after belting 35 in 2018. It cannot get any worse, but the real question is can he bounce back? So far this season he has a 37 percent hard-hit rate, which is down from last season (44 percent). However, his fly ball rate is 40.7 percent, which is just two-tenths of a percentage point lower than last season. His launch angle is 14.4 degree, while last year was 16.2. Since he has yet to hit a homer, he literally has a zero percent HR/FB rate. That will not sustain. I do not expect him to get back to last year’s marks, the first month derailed his season totals to a point he cannot fully bounce back, but he still has been making hard contact, even if not as often as last year, and is lifting the ball. He has the ability to hit them in bunches. Let’s not forget that he had just one homer through April last year and then hit 18 in May and June alone. A hot streak is coming, and I would advise holding off on dropping him just yet and being patient with the biggest bust of the 2019 season so far.

Turner does not have a home run yet this season and has just three hits for extra bases, all doubles. Doing a deeper dive… it hasn’t been pretty for Justin Turner who I mean would unquestionable be Tormund in an MLB meets GoT world. Turner does have a 51.9 percent hard-hit rate, which would be a career high. Yet, if you remember, Turner was one of the first hitters to really begin lifting the ball more. He was a pioneer of the airball revolution, yet he is hitting more ground balls this year. He has a 32.5 percent fly ball rate, compared to a 44.2 percent ground ball rate. His launch angel is down to 13.0, which is the lowest it has been dating back to 2015 – as far back as statcast tracks. It had been 18.3 degrees in two straight seasons.

Turner is still making hard contact, which is ideal. The fact that he is not lifting the ball nearly as much as he has in years past is both worrisome and calming all at once. We can identify the issue, and if Turner is able to return to form and just start hitting more fly balls, the power will follow. I would be more concerned if he was still lifting the ball, but no longer making hard contact. I would recommend trying to acquire Turner for a discount.

It was just a couple short seasons ago that Devers was the next big prospect. It hasn’t panned out so far. This year, Devers has yet to hit a home run and has just six extra-base hits, all doubles. To be frank, Devers is having a weird season. He has improved his plate discipline, having a career-high walk rate (11.9 percent) and a career low strikeout rate (17.4 percent), but when he makes contact, it is unlike anything we have ever seen from Devers. He has just a 20 percent fly ball rate, while he was over 35 percent in his first two seasons. His 57.3 percent groundball rate is also a career high. His 3.9-degree launch angle is less than half of what it was in 2018 (10.9). Plus, he is sporting a career-low 32.9 percent hard-hit rate.

Devers is only 22 years old and I am not going to write him off, but this is a very strange start to the season. I didn’t target Devers in drafts and am happy not to have any shares of him. Devers needs to both begin hitting the ball hard again and start to lift the ball before I would want to acquire him in fantasy. For those who do have him, I would wait for a hot streak and try to sell off. I am legitimately worried about him this season.

Ramos has one home run this season and has grounded into more double plays (3) than he has extra-base hits (2). He currently sports a 65.2 percent ground ball rate, the highest among all qualified hitters in baseball. He also has just a 14.5 percent fly ball rate. He has never been much of a fly ball hitter, but that is absurdly low. His fly ball rate has dropped from 30.3 in 2017 to 24.7 in 2018 to 14.5 percent so far this season. His launch angle was 10.9 degrees last year and is just 3.9 degrees this season. His hard hit rate is still 37.7 percent, but it is hard to hit homers when you are hitting such few fly balls.

Ramos will be worthy of owning in fantasy strictly because the catcher position is so ugly, but those expecting him to hit 15-20 homers may be disappointed this season. He can still reach that number if he begins to hit more fly balls, but unless he does he projects as more of a 10-15 home run hitter.