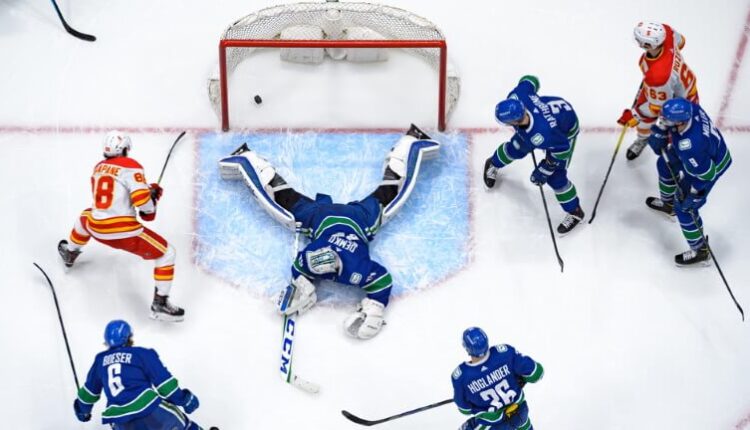 Last week’s fantasy hockey waiver wire report was released shortly after Tyler Bertuzzi’s four-goal outburst. Now, this week’s is coming off another great performance by a Red Wing with Lucas Raymond’s hat trick. I’ll assume at 74% rostered Raymond is likely gone in your league, but if not, be sure to claim him. If you’re like the rest of us, you’ll need to look for other options on the waiver wire. Don’t worry, we have you covered.

LW/RW Andrew Mangiapane, CGY (58% rostered): If you hadn’t checked the stat leaders and were to guess who leads the NHL in goals, who would you pick? Alex Ovechkin? You’d be right, but Mangiapane is tied with him, as well as teammate Elias Lindholm. They each have seven goals in six appearances. Mangiapane has scored in each of his past four outings, including back-to-back two-goal performances in his most recent matches. Goals are the toughest category to find for skaters, so here’s a player that can definitely help in that regard — at least in the short term.

C/LW Jonathan Dahlen, SJS (41%): The 2016 second-round pick has taken a long road to the NHL. Traded twice as a prospect, and he went back and forth between playing in Sweden and playing in the AHL. To start off his first NHL season, he’s playing on the Sharks’ top line with Logan Couture and Timo Meier. This opening was made possible by Evander Kane’s lengthy suspension. It’s a great opportunity for Dahlen, and he’s capitalizing on it. Through six games he has three goals, two assists, two game-winning goals, 18 shots, and a plus-4 rating. He’s certainly worth a claim from the waiver wire as long as he retains that top-line deployment. If he does, he may even be in the running for the Calder Trophy by season’s end as one of the league’s top rookies.

RW Zack Kassian, EDM (32%): Kassian is overshadowed by the superstars in Edmonton, but he’s been very productive to start the season. He’s scored three goals and a pair of assists through four contests. He’s already reached last year’s point total when he had five points in 27 appearances. It was a drastic drop off from his 34 points scored in 2019-20, which was a career-high. Kassian won’t continue scoring at a point-per-game pace, but he could be on track for a new career-high point total. On top of that, he has 23 hits and 18 PIM, two categories he can be counted on to contribute in.

C Ryan Johansen, NSH (25%): Johansen’s rostered percentage is surprisingly low. He was a regular 60-point player for years, but back-to-back rough seasons made many managers give up on him. He’s up to six points through seven matchups, which is far superior to last year’s pace of 22 points in 48 games. His minus-5 rating is of some concern, but that is partially alleviated by his five hits, five blocks, and two power-play points. Nashville isn’t loaded with offensive firepower, but Johansen will continue to be relied upon by the club.

D Colin Miller, BUF (31%): The Sabres are exceeding everyone’s expectations right now. Miller has been having a strong start to the season as a result. Through six contests, he has five assists, eight blocks, 11 shots, 11 hits, and a plus-2 rating. A stark contrast to last year’s minus-20 rating. He had just 12 points last year, and 11 points the season prior. This current campaign is much more like the Colin Miller the Sabres thought they were getting when they acquired him in 2019-20.

D Artem Zub, OTT (23%): Last year Zub wasn’t a player with much fantasy value in most formats. Just 14 points in 47 games during his 25-year-old rookie campaign. However, this year he’s off to a hot start, with three assists in six contests. It remains to be seen if there’s more offense to his game, but the main draw is his peripherals. He has 15 hits and 19 blocks, with his blocks being tied for the league lead. He’s averaging 23:37 of ice time per game, which is over five minutes more than last year’s average. That extra time will surely result in higher peripheral totals.

G Mikko Koskinen, EDM (57%): The Oilers are off to a fantastic start, and look to be the best team in the Pacific division early on. Mike Smith is currently out with injury, leaving Koskinen as the starter, who should get the start in Wednesday’s tilt. Smith is considered the team’s starter, and will likely keep that role when he returns. However, Koskinen is 3-0-0 with a 2.03 GAA and .943 save percentage. If he can continue posting numbers like these, he could earn more and more starts. Even in a tandem, Koskinen will have value being on a winning team.

Are you on board with Brandon’s fantasy hockey waiver wire recommendations? For more fantasy goodness, check out the latest edition of Mark Hillier’s Fantasy Hockey Goalie Streams!