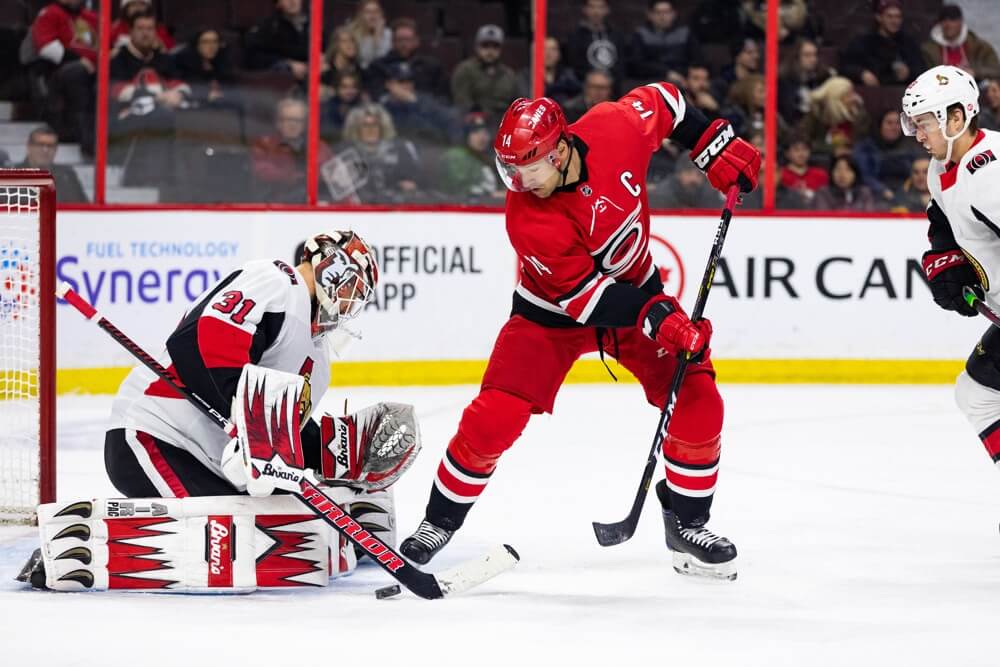 There’s just a month left to go in the season, so making the right pickup could have a substantial impact in the final stretch. We’ll be going over who you should target in the Fantasy Hockey Waiver Wire Report.

RW Justin Williams, CAR (46%): The Captain of the Hurricanes has been leading his team into a potential playoff berth. He’s been racking up the points – posting 15 of them in his past 16 contests. Not long before that, he had a seven-game stint where he produced six goals and an assist. He’s up to 43 points in 66 games, a key reason being his shot volume. He’s up to 195 shots on goal, just three shy of last year’s total despite playing in 16 fewer games.

C Carl Soderberg, COL (46%): Soderberg has been one of Colorado’s main sources of secondary scoring, and is often overlooked in favour of their other talented forwards. Soderberg has nine points in his past eight appearances and is up to 43 points on the season. He’s progressed quite well over the last two seasons, as he had 37 points in 2017-18 and just 16 points in 2016-17. He’s also set a career high in goals with 21 and is playing some of the best hockey of his career.

RW Andrew Shaw, MTL (43%): Shaw is someone that can cover a lot of categories for you. He has six points in his last seven games, including a hat trick. He has 17 hits during that span and is no stranger to taking penalties – as evidenced by having four games with seven or more PIM. He has 33 points in 48 contests, taking a notable step forward from last year’s 20-point campaign.

RW Jacob Silfverberg, ANA (38%): Silfverberg has been rewarding the Ducks for his newly signed five-year contract. He has five points in his past three games, with two of them coming from the man advantage. He’s getting top-six minutes on a line with Rickard Rakell, as well as ample power play time. Someone has to score for the Ducks, and over the past couple weeks, it’s been Silfverberg leading the charge.

RW Vinnie Hinostroza, ARZ (20%): He’s been a big part of keeping the Coyotes afloat despite all their injuries. This leaves Hinostroza in a top-six role, where he’s set career highs in goals (11) and points (30). Eight of those points have been generated in the past seven outings, which is more than anyone else on his team. He can also play all three forward positions, making him a versatile acquisition.

Brett Connolly, WSH (20%): On a team full of star power, Connolly is producing some quality secondary scoring for the Capitals. He has 11 points in his last 15 outings, with eight of them being goals. He’s having a career year with 17 goals and 36 points in 67 appearances, and is shooting the puck much more frequently now – 110 shots on goal compared to last year’s 67.

C Jared McCann, PIT (16%): The 22-year-old has yet to reach his potential at the NHL level, but his move to Pittsburgh is looking to be a positive one. He has five points in his past four games, along with a plus-8 rating. He’s been placed on a line with Sidney Crosby and Jake Guentzel. Anyone playing on Crosby’s wing automatically gets a huge boost in value. Be sure to scoop up McCann before others realize where he lies on the Penguins depth chart.

D Travis Sanheim, PHI (47%): The young defender has taken huge strides this year. He had 10 points in his rookie 2017-18 campaign, but currently sits with 29 tallies in 67 games. 10 of those points have come in the past 11 contests. This isn’t the first time I’ve mentioned Sanheim in a waiver wire report, and it seems that many still sleep on his potential. Keep in mind he’s a former first-round draft selection (2014) and will only continue to improve.

D Devon Toews, NYI (21%): The rookie defenseman has quietly been having a productive season, just like his Islanders team as a whole. He has five goals and eight helpers in 32 contests and is logging regular power-play time on the second unit. Two of his goals have even been game-winning goals, with one of them coming in overtime. He’s quickly earned Head Coach Barry Trotz’s trust, which isn’t an easy thing to do.

G Ryan Miller, ANA (18%): After missing over two months of action, Miller is playing as if he never skipped a beat. In his five appearances since returning from injury, he has a 3-2-0 record while posting a 1.82 GAA and .937 save percentage, along with a shutout to boot. If all the starters in your league are taken, Miller makes for a great option whenever he’s between the pipes.

Did you find Brandon’s Fantasy Hockey Waiver Wire helpful? For more great stuff on the fantasy ice check out our full slate of NHL content.

7 Second Half Pitching Performances You Missed