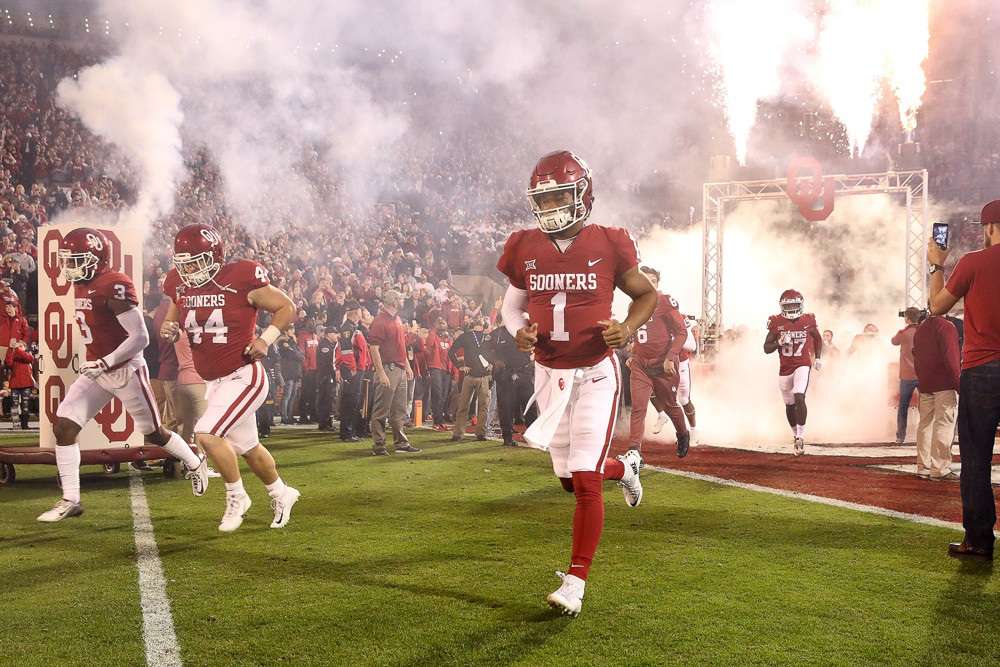 In every NFL Draft, there are polarizing prospects—players who divide the draft community and drive the discussion leading up to the big day. Last year, no player at football’s most important position was more polarizing than Oklahoma quarterback Baker Mayfield, who wound up being drafted No. 1 overall before going on to a very good first year in the NFL. This year, the most polarizing quarterback is the youngster who succeeded Mayfield at Oklahoma, and just as with Mayfield it’s looking more and more likely that Kyler Murray will follow the trajectory of Heisman Trophy winner to first overall pick.

Kyler Murray at No. 1 Overall?

According to Tony Pauline of Draft Analyst, it’s all but a fait accompli that the Cardinals will trade Josh Rosen and pair the 5’10”, 207-pound Murray, who threw for 4,361 yards and 42 scores and ran for 1,001 yards with 12 touchdowns for the Sooners in 2018, with first-year head coach Kliff Kingsbury.

“Cardinals head coach Kliff Kingsbury was telling people last night (at the combine) that it’s a “done deal” the Cardinals will select the Oklahoma Sooners quarterback with the first pick of the draft,” Pauline said. “Whether or not Kingsbury has the final say on the choice remains to be seen, but stay tuned.”

The Cardinals denied this report, because of course, they did. But it only served to add more fuel to the growing fire that Murray’s going first overall.

In his first post-combine mock draft, Eric Edholm of Yahoo Sports predicted that this will be the first time since 1968 and 1969 that the same school produced the No. 1 overall pick in back-to-back NFL drafts.

“All signs point to Murray going first,” Edholm said. “If the Cardinals are going to hire Kliff Kingsbury and attempt to avoid another embarrassing head-coaching decision, why not give the man the QB he recruited out of high school, praised as Texas Tech head coach and who would be a perfect offensive fit.”

Peter Schrager of NFL.com’s on board with the idea as well. “If the Cardinals are pushing their chips all the way in on new head coach Kliff Kingsbury — and yes, they should — they’ve got to let him make this pick,” he wrote. “If Josh Rosen is the ideal guy for his offense, great. But even putting Kingsbury’s glowing October comments about Murray aside, I think the Oklahoma quarterback is the perfect plug-and-play for the new coach’s scheme.”

Will Brinson of CBS Sports believes Murray will be the top pick as well, but he threw a bit of a curveball—a draft-day trade that sends Murray to Oakland. “We are all talking about the Cardinals taking Kyler Murray,” Brinson said, “with the first overall pick and I think that’s entirely possible/likely, but I do want to explore another universe — perhaps one the Cards like even more — where they get to keep their current quarterback, trade down and, you know, give him some help.”

The reason so many draftniks are pointing Murray toward the desert isn’t hard to pinpoint. As Doug Farrar wrote for USA Today, no one’s questioning Murray’s arm talent and athleticism, which has evoked more than a few comparisons to a certain undersized Super Bowl champion in the Pacific Northwest.

“In Russell Wilson’s rookie year,” he wrote, ” I asked him about his natural fit with the Seahawks, given Wilson’s history with a West Coast offense passing game at North Carolina State, and two-back power at Wisconsin. Seattle ran both, and Wilson told me that the stylistic mash-up was so similar, he didn’t even have to change terminology in a lot of cases. Murray would obviously benefit from a set of schematic similarities—I think he’d be best as a point guard-style distributor at the short and intermediate levels with the occasional shot play downfield. Murray has the tools to excel in certain modern offenses, especially those led by complementary route concepts and heavy play-action use.”

“He may not fit the typical quarterback suit,” Farrar continued, “but all those guys kicking themselves now for missing out on Russell Wilson because he was a hair shorter than 5’11” should learn from that mistake and take Murray very seriously as an NFL quarterback with plus potential. If you take the entire skill set into consideration, he’s the best-developed quarterback in his draft class.”

However, there are also reasons why Murray’s become so polarizing—why Andy Kwong wrote for SB Nation that drafting Murray first overall would be a “big mistake.”

The first is Murray’s size—or lack thereof. Murray assuaged some reservations about his height at the combine, but the fact remains that he’s short—really short by NFL quarterback standards. He’s shorter than Drew Brees. Shorter than Mayfield. And almost a full inch shorter than Wilson. The list of quarterbacks his height or shorter who have enjoyed any real NFL success is a short one.

Also, if he hits the field in Week 1 weighing 207 pounds, I’ll eat my hat. That was water weight added for the sake of how 207 looks on a scouting report. His playing weight last year was substantially less, and it’s a good bet he’ll start his NFL career at less than 200 pounds.

Murray elected not to work out at the combine, instead saving that for Oklahoma’s pro day. But he did take part in interview and whiteboard sessions with NFL teams, and according to the NFL Network’s Charley Casserly, it did not go well.

“[T]his was not good,” Casserly said. “These were the worst comments I ever got on a high-rated quarterback and I’ve been doing this a long time. Leadership–not good. Study habits–not good. The board work–below not good. Not good at all in any of those areas, raising major concerns about what this guy is going to do … This guy is not outstanding in those areas and it showed up in the interview.”

This is admittedly the time of year when NFL teams have been known to fudge the truth, and Murray’s agent blasted Casserly. But it also wouldn’t be the first time that Murray came into an interview looking ill-prepared to answer basic questions. That could be a legitimate concern for an NFL quarterback.

In most redraft fantasy football leagues, this is all moot anyway. With the exception of 2QB and “Superflex” leagues and maybe in deeper formats as an upside backup to an established starter, Murray’s not really going to be on the redraft radar. Sure, Mayfield had a nice string of games last year once Hue Jackson was fired, but expecting a substantial fantasy impact from a rookie quarterback is begging to be disappointed.

But in dynasties, Murray’s going to be drafted—it’s just a matter of when. Depth at quarterback is much more important there, and if you waste a pick at the position and fall behind the curve, it can impact your fantasy team for years.

Murray’s talent is undeniable. The arm strength and accuracy. The athletic skill. The ability to repeatedly find open receivers for big gains after extending plays with his legs. There’s a reason why the narrative under center shifted to Murray the instant he indicated a desire to pursue a career in the NFL over baseball. A reason why the Cardinals are reportedly seriously considering drafting Murray one year after trading up to take Rosen.

But I have my doubts. Quite a few of them, actually.

It’s just not a matter of Murray’s size. Or of (potentially) a perceived lack of preparation that you can get away with in the Big 12 but most assuredly cannot in the NFL. Or the fact that Murray’s a one-year starter in a conference where defense is optional—on a good day.

If Murray does wind up in the desert, he’s going to be playing for a team that had the worst record in the NFL last year. Behind an offensive line that allowed the fifth-most sacks (52) in the league. With an unimposing receiving corps outside of the great Larry Fitzgerald (who isn’t taking the top off a defense no more). For a first-year head coach who couldn’t win half of his games at Texas Tech.

A need at the quarterback position would impact this decision, because of course it should. But in most fantasy dynasty leagues, the temptation of Murray’s talent and potential is going to get him drafted before I’d be comfortable taking him.

If he realizes that potential and becomes a superstar, then I’ll be kicking myself—again. I have some experience in that regard. But if Murray struggles (as I fear he will), then I’ll be left breathing a sigh of relief at dodging another overhyped rookie quarterback.

That’s the thing. It feels like there’s very little middle ground with Murray. A few years from now he’s either going to be an NFL star and fantasy starter or the biggest bust of the 2019 draft.

And that makes him quite possibly the single biggest risk/reward pick in this year’s class.