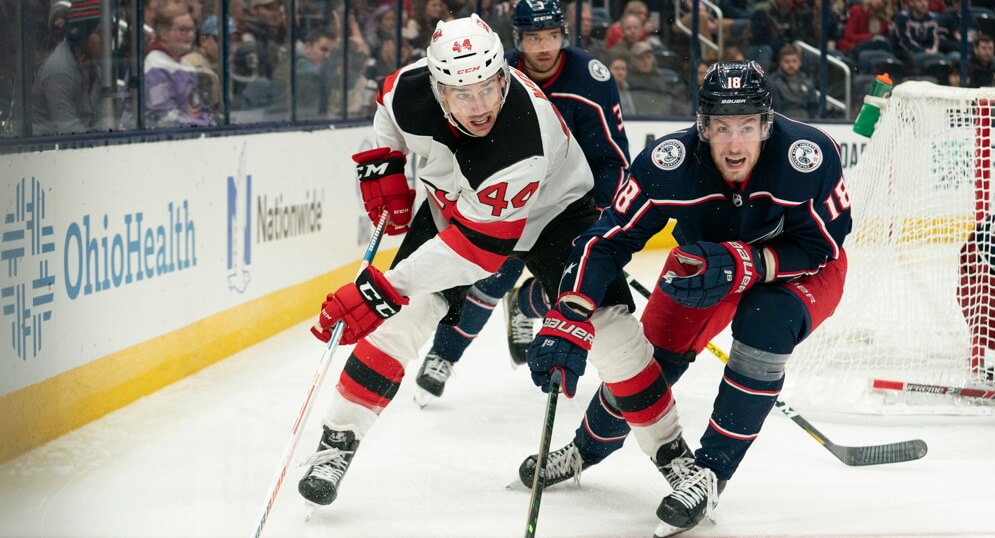 Week 5 of the NHL season brought even more struggles to fill your lineup. The postponed games keep piling up and you’ve probably dug around on your waiver wire once or twice to try relieving your pain. Getting creative in trades can be a better option to helping fix your problems. It can be overwhelming to get that strong lineup ready for a night’s slate of games – but can we get value by taking advantage of teams who aren’t looking ahead? Yes! Let’s look around and see if there are good fantasy hockey trade targets to buy low on and a few to sell high on to strike it rich.

There are many different ways to find players who are undervalued, even if they are stars in the league. You’re looking for slow starts, postponed players on teams desperate for live bodies, and good players who may have flown under-the-radar in the last week or so. Let’s look at this week’s trade targets to buy low on:

Carolina had some Covid-19 issues and one of the players to contract the virus was Teuvo Teravainen. The result has been an extremely slow start. Teravainen only has two assists in eight games to start the year. That won’t continue. Teravainen consistently gets over 60 points a season. He also plays enough PP time and has proven chemistry with Sebastian Aho. I think a rebound in the near future is likely, especially if you buy low for him shortly.

Calgary’s schedule is quite favorable going forward. They’ll get plenty of games vs Edmonton, Vancouver and Ottawa coming up soon. It might be tough to convince another owner to part with red hot Johnny Gaudreau, but what about Sean Monahan? He only has two goals in 13 games so far but Monahan usually gets at least 20 goals in a season, if not 30. Monahan is also still producing enough with assists to give you a teaser of what’s to come. He’s primed to feast on some of these defenses going forward in the North Division. Sign me up and buy low.

The stat line for Dubois looks gross at the moment. One goal in seven games. Only 7 shots in 7 games. He’s still getting acclimated to the Jets system but don’t worry – he’ll eventually take off. His talent is too good. He’ll be playing with strong offensive players every night on his wings and I think he’ll get more PP time as well soon. Dubois has also scored at a 20 goal pace at a minimum every season of his career. Go buy low on him before he breaks out for his new team in Winnipeg. Dubois played better vs Ottawa last night and saw increased minutes.

Bonus target: If you haven’t grabbed Kevin Fiala of the Minnesota Wild or Nazem Kadri of the Colorado Avalanche, time is running out before their teams return again. They’ll have plenty of action to catch up on and their low shooting percentages suggest breakouts are ahead.

Last week, I told you to look into selling high on Tyler Toffoli or Joe Pavelski. Both players are already returning back to their normal pace of scoring and that teaches us a valuable lesson. When a guy goes on an abnormal tear, strike while the iron is hot. It’s usually only for a limited time. Your brain might be in love with the production you see but we can plan ahead and look at more realistic expectations. Let’s look at some players you may want to sell high on:

Boeser has a wicked shot and sits 2nd in the NHL in goals because of it with 10. It’s been a relatively amazing start for him but we have to be a bit wary for the future. He has an injury history. He’s never shot more than 20% in a season and is currently sitting at 23%. The Vancouver Canucks are in a tailspin and could make major changes soon to try and right the ship. If they don’t, things could get ugly fast. I wouldn’t be averse to dangling Boeser like a carrot to sell high for a player on a better team with upside to consistently produce in more competitive games later in the season.

Van Riemsdyk has produced on a career bender with 18 points in his first 13 games. He’s always been a player that you don’t want to turn off because his cold slumps are REALLY cold. I am concerned about what a larger break will do for his season and he’s also shooting 23% anyways. It’s hard to keep that up. Philadelphia’s Covid-19 troubles may help sink this momentum. I’d sell high on him while his stats look peachy, even if you have to wait until it’s closer for the Flyers to return to the ice.

This one is a gut feeling for me. Florida has started extremely hot at an 8-1-2 record. Bobrovsky is 5-0-1 in the starts he has played, but only carries a 0.899 save percentage. It tells me that he hasn’t really improved from last season. It makes you wonder how long Florida has before they start to drop games. Do you believe they are a division-winning team? I can’t convince myself yet. You also have Chris Driedger stealing starts with an incredible 0.937 save percentage. Will it become a split? Maybe. I’d be looking at dealing Bobrovsky for a goalie of a team I trust more who has less competition behind them.

In addition to the trade targets mentioned here, you should probably check out this week’s Fantasy Hockey Waiver Wire as Well!