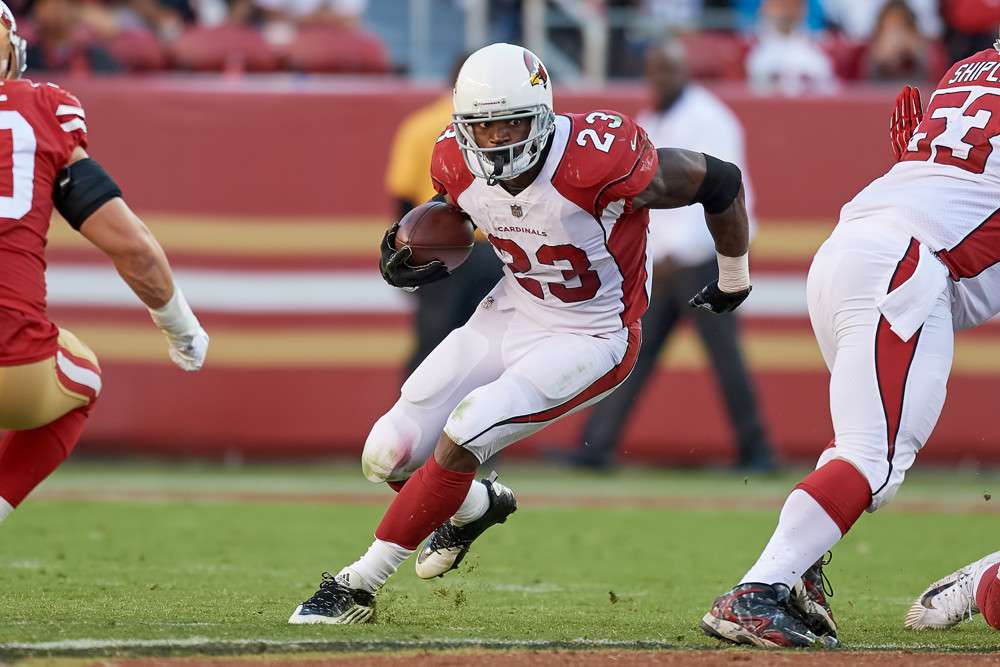 Todd Gurley’s sixth top-6 weekly finish has propelled him into the overall RB1 spot as we eclipse the halfway point in the season. He has proven that his 2016 campaign was the outlier in his brief career. The Saints’ Alvin Kamara led all fantasy running backs in Week 9 with 25.20 fantasy points. Kamara and teammate Mark Ingram are both top-3 fantasy running backs over the past four weeks, despite a combined four lost fumbles. Their recent dominance coincides with the trade of Adrian Peterson to Arizona. Peterson has been no slouch himself. He has been the overall RB10 over the same timeframe. This is especially impressive when considering that Peterson had a Week 8 bye. Peterson appears rejuvenated in Arizona, though he’ll face a tough task on Thursday night.

Kareem Hunt is the only current RB1 who will be on a bye week in Week 10. Hunt has disappointed owners who watched him play three games and decided he was the greatest running back in the history of the National Football League. Yes, he has been a mere mortal over the past few weeks, but he’s still an elite running back in both real life and fantasy. He’s the overall RB3 to this point in the season, and he’s as good a bet as any to finish the year as the overall RB1 when all is said and done. As we look ahead to Week 10, here are some of the matchups to consider when deciding what to do with your fantasy running backs.

Orleans Darkwa has certainly looked the part of fantasy starter over his past four games. He has averaged 73 rushing yards per game during that stretch. Even more impressive is that he’s gained that yardage on just 54 carries. His 5.41 yards per carry over the last five weeks is fifth in the NFL among running backs with at least 20 carries. His workload has been limited by the inability of the New York Giants to remain competitive. In last week’s loss to the Los Angeles Rams, Darkwa had 48 of his 71 rushing yards in the first quarter. His opportunities were greatly reduced once the Giants fell too far behind to continue to run the ball. That shouldn’t be an issue in Week 10. New York plays the San Francisco 49ers. In addition to being arguably the worst team in the NFL, the “0-9ers” also sport a porous run defense. They have given up the most rushing yards and the most receiving yards to opposing running backs this year. They’ve also served up ten total touchdowns to running backs, tied with Indianapolis for the most in the NFL. Darkwa should have plenty of opportunities in this matchup and I expect him to take full advantage. Orleans Darkwa has all the makings of an RB1 this week.

Just when it looked like Aaron Jones had a stranglehold on the Packers’ backfield, he laid an egg on national television against the Detroit Lions. It wasn’t all his fault, per se, as he carried the ball only five times. He missed an early blitz pickup and Green Bay fell behind early in Monday night’s loss. It’s hard to say which of these factors led more to Jones’ diminished workload, and, unfortunately, this is a scenario that may creep up on Jones from time to time. I’m more inclined to believe the reduction in workload was based on game flow, as Ty Montgomery is a better fit for a hurry-up offense trying to play catchup. Green Bay is an underdog in their tilt against Chicago, but I still believe that Jones should bounce back in Week 10. The Bears are not the type of team to jump out to big leads, and their rushing defense is nothing special. They’ve allowed seven rushing touchdowns to running backs in 2017, tied for third-most in the NFL. Forget about Aaron Jones’ poor showing on Monday night and start him with confidence in this matchup.

Tevin Coleman currently ranks as the overall RB20 on the year despite not eclipsing 15 total touches in any single game this season. Coleman was out-touched 79-42 by Devonta Freeman over the first four games of the year, but that gap has been bridged since Atlanta’s Week 5 bye. This is noteworthy because Freeman is dealing with a knee injury. He is expected to play, but don’t be surprised if Coleman gets closer to 12-15 touches this week. Even if his workload remains the same, Coleman is still a consistent fantasy producer. He has quietly scored at least eight fantasy points in six of his last seven games. Coleman has scored 46% of his fantasy points on receptions this season, which may benefit him in this matchup. Coleman will face a Dallas Cowboys’ defense that has given up the second-most receptions on a per-game basis to opposing running backs this year. In what is likely to be the highest scoring game of the week, Coleman has the potential to play a big role and pick up a bunch of fantasy points in the process. I have Tevin Coleman as a rock-solid RB2 in Week 10.

As I mentioned earlier, Adrian Peterson has been a great story since joining the Cardinals. Peterson led the Arizona Cardinals to a Week 9 victory in San Francisco against the winless 49ers. He carried the ball 37 times and threw in two receptions for good measure. Peterson leads the Cardinals into a Week 10 divisional matchup against the Seattle Seahawks on Thursday night. Peterson has spent his career defying the odds, but I just can’t trust him in this matchup. He is a 32-year-old running back who just took on a massive workload and endured a lot of contact. He now must turn around on a short week and face a borderline elite defense. Those are simply too many negative factors to ignore. The Seahawks have not allowed a featured running back to reach 55 rushing yards or average four yards per carry since Week 3. Peterson owners will be hard pressed to sit him this week, but I would not expect much. I consider Adrian Peterson to be nothing more than a borderline Flex play in this matchup.

First, the good news regarding Ameer Abdullah’s Week 9 effort. Abdullah carried the ball a career-high 21 times and scored a touchdown in Detroit’s Week 9 victory in Green Bay. Now the bad. Abdullah gained just 48 yards and finished as only an RB2 despite the score and the large workload. He also fumbled twice in the game, losing one. Detroit’s coaching staff already calls rushing plays at a very low rate, and Abdullah’s fumbles won’t help to change that trend. Abdullah will now face the Cleveland Browns in Week 10. If there’s one strength the Browns possess, it’s their defense against the run. They’ve allowed just 2.9 yards per carry this season, far and away the best in the NFL. With Matthew Stafford averaging a ridiculous 365.3 yards per game in his last three contests, Detroit would be best served to put the ball in Stafford’s hands and let him take advantage of Cleveland’s deficiencies in pass coverage. I do not see Ameer Abdullah making any significant contributions in this matchup, and I’d prefer to keep him on the bench in Week 10.

We are now past the midway point of the season, and I still can’t decide if I was right or wrong about Frank Gore this season. He was on my preseason “overvalued” list, primarily because I didn’t think he would hold up against a full workload at his advanced age. To this point in the season, the Colts have done a very good job of handling Gore. He’s averaged 16 touches per game so far and has been a very reliable fantasy commodity. He has a relatively safe weekly floor, but his ceiling is extremely limited. Gore has yet to finish as an RB1 in any week this season, which is hard to believe considering he’s the overall RB18 on the year. Gore is essentially either a weekly RB2 or worse depending on his matchup. This week he will face a Pittsburgh Steelers defense, which is a much-improved fantasy defense against running backs as of late. Pittsburgh has given up the second-fewest fantasy points per game to opposing running backs over the last four weeks, permitting just 49 rushing yards per game during that stretch. I think this is a bad matchup for Frank Gore, and I do not want any part of him in this game.

C.J. Anderson got off to a great start to the 2017 season. Over Denver’s first four games, Anderson was the overall RB11, averaging 12.93 fantasy points per game. In the four games since, Anderson has averaged just 4.4 fantasy points per contest, finishing outside of the top-40 overall. Simply put, Anderson owners need Denver to win in order for him to reach his fantasy potential. Anderson averages 24.3 touches and 15.8 fantasy points per game in Denver victories and 11.0 touches and 4.38 fantasy points in defeats. If game script is the primary indicator for Anderson’s workload and production, then he is likely in for another quiet week against the New England Patriots. New England is a heavy favorite, making it unlikely that Anderson has much of an impact in this game. The Patriots have also played better defense as of late. Though they are still a bottom-six fantasy defense against running backs on the year, they are top-12 over the last four weeks. I do not expect C.J. Anderson to be anything more than a potential Flex in this matchup.

SLEEPER OF THE WEEK:

Heading into the season, fantasy experts and players alike assumed that Bilal Powell would be handed the keys to the New York Jets’ backfield and that Matt Forte was simply an afterthought. I didn’t think the gap would be as wide as most, but I also didn’t expect it to be as close as it has been through the first half of 2017. In fact, Forte has outscored Powell on a per-game basis in standard leagues (8.33-8.13), and the gap is even more pronounced in Forte’s favor in PPR leagues due to Forte’s 30-18 advantage in receptions. Following Forte’s season-best RB4 finish in Week 9, it seems the fantasy community is now suddenly ready to value Forte over Powell heading into Week 10. I think that may be an overcorrection based on a results-oriented analysis. Powell has still out-carried Forte 83-57 on the season, and I’d still prefer Powell to Forte in this matchup. Tampa Bay has allowed seven rushing touchdowns on the season to opposing running backs, tied for third-most in 2017. I believe that Bilal Powell will exceed expectations and finish as an RB2 in Week 10.