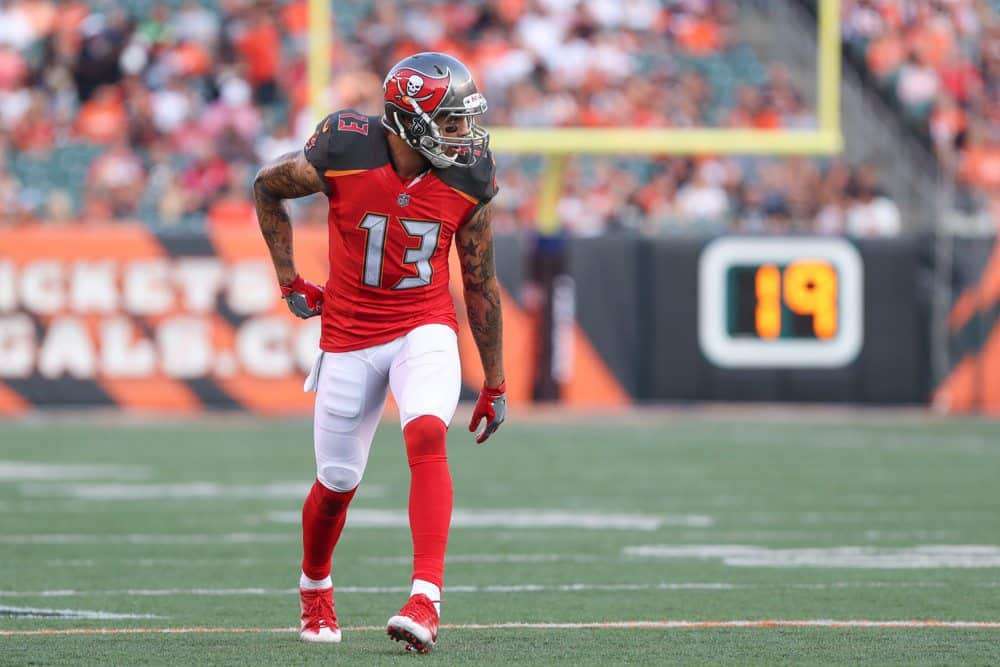 I guess this is the part where we talk about Odell Beckham Jr. again. He’s dealing with a sprained ankle that could force him to miss a game or two, hence why he’s moved down the rankings from No. 3 to No. 4. It’s still possible that he’s ready to go come Week 1, but drafting an already injured player could be fatal. He’s still worth a first-round pick, but the glass really is half empty here. His tantrum following the tackle scared me more than the injury itself, and if we’ve learned anything from Dez Bryant, it’s that you don’t make friends with divas.

Anyway, also moving up is Michael Thomas. He replaces T.Y. Hilton at No. 7, because, well, Andrew Luck happened. Other than that there are no real changes, aside from some serious Mike Evans lovin’. Here’s how the wide receiver rankings look with just a couple of weeks until the real stuff kicks off:

The Falcons seem determined to scare us. Good on them for wanting to fire up Julio Jones early, but starting him in Week 3 of the preseason is a headshaker. If we learned anything from OBJ, it’s that these things can quickly go haywire, but we still have to remind ourselves that the great thing about Julio Jones is his real life football skills. His athleticism, physicality, and strength convert nicely into fantasy, and really, it’s like having Rambo running up and down the field.

We already know about Jones’ route running, but did you know he’s led the NFL in yards per game during the last two seasons AND caught over 100 receptions twice in his career? If you watched his lazy nine-reception, 180-yard clinic against the Green Bay Packers in the NFC Conference game last year, none of that should come as a surprise. The only concern I have here is the Falcons’ depth. They possess two of the better running backs in the league in Devonta Freeman and Tevin Coleman, so I’m still curious to see how they balance an elite wide receiver as well as run/pass mix this season.

Owning the first pick is great. Only this year, it pretty much locks you into Jones, a running back or one other option – and his last name happens to end in O-W-N.

[the_ad id=”384″]Antonio Brown is the undisputed fantasy champion for a reason. We’ll see him for the first time in the preseason against the Colts on Saturday, but don’t expect the workload to be huge. Just keep in mind he’s caught more passes, more yards and more touchdowns than any other NFL receiver dating back to the start of 2013, and on an offense that continues to stock up on talented pass blockers and big-bodied offensive lineman, you really can’t go wrong here.

Brown caught 106 passes for 1,284 yards last season and was a touchdown shy of a baker’s dozen. As the saying goes, you’re only as good as the people you surround yourself with, and as far as Big Ben’s offense goes, let’s just say the positivity is-a-flowin’. The Steelers finished in the Top 10 in yards and points per game last season for the third consecutive year, and even though a lot of that is a credit to Brown’s production, it’s hard not to expect a quadruple repeat this year.

I stand by the fact that we’re potentially looking at the best fantasy receiver in the making; we just don’t know it yet. Evans has had a pretty convincing preseason, and although that means absolutely zilch, his 115 yards does rank ninth in the league so far.

Evans is one of only five wide receivers to start their career with three consecutive 1,000-yard seasons, joining the likes of Odell, Randy Moss, A.J. Green and John Jefferson. He caught 12 touchdowns in the red zone during his rookie season, and since we’re already seeing a pretty special bromance forming between Evans and Jameis Winston, there’s no rhyme or reason not to be encouraged.

A month ago my original write-up was focused on off-the-field drama. But if you told me we’d be talking about an ankle injury and an on-field spat by Week 3 of the preseason, though, I probably would’ve sent the crying/laughing emoji back.

Last season Odell ranked third among all receivers with 1,367 yards and 10 touchdowns. Injury aside, he did put up 37 convincing yards against the Browns last weekend, and with all of his one-handed circus tricks circulating, it’s still hard to see him not having a pretty crazy year. I guess the great thing about those numbers is, they’re guaranteed at least six times a year, because if you do the math, Odell has accounted for 1,479 yards and 14 touchdowns vs. all NFC East opponents throughout his career. I hate to use the word “distraction” because it is so overused in the NFL, but there are some contract concerns still for Odell that might play a mental factor next season. Even so, it’s hard to see him not putting up another season of 100+ receptions.

How about 60 yards on five catches so far in the preseason? Andy Dalton has those puppy-dog eyes now that he has his No. 1 dude back, and you can tell that the Bengals are trying to re-establish that rapport quickly after throwing Green’s way frequently during the first two games.

Green was on pace for a 1,400-yard season last year before his hamstring went bust, and he was also among good company as one of the most consistent point scoring wide receivers. If Green winds up as your No. 1 guy, don’t fret, because I think his deep-threat capabilities alone will make for some similar numbers. Of course, Andy Dalton needs to actually stay off the turf, and the Bengals’ offensive line needs to block to buy him some time in the pocket, but the addition of speedster John Ross in the draft should draw some big double coverage and perhaps, if we’re lucky, leave Green on an island some of the time.

Time to be real for a moment: This might be the last time we see Jordy Nelson on this list. There have been only two wide receivers aged 32 or over to finish inside the Top 5 in receiving yards in the last 10 years.

Fantasy owners are a hardy bunch, though. For those nutjobs that like drafting early, Nelson has been taken with an ADP of 11. I guess there’s nothing to say he won’t give you another 1,200-yard season, and I mean, Aaron Rodgers, c’mon. This is 2016’s No. 1 point scoring wide receiver we’re talking about here, but if you’re entering a brand new draft and don’t already own shares in Nelson, there may be younger and more promising options out there. The Packers threw 62% of the time last season, and since they still don’t have a sound running game, Nelson is obviously going to see the targets. If you’re in a redraft or dynasty league, though, Nelson could fetch a big return if you sell him at some point in the near future.

Not gonna lie, I’m still a ways away from declaring superstar status just yet. In his rookie season, Thomas’ 92 receptions were good for nine touchdowns and 1,137 yards. However, since adding 10 or so pounds during the offseason, I’ll admit, the second year of his career could be monstrous.

So far, that looks likely. Michael Thomas has put up 45 yards on three catches this preseason and is looking mighty, mighty quick. As always, the thing to really love here is Thomas’ potential. Shipping Brandin Cooks to New England clears up the Saints’ log jam at receiver, and it’s not like teams will be able to play the double team, what with Willie Snead and Ted Ginn Jr. opposite him. To make this all the more perfect, you’re looking at the No. 1 best draft option if you don’t want to select a wide receiver in the first round. Thomas is likely to fall to the second, and since he now looks like a cardboard cutout of Julio Jones, putting your money on him to put up even bigger numbers is, quite frankly, not all that ridiculous.

Normally I like to give some kind of basic statistical analysis, but this one is simple: Andrew Luck needs to get healthy for this to work. Oh, and so does Ryan Kelly.

You can’t say T.Y. Hilton got lucky, but the Colts’ collection of injured players certainly helped Hilton see a career-high 155 targets last season. Chuck Pagano now knows what he has going forward, and even though Hilton could improve on route running, we’re still looking at a wide receiver who you should be drafting with the 15th-20th spot in your draft.

Like a lot of these receivers, they get paid a lot of money to catch a leather object, but they certainly benefit from the situation they’re in. It’s Andrew Luck for god’s sake, and the Colts are infamous for switching the offense on late in games, meaning plenty of opportunities for Hilton to dazzle. If he can improve on his below average 38 yards and two touchdowns in the red zone last year, there’s no telling how high these expectations may soar.

Cooper this high?! I know, there’s still a lot to prove, but this is a big year for Coops, and since he did manage to post four 100-yard receiving games last season, there’s nothing to say that he can’t rise to the challenge.

The Raiders easily feature one of the best-receiving tandems in the league, and Cooper tends to be the kind of receiver that people forget about until the second round. He holds No. 1 wide receiver-type potential, though; he just needs to figure out how to be a better second-half player.

Cooper posted just 39 yards in January last year, and although injuries have been a problem, we have to expect a lot more from the 23-year-old. There’s still a lot to learn, and the added size helps, but I think if Cooper can string together consistent numbers month to month, he’ll more than prove his worth.

This all depends on which version of Dez shows up. Is it the one we saw in the playoffs last year? Or the one that put up a lousy eight yards on one reception vs. the Giants in Week 1?

Dez had 55 yards against the Colts last week, putting up a touchdown to go with it, so as far as confidence goes, there’s a lot to like. One thing is for sure, I think we’re grossly underestimating just how brilliant the Bryant and Dak Prescott connection can be. From Week 8 onward last year, Bryant and Prescott combined for 646 yards and seven touchdowns, which really only shows a glimpse of how great this combination could be. The injuries are, of course, the biggest concern here, and Bryant is going to face elite corners most of the time, but hey, if you don’t take a flier on him in the second round, you may live to regret it.