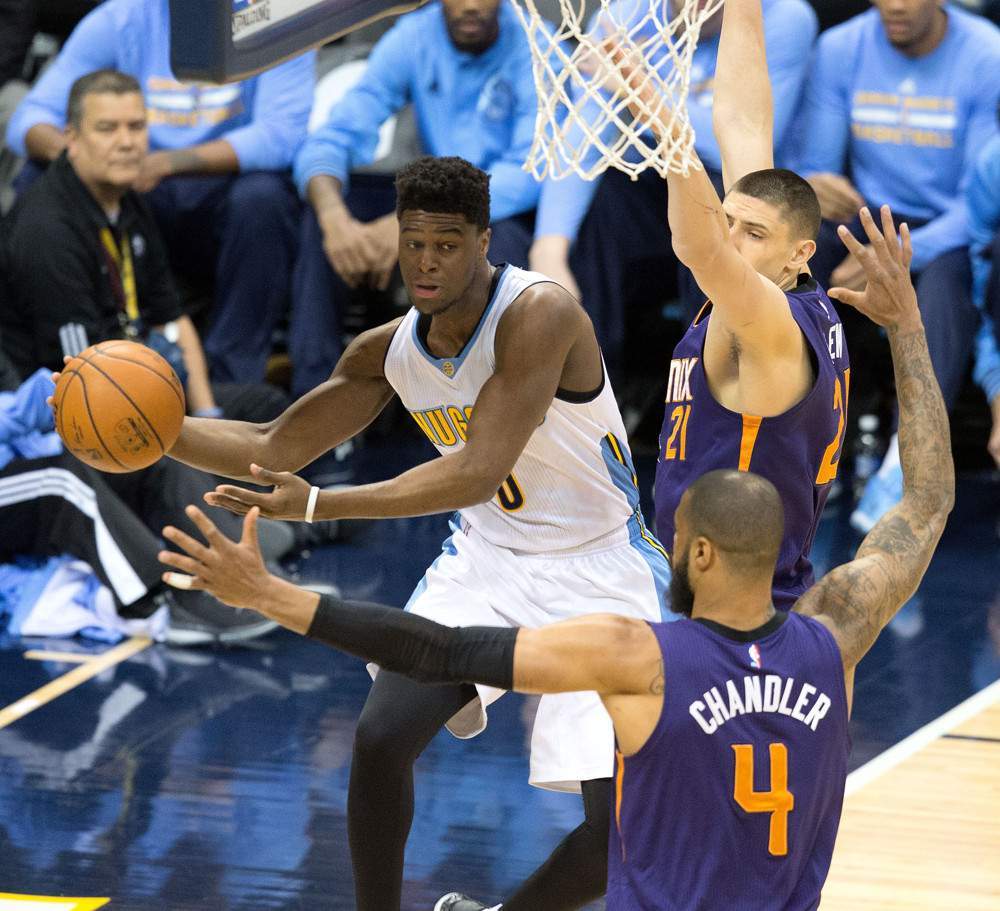 Week 8 of the fantasy basketball season begins as the calendar flips to December and for some leagues, we near the halfway point. Only eight teams play four games this week, giving savvy owners an opportunity to take advantage of the numbers game. Boston and Philadelphia play only twice and so streaming from their player ranks is going to prove inefficient. So, in the spirit of the giving season, here are a few players who may as well have a big streaming bow on their heads.

Fresh off a season-high 28 points in a victory over the Bucks, Mudiay has now scored in double-digits in three of his past five games. Trey Burke (knee) left the game early due to a knee injury and there is a chance he misses additional time. This would open up even more opportunity for Mudiay, thus giving him even more appeal. The playing time continues to fluctuate from night-to-night, however, he certainly appears to have the starting spot locked down.

Mudiay is rostered in just 36 percent of leagues which means there is a decent chance he is still available. Given his impressive performance against the Bucks, he is likely to start trending up in a hurry and so patience is not warranted.

Davis continues to be a steady source of rebounds, albeit in limited playing time. Over the past two weeks, Davis is averaging 7.4 rebounds per game which places him top 45 in that category. In fact, over his past 11 games, Davis basically hauls in one rebound for every 1.8 minutes he is on the floor.

Davis remains available in 75 percent of leagues, meaning he is likely sitting there waiting for his chance. If Jarrett Allen ever got hurt, Davis would become a must-roster player but until then, give him a look if you need some boards.

In three games as the starting point-guard, Frazier has handed out a combined 30 assists. There is certainly some deja vu around this situation, as Frazier has proven before he can facilitate the Pelicans offense. Elfrid Payton (finger) is out for at least the next month which means Frazier has an opportunity to produce sustained value moving forward. Frank Jackson (ankle) also remains questionable, although, had offered very little during his time as Payton’s replacement.

Ownership for Frazier is at just over 10 percent thus leaving him available almost everywhere. That number could spike quickly and so once again, patience is not required here.

The Suns recently waived Isaiah Canaan, paving the way for Okobo to take on more responsibility. Devin Booker (hamstring) suffered an injury against the Lakers which could also add to Okobo’s upside moving forward. Despite failing to record a steal in his most recent game, Okobo has flashed his upside over the past few games. The Suns are going to be cautious with Booker and if he misses time, Okobo could find himself in the starting lineup.

Streaming Okobo certainly comes with some risk given his inexperience, however, the opportunity is likely going to be there. The Suns clearly like what the rookie brings to the table so you need to weigh up the risk versus the reward.

Playing time is the key for Holmes with his per-minute production often a talking point in fantasy circles. Deandre Ayton is the starting center and future for Phoenix, leaving Holmes in a familiar place, coming off the bench. Holmes is coming off a four-block game against the Lakers in which he played 23 minutes. Ayton has a tendency to get into foul trouble and Holmes could be in a position to carve out a solid role moving forward.

Holmes is basically available everywhere at this point meaning you should be able to grab him without too much concern. His defensive upside is not as well-rounded as someone like Nerlens Noel, but he does offer more on the offensive end, boosting his overall value.

Without a doubt, the least surprising streaming option this week is Wayne Ellington. He continues to bomb away on a nightly basis, earning himself substantial playing time in doing so. He has played in excess of 31 minutes in six of his past seven games, connecting on a combined 22 triples in that time. His steal rate has also spiked of late, giving him added value in the majority of leagues.

His ownership has risen slightly across the past two weeks, although he is still available in over 65 percent of leagues. It makes sense to pick him up if he is available given what he can offer your team. A side note to grabbing Ellington, however, is that he may be difficult to part with once you get a taste of what he has to offer.