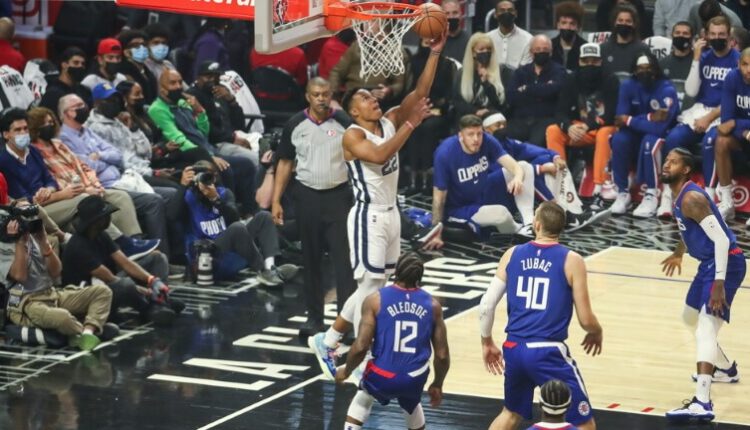 After two weeks of the NBA season, things have gotten off to a wild start. The Bulls’ stock is soaring, as last season’s 11th seed in the East currently sits atop the NBA standings with an impressive 6-1 record. Meanwhile, the defending champion Bucks are on the outside looking in, currently tied for the 10th best record in the East. And these teams aren’t the only ones who have gotten off to surprising starts. A handful of players have raised their stock considerably through these first two weeks of the season, while a number of others have been disappointing thus far to say the least. So let’s take a look at some of these players whose future outlooks have changed for better or worse based on their early-season performances.

Wow! After a rookie season that had plenty of ups and downs a year ago, Cole Anthony has exploded at the start of his sophomore campaign, putting up impressive early-season averages of 19.4 points, 7.6 rebounds, 5.6 assists, and 3.1 threes per game. After a sluggish first two games of the year in which he scored just 10 points in each game on a miserable 23% from the floor, Anthony has quickly become the team’s number one option on offense with four games of 24 or more points in his last six. In that span, the 21-year-old is averaging 22.5 points, 9.0 rebounds, 5.8 assists, and 3.7 threes on a robust 51.1% from the floor and 52.4% from beyond the arc. While this kind of shooting efficiency likely won’t last, the 23.7% usage rate and team-leading 34 minutes per game will.

After some preseason questions about whether or not Anthony would see this type of opportunity after the Magic drafted Jalen Suggs at number five overall, the answer has been a resounding yes. First-year head coach Jamahl Mosley and the Magic organization have made it clear that Anthony is as much a part of this team’s future as Suggs, and there’s no reason he shouldn’t be if he keeps performing anywhere near this level. Anthony’s stock is on the rise, and he looks poised to surpass any and all expectations of him entering the season.

Keeping the focus on second-year players, Desmond Bane has gotten off to a strong start to the year after showing potential in limited minutes a season ago. Looking like the second scoring option thus far for the Grizzlies behind Ja Morant, Bane is averaging a solid 17.7 points per game with 3.3 triples on an efficient 48.0/41.1/87.5 shooting line. And aside from one lackluster performance the other night against the Nuggets, the sophomore out of TCU has shown tremendous consistency with at least 17 points and two or more three-pointers made in every game. His 21.6% usage rate is higher than expected coming into the season, and his 30 minutes per game is second on the team with only Morant playing more than him. Bane has earned the trust of his coaching staff, and his stock is very much on the rise as a result. He won’t blow you away with 40-point outbursts or nightly triple-doubles, but Desmond Bane appears ready for a breakout season.

After discussing two young players on the verge of breakout sophomore seasons, let’s flip the script and talk about 35-year-old Al Horford, who made his NBA debut when Cole Anthony was seven years old. After two straight sub-par seasons with Philly and Oklahoma City, Horford is back with the Celtics, and back to producing strong numbers across the board. Seemingly finished as a top-tier asset in fantasy hoops, Horford has turned back the clock to post some of the best numbers of his career through these first two weeks of the season. Playing 31 minutes per game, the big man is averaging a double-double with 14.4 points and 10.4 rebounds to go with 3.0 assists, 1.2 threes, 1.2 steals, and a whopping 3.2 blocks!

Head coach Ime Udoke raved about Horford’s defense and clearly loves having him on the floor for as many minutes as the veteran can handle these days. So while the occasional rest days to keep the veteran fresh will certainly grow tiresome for fantasy purposes, Al Horford looks fully prepared to hold off father time for one more season. His stock continues to climb despite the Celtics’ early-season struggles.

After putting up some insane shooting numbers last season, the pressure of the postseason seemed to get the better of Joe Harris, and those woes have carried into the early part of this season now. After averaging 13.7, 14.5, and 14.1 points per game in each of the past three seasons, Harris is down to just 11.0 points on an uncharacteristically ugly 36.5% from the floor. That shooting percentage, along with his 36.0% mark from downtown, is a far cry from the 50.5% shooting and 47.5% from deep that he produced a year ago. On top of that, his 1.9 turnovers, 1.0 assists, 0.3 steals, and 0.1 blocks are all the worst marks of his career if you exclude his first two years in Cleveland when he averaged under 10 minutes per game. Harris appears to be in some sort of mental funk ever since the playoffs last season, and until he breaks out of this ongoing slump, his stock will continue to plummet.

Sticking to the earlier trend of second-year players, Isaiah Stewart is another sophomore who entered the season with high hopes of showing some major development, but things haven’t quite gone according to plan for the big man. Through seven games, Stewart is averaging a measly 8.0 points and 6.7 rebounds with 1.1 assists, 0.4 steals, and 1.1 blocks per contest. Despite being in a clear rebuilding season, head coach Dwane Casey still has only given the 20-year-old 23 minutes per game, while splitting the big man minutes with the likes of Kelly Olynyk and Trey Lyles. Furthermore, while not expected to be much of a playmaker or primary source of offense at this point in his career, Stewart’s 15.3% usage rate is 12th on the team, effectively receiving no opportunities to produce on the offensive side of the floor. The former first-round pick still has tremendous upside potential that he flashed in spurts toward the end of last season, but his stock is trending way down after many fantasy players reached for him in the early to middle rounds of most drafts.