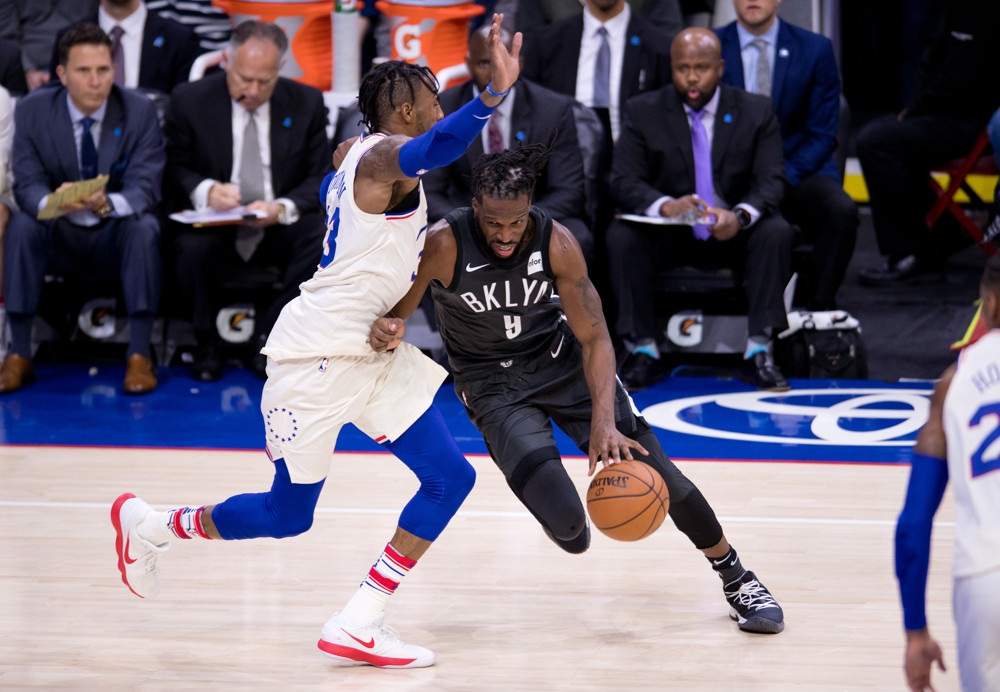 10 games across the NBA for a Friday, including a thrilling overtime game in which the Indiana Pacers held on to edge out the Chicago Bulls. The Brooklyn Nets handed the Memphis Grizzlies their ninth loss from the past 11 games, with DeMarre Carroll continuing his standard league re-birth. I will cover all 10 games, analyzing the fringe players and who could prove beneficial as the week comes to a close.

Dante Exum (25%) – Watch: Exum finished with 11 points and seven rebounds, his fifth consecutive strong performance. He has moved into the standard league discussion with his recent play. He can provide points and assists, and if he can maintain his form, additional playing time could eventually fall his way.

Kyle Korver (16%) – Stream: Korver hit just one triple for the second straight game but remains a streaming option as long as you need literally nothing else from him.

Alec Burks (29%) – Stream: Burks scored 17 points for the third time in his last four games, playing 30 minutes despite the blowout. Whether he is starting or coming off the bench, Burks is a player to stream in if you need some cheap points.

Patrick McCaw (9%) – Drop: McCaw played 18 minutes in just his second game for the Cavaliers, managing just three points with very little else. The minutes could increase moving forward but at this stage, there is no real value there.

Daniel Theis (12%) – Drop: Theis pulled down a season-high 13 rebounds Friday, putting up one of his better games across the season. The Celtics were missing a few players which afforded Theis some additional playing time, so we would need to see this again before considering him for standard leagues.

Brad Wanamaker (3%) – Drop: Wanamaker scored a career-high eight points and really, that is the only reason I decided to mention him.

Dwight Powell (21%) – Drop: Powell has had a couple of decent games but the playing time is simply not there right now and he can be left on the waivers.

James Johnson (46%) – Watch: Johnson scored 17 points in Thursday’s victory, just one point short of his season-high. His production has certainly increased over the past two weeks but his playing time has been wildly inconsistent. Until he can earn himself a regular amount of court time, he is going to be hard to trust.

Tyler Johnson (42%) – Stream: Johnson finished with just eight points Friday but was able to chip in with some peripheral numbers to at least have some value. His playing time has solidified at somewhere in the mid-twenties of late, enough to have some streaming value.

Derrick Jones Jr (21%) – Drop: Jones’ production is far too inconsistent to trust and you can safely steer away from him in standard formats.

Jeff Green (48%) – Add: Green was relatively quiet Friday but still scored in double-digits, adding six rebounds and three assists. Otto Porter continues to work his way back into the rotation but Markieff Morris is out for at least six weeks, meaning Green should continue to see minutes in the 30’s.

Cory Joseph (21%) – Drop: Despite playing up to 30 minutes a night, Joseph simply offers far too little production to even be considered a streaming option.

Chandler Hutchison (15%) – Drop: Hutchison moved into the starting lineup Friday in a move that could be permanent for the rookie. Despite the promotion, he scored just four points in 26 minutes and is really just a place filler at this stage.

Shaquille Harrison (14%) – Drop: Harrison is worth mentioning only if he can find a way to increase his playing time in lieu of the Justin Holiday trade. If that somehow occurs, he is worth watching due to his ability to rack up steals.

Antonio Blakeney (10%) – Drop: Blakeney is another player who could benefit from the Justin Holiday trade but typically provides value in scoring only, making him a potential streamer only.

DeMarre Carroll (41%) – Add: Even after a number of strong performances, Carroll is still only owned in 40 percent of leagues. He scored 20 points Friday, including five triples and there really is no reason he shouldn’t be on a roster somewhere in most formats.

Ed Davis (24%) – Stream: Davis added another nine boards in Friday’s victory, bringing his average over the past 10 games to 7.8 per game.

Shabazz Napier (12%) – Drop: Napier finished with 10 points in 23 minutes Friday, making that four straight games in double-digits. He is a nice addition in deeper formats for those in need of points but standard league owners can likely do a bit better.

Garrett Temple (35%) – Watch: Temple played 40 minutes Friday but scored just six points with very little else. He has been trending down across the past week and the addition of Justin Holiday is likely to impact his playing time.

Dillon Brooks (27%) – Drop: Brooks played just 16 minutes Friday and much like a number of other Grizzlies players, the addition of Justin Holiday is likely going to limit his production.

Tyus Jones (34%) – Drop: Jones’ run of standard league relevance came to an end Friday with the return of Jeff Teague. Jones was back to just 20 minutes and can now be dropped if you were holding him.

Josh Okogie (20%) – Watch: Okogie started for the injured Robert Covington, playing 33 minutes in the victory. His scoring is going to typically be quite low but he does have the ability to contribute across the board, making him a player to watch, at least until Covington returns.

Jonathon Simmons (20%) – Drop: Simmons returned after missing two games with an ankle injury, scoring six points with seven assists and six rebounds. He is playing as more of a makeshift point guard lately and at a pinch, could provide some assists but there is likely someone better around on the waivers.

George Hill (33%) – Drop: Hill scored 12 points which were his highest total as a member of the Bucks which in itself, demonstrates how little value he has at this stage.

Ersan Ilyasova (22%) – Watch: After missing eight straight games with a nose injury, putting up 10 points and 11 rebounds in 19 minutes. Garbage time was a factor with the game basically over after the first quarter and despite his upside, Ilyasova will find it hard to have any consistent value as long as Giannis Antetokounmpo is healthy.

Jeremy Lin (46%) – Watch: Lin had 12 points in 20 minutes but typically doesn’t produce enough in any one category to have real value outside of deeper formats.

Alex Len (46%) – Stream: Len played just 21 minutes Friday, ending with 12 points and eight rebounds. Garbage time was a factor in this game but his recent production certainly makes him a player to stream in if you need some big man numbers.

Kevin Huerter (37%) – Add: Huerter played 33 minutes Friday and was once again able to put up double-digit scoring. His efficiency has been a little concerning of late but the playing time is there and he is worth throwing on the end of your bench if you need scoring, threes, and assists.

DeAndre Bembry (34%) – Add: Bembry has turned things up over the past week, capitalizing on the absence of Kent Bazemore and Taurean Prince. He has been scoring the ball as well as providing contributions in different areas each night. His ceiling is certainly not the highest but his floor appears solid as long as he is getting regular playing time.

Patrick Beverley (44%) – Drop: Beverley scored 16 points to go with a full line Friday, however, the opposition needs to be taken into consideration. Shai Gilgeous-Alexander has been slumping of late which has afforded Beverley some extra playing time but he is yet to fully take advantage of the situation.

Marcin Gortat (30%) – Drop: Gortat came out of nowhere to record season-high marks in both scoring and rebounding as well as minutes played. He has been providing literally nothing outside of occasional rebounding numbers and despite this performance, should be left on the waivers.

Richaun Holmes (26%) – Watch: Holmes has now scored in double-figures in back-to-back games for the first time in almost a month, finishing with 16 points Friday. This was the type of performance he was putting up with some regularity and owners should check back to see if he can find that kind of consistency once again.

De’Anthony Melton (26%) – Watch: Melton played just 16 minutes Friday, finishing with an ordinary fantasy line. He has been struggling of late but the steal rate certainly makes him worth a look as a potential streamer.

Luke Kornet (40%) – Add: Kornet struggled Friday, putting up his worst performance since moving into the starting lineup. Owners need to show a little patience here despite the lackluster effort, and he should be better next time around.

Trey Burke (38%) – Drop: Burke dropped 16 points in 19 minutes Friday but has been in and out of the rotation of late making him far too difficult to trust.

Damyean Dotson (21%) – Drop: Dotson racked up a season-high four steals Friday, also scoring in double-figures for the first time in over two weeks. Dotson has had periods of standard league relevance thus far but inconsistent production renders him a tough player to roster.

Ivica Zubac (26%) – Drop: Zubac contributed Friday but as long as JaVale McGee is healthy, remains a non-factor in standard formats.

Lance Stephenson (20%) – Drop: Stephenson was serviceable Friday but the 29 minutes are unlikely to stick and he can be ignored across the board.

Tyson Chandler (15%) – Drop: Chandler had been rebounding the ball well prior to JaVale McGee returning and could pick those numbers up again at any time. Right now, he simply offers too little to be considered even a streaming option.

Nerlens Noel (35%) – Stream: Noel hit all four of his shots Friday, ending with 10 points and a combined five steals and blocks. Despite playing under 15 minutes per night, he remains a defensive specialist and one of the most consistent shot blockers in the league.

Evan Turner (30%) – Drop: Turner handed out a season-high nine assists Friday but there is nothing to see here and he should be left on waivers everywhere.

Moe Harkless (30%) – Add: Harkless struggled from the field Friday but was able to salvage his line with eight rebounds, three blocks, and one steal. His ability to put up numbers across the board makes him a viable standard league option, especially in a punt-points build.