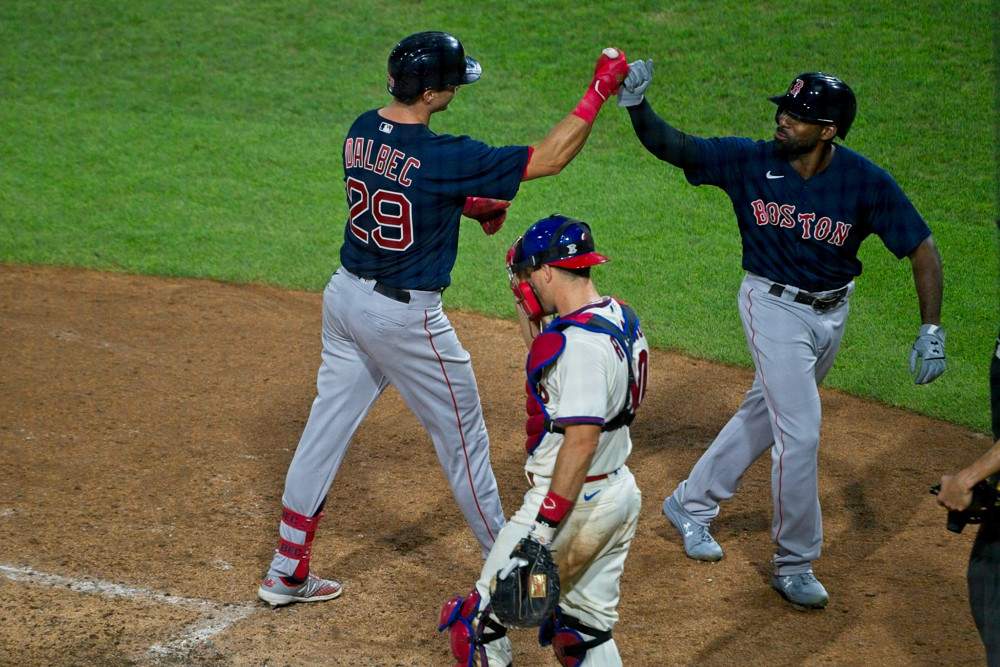 We’ve reached the home stretch of the fantasy baseball season. Doesn’t really feel right, does it? I mean, the season just started a month and a half ago and now we’re less than three weeks away from putting a bow on this crazy 2020 Major League season. If you’re still in contention in your leagues and need an offensive spark down the stretch, you’ve come to the right place. This week’s Fantasy Baseball Waiver Wire report is overflowing with hitters that are absolutely mashing right now that can give your squads that extra boost towards the finish line.

Coming into the season, Jeimer Candelario wasn’t even on the radar for fantasy leagues. The 26-year-old corner infielder was coming off a .203/.306/.337 slash line in 2019 and didn’t help his case by starting the season 0/17 with nine strikeouts in his first five games. But since Detroit didn’t have any better options to replace him, they kept Candelario in the starting lineup and he’s rewarded them by hitting .377 since August 1st which is 2nd over that span, sandwiched between two fellows you might have heard of, Trea Turner and Juan Soto. He’s obviously not going to hit .377 moving forward, but Candelario’s statcast data doesn’t indicate that he’s going to fall off a cliff statistically either. 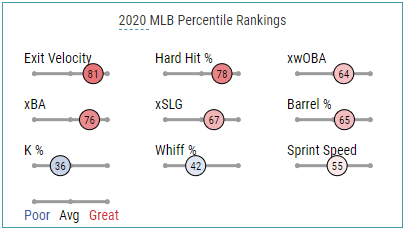 There’s honestly not a massive difference in his swing and contact metrics when comparing 2019 and 2020, but Candelario’s quality of contact has taken a significant step forward this season with his exit velocity, hard-hit rate, barrel%, sweet spot%, and xSLG all improving, some significantly. With the way he’s swinging the bat right now, Candelario needs to be rostered in a much higher percentage of leagues.

As a lifelong Red Sox fan, this season has been the toughest I’ve seen outside of the dramatic Bobby Valentine year back in 2012. The Red Sox haven’t had many bright spots this season, especially on the mound, but Bobby Dalbec is doing his best to bash his way into the hearts of Red Sox fans and the lineups of prospective fantasy managers. Dalbec started his career with a home run in his debut, then proceeded to go hitless in his next four games, before embarking on this current home run barrage. After another home run last night, Dalbec now has a dinger in each of his last five games with six runs, seven RBI, and two walks as well.

He cannot be stopped. Bobby Dalbec has ANOTHER homer for the @RedSox. pic.twitter.com/BfnlODr69Z

This start to his career encapsulates everything us prospect analysts saw from him during his time in the minors. Dalbec’s raw power is elite and unquestioned and he’ll walk at a high clip, but there are major swing and miss concerns that have joined him in the Majors. This is the type of player that will likely have high peaks and low valleys throughout a season, but those high peaks could be truly majestic from a power standpoint as we’re currently seeing. Go get Dalbec if he’s available in your league and enjoy this power surge while it lasts.

Speaking of home run barrages, DJ Stewart is on one of his own with five longballs in his last four games with eight hits in 14 at-bats. If you followed Stewart in the minors, it shouldn’t be much of a surprise that he’s making an impact with the bat right now. Outside of his 2018 Triple-A struggles, Stewart has hit well over the last three seasons posting a .278/.378/.481 slash line with 21 homers and 20 steals in 2017 and a .283/.397/.550 line with 15 homers in 72 minor league games last season.

Stewart’s raw power and patience at the plate have been his calling cards and what can provide value to fantasy teams down the stretch now that he’s starting regularly for Baltimore. Give him a look in 12+ team mixed leagues while he’s barreling everything up and scalding the ball with regularity. Hopefully, this hot stretch can last a bit longer.

There’s “on fire” and then there’s what Adam Duvall has been doing lately. After his 2nd three-homer game IN A WEEK, Duvall is now up to 13 home runs on the season with nine of those coming in his last 10 games. Basically, everyone in Atlanta’s lineup is raking lately and Duvall is one of the guys leading this offensive explosion we’ve seen over the last few days. This is the same Duvall that had back to back 30-homer seasons in 2016 and 2017 before falling from the good graces of fantasy managers with his .195/.274/.365 line in 2018.

Duvall has always had the thump in his bat but hasn’t really had a chance to showcase it much over the last two seasons until recently when he entered the Braves starting lineup starting alongside Ronald Acuña Jr and Nick Markakis in the outfield. If he’s available in your league, scoop him up quick because this type of hot streak can be a difference-maker down the stretch in roto leagues or in H2H playoffs.

One of the glorious aspects of the MLB trade deadline each year is the hidden fantasy values that get hooked from deep waters and reeled up to the surface. That’s exactly what happened with Ty France, one of the pieces Seattle acquired in the Austin Nola trade. While everyone was gushing about Yordan Alvarez, Gavin Lux, and others who were dominating in Triple-A last season, Ty France was quietly putting up arguably the best season of anyone at the level. In 76 games, France slashed a ridiculous .399/.477/.770 with 27 home runs, 83 runs, 89 RBI, and a .372 ISO. Hot damn.

While that was certainly inflated by the hitter’s haven that is the PCL, it also showed that France could make a solid offensive impact if given the chance to start regularly. That chance wasn’t happening in San Diego, but France has started in each of Seattle’s last six games and has recorded a hit in all but one game. For the season, France sits at .316/.388/.487 with a pair of home runs in 76 at-bats. There’s literally no speed to speak of here, but France’s ability to hit for both average and power can be of value in deeper formats. He’s also slotting into a good run-producing spot for Seattle, hitting mostly 5th behind Kyle Lewis and Kyle Seager

After rising to top-25 prospect status in some rankings following 2018, Andres Gimenez struggled in the Double-A Eastern League and squashed all the buzz he had built up. Honestly, I was vastly underwhelmed in my live looks, but tried to keep an open mind as he was young for the pitcher-friendly, cold-weather level. But still, his down 2019 season caused my initial expectations to be kept in check for fantasy following his promotion earlier this season.

Not so much anymore. Gimenez has wrestled the starting shortstop gig from Amed Rosario and is contributing handsomely in both AVG and SB. Despite his success this far, Gimenez still isn’t impacting the ball much with a 27th percentile exit velocity and 5th percentile hard-hit rate, but has recorded a 92nd percentile sprint speed which has led to seven steals to pair with two homers and a .292/.340/.427 slash line. It looks like the Mets are going to give him regular at-bats down the stretch, so fantasy managers in need of a speed boost should give Gimenez a look for the final few weeks.

Sixto Sanchez isn’t the only intriguing pitching prospect in this Miami farm system. Far from it. A first-round pick (13th overall) back in 2017, Trevor Rogers has always intrigued scouts as a 6’5 southpaw with two potential plus pitches and above-average command as well. After a delayed and rough start to his professional career, Rogers showed everyone why he was drafted 13th overall by posting a 2.90 ERA, 1.14 WHIP, and over a strikeout per inning in 2019, ending the season with five starts in the Double-A Southern League. That success has carried over into his debut stint with Miami as Rogers has recorded 3.00 ERA, 1.20 WHIP, and 21 strikeouts through his first 15 innings pitched along with the absolutely gorgeous statcast data you see below. 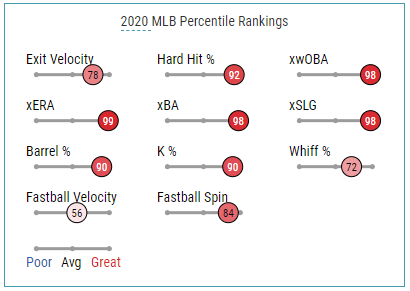 Those two potential plus pitches I mentioned above are a low-90’s fastball and mid-80’s changeup. Rogers has averaged 93.4 mph on his fastball thus far with Miami, which doesn’t necessarily stand out, but he can ratchet it up into the 96-97 mph range at times and his lower arm slot and riding life makes his fastball tough to square up. Both that fastball and his changeup have xwOBAs barely above .200 and whiff rates above 30% through his first three starts and even his slider, which was inconsistent in the minors has performed well with a .213 xwOBA. Depending on how Miami handles their double-headers, Rogers could receive four more starts before the 2020 season concludes.