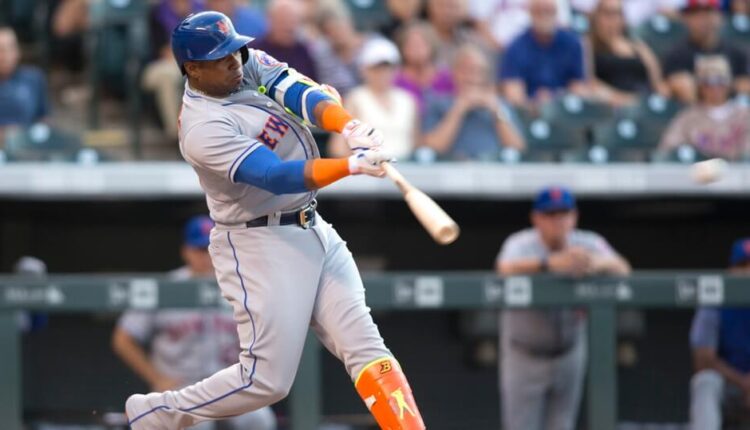 Generally speaking, start most hitters facing the Orioles and Red Sox with their weak pitching staffs.

Most teams play 6-7 games from July 27 – August 2, except for a few teams that only play five games, including the Rangers, Rockies, and Cardinals. It’s just worth mentioning for fringe players, but that doesn’t mean to sit the studs on those teams.

Corey Dickerson projects to bat third for the Marlins. Dickerson’s a solid source of batting average usually hovering around .300 the last two seasons. He missed time due to injury last year and ended with 12 home runs, 33 runs, 59 RBI, and one steal in 78 games. Last season, Dickerson finished with a 34.8% hard-hit rate, and a career-high 44% sweet spot percentage. He should be in line for a solid week with four games against the Orioles.

Hanser Alberto puts the ball into play while hardly walking or striking out. Last season, Alberto finished with a 93.6% zone contact rate paired with a 2.9% walk rate and a 9.1% strikeout rate. In two games so far, he’s 3-for-7 with two runs, one double, and one RBI. Alberto provides a decent batting average and should hit in the top half of the Orioles lineup.

Anthony Santander is a switch hitter that uses a pull heavy (46%), fly ball approach (43.2%). His 89.9 mph average exit velocity ranked above average in the 65th percentile. If you sort by FB/LD, Santander’s 92.4 mph average exit velocity tied him with Bryan Reynolds and Alex Bregman. He’s a nice fifth outfielder that could provide value this first week and into the season. In the first two games, he’s 2-for-7 with one double, one run, and two RBI.

Aaron Hicks projects to bat fifth for the Yankees in between Giancarlo Stanton and Gary Sanchez, which expects to be a great opportunity for runs and RBI. On Opening Day, Hicks led off with DJ LeMahieu on the bench since LeMahieu missed a couple of weeks due to testing positive for COVID-19. The Yankees face the Phillies four times with two each on the road and at home, then they face the Red Sox for three at home. Outside of Aaron Nola and Zack Wheeler, there aren’t many other pitchers to fear on those teams in the week 1 hitter matchups.

Kyle Lewis has looked good during summer camp and hit two homers during a scrimmage last week. In a short sample (75 PA) last year, he hit six home runs with a 98.3 mph average exit velocity on FB/LD right in front of Franmil Reyes. He’s been hitting well in summer camp, and I think he’s in for a solid year.

One concern would be the 38.7% strikeout rate last year, but he’s been under 30% for most of his minor league career. The Mariners play at the Astros for one game, then three at the Angels, and three at home against the Athletics. Lewis already jacked two home runs in the first two games of the season.

Last year Dan Vogelbach hit 25 of his 30 home runs against right-handed pitchers. Vogelbach is a cheap source of power that’s much better in OBP formats. He’ll face the Astros for one, then the Angels and Athletics for three each. The Mariners project to face three lefties in Sean Manaea, Andrew Heaney, and Patrick Sandoval, but I like him as a corner infielder or utility hitter this week.

Throughout his entire career, Yoenis Cespedes always rated as an above-average hitter. In every year of his seven-year career, he finished with a wRC+ over 100 and a career 124 wRC+. Cespedes could be a bounce-back candidate batting cleanup for the Mets and worth a gamble in deeper leagues facing the Red Sox for four games. Eric Cross also recommended adding Cespedes off waivers the last two weeks in his waiver wire article. Cespedes already smacked a home run on Opening Day.

After the All-Star break, Robinson Cano hit nine home runs and 21 RBI while slashing .284/.339/.541. Cano struggled due to injuries in 2019, so that likely explained the first-half struggles for the 15-year veteran. The Mets play four games against the Red Sox with Nathan Eovaldi and Martin Perez as their top two starters. Cano should provide batting average and counting stats this week.

Reportedly Jose Peraza could leadoff against left-handed pitchers, and more of a deep league guy. Last year Peraza was dreadful with six home runs, 37 runs, 33 RBI, and seven steals and slashed .239/.285/.346. However, in 2018, he finished with 14 home runs, 23 steals, and slashed .288/.326/.416. Peraza makes a ton of contact with a 95% zone contact rate but doesn’t hit the ball that hard with a 24.9% hard-hit rate. In the offseason, Peraza adjusted his swing and added a leg kick. This doesn’t mean he’s a breakout player, but I do think he could be a post-hype sleeper if the swing change results in positive outcomes. In two games, Peraza went 4-for-9 with two runs, two doubles, and two RBI.