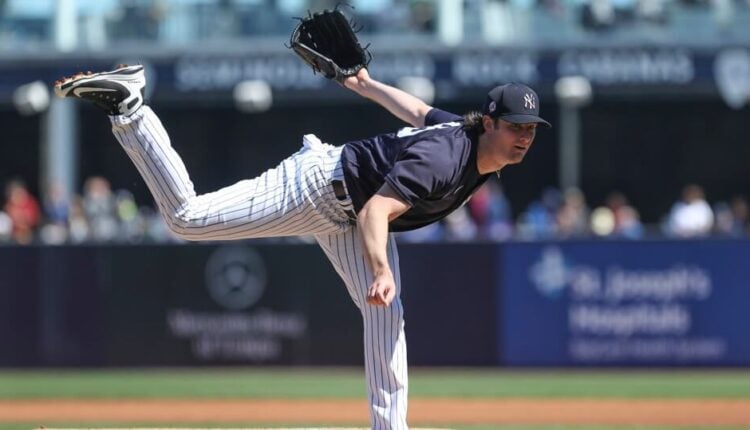 I am very honored to join Tout Wars this year. As someone who has played and followed Fantasy Baseball for a long time, the invitation to Tout Wars felt like I made it. I would not be here today if it were not for the support of so many of you who read and support my work. If you are reading this, you are likely one of those people, so thank you!

Back to Tout Wars. The league I am in is the Tout Wars 12 team mixed draft. It was my first live draft of the season. After drafting slow drafts non-stop since October, this was a thrilling change of pace.

My league is a 5×5 league but with several cool twists. Instead of using batting average, OBP is its replacement. On the pitching side, saves+holds are used instead of saves only, and innings pitched replaces wins. This changes player values to a decent extent. It is essential to be well prepared in a league like Tout Wars. What was my strategy, and how did it shake out? Let’s talk about it.

As you can see, the draft room was stacked. I often had several players queued up, and all were drafted within several picks of my turn. But, let’s talk strategy.

Picking fifth was one spot from my ideal place to be. I have a clear-cut top four hitters that I like at the top of the board in an OBP format: Juan Soto, Fernando Tatís Jr., Jose Ramirez, and Trea Turner.

The idea was to build a balanced team with speed and a high-end starting pitcher at the top. With it being a saves+holds format, the pressure to draft a closer early goes out the window.

If I had it my way, I would have loved to start my draft with one of my top four hitters and then take a starter in the second round. From there, the goal would be to fill out a roster of hitters who provide good power and chip in 5-10 stolen bases along the way to spread the risk. An injury could decimate your team if you draft a player like Mondesi and rely on him for stolen bases. That’s why I like to get a solid source of speed at the top and then spread the risk across multiple players on my roster.

The plan for starting pitchers was to build around a workhorse ace that accumulates a ton of innings. With innings pitched being a category, it can be challenging to accumulate innings while protecting your ratios. An ace is a great place to start.

From a reliever standpoint, I planned to wait and find good holds options that also post solid ratios. If closer who also provide stable ratios fell, I planned to scoop them up. Even if they are not the everyday closer, they could still offer plenty of holds. Some targets included Devin Williams, Aaron Bummer, Taylor Rogers, Paul Sewald, Hector Neris, and Andrew Kittredge. 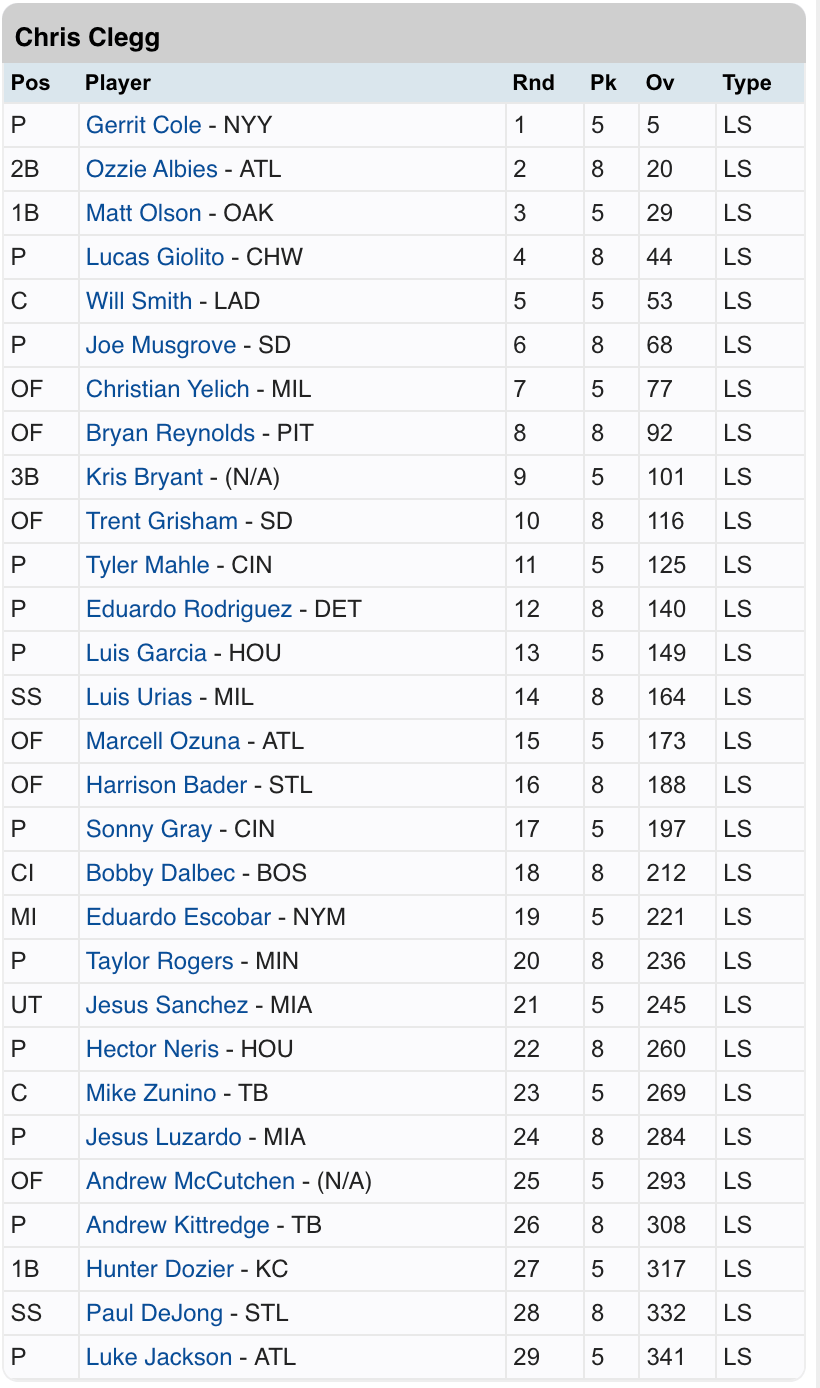 My top three players for this format went with the first three picks. I had hope that Trea Turner might be there at pick five. Unfortunately, he went at pick four. I debated taking Bryce Harper for the high OBP floor and Bichette for the power and speed element. Knowing that several starting pitchers would likely go off the board before my next pick, I opted to take Gerrit Cole. He should provide elite innings with a high strikeout total and ratios that help anchor my rotation. It is the first time I have drafted Cole this season, and I like the idea of starting my rotation that way.

I knew I needed a power and speed threat when it came around to my second pick. Ozzie Albies and Luis Robert both topped my queue. They do not provide the best OBP, but it is serviceable. I felt I could make up OBP later and hoped to do that in the third round with one of Machado or Judge. Albies was my second-round pick to fill second base, which is shallow and can bottom out pretty fast. I thought pairing him with ideally Judge or Machado in the third made sense. The plan fell through as Machado and Judge went to Chris Towers at the two/three turn. I pivoted from my strategy but still took a high OBP player with enormous power in Matt Olson.

Coming into the draft, I set out to wait on first base because plenty of good options are available later in drafts. But, Olson is more valuable in an OBP format where he provides ample power and a high OBP. A potential move out of Oakland could also see his numbers improve even more.

After drafting Olson, I could take a couple of paths. I could look for my second starting pitcher or look for another power and speed threat to build my lineup with. I hoped that Tim Anderson, Byron Buxton, and Randy Arozarena would all make it to me. But they went in succession, followed by Sandy Alcantara right before my pick. Not loving the hitter options at that point, I decided to follow up Cole with Lucas Giolito as my SP2.

After I picked, the catcher run began. I knew I wanted to get one of the top three catchers (Salvador Perez, J.T. Realmuto, or Will Smith). Perez went first, followed by Realmuto with the next pick. I was fortunate that five picks went before my turn, and Smith did not go. I drafted Smith with my fifth pick. He provides a high OBP floor, will benefit from the NL designated hitter and could be the best catcher in an OBP format. I was thrilled to start my team that way.

At this point, I am very light on stolen bases. Ozzie hopefully provides 15-20, but I need to find steals somewhere. But, in round six, I take my third starting pitcher in Joe Musgrove. I am incredibly high on Musgrove for 2022 and have him as my SP11.

By round seven, most power and speed threats are off the board. I will have to chip away with players who will hopefully contribute close to ten stolen bases each. Christian Yelich is there for me in round seven. Yelich is still a high-end OBP asset, and I believe he can get back to being at least a 25 home run/ten stolen base threat.

The foundation of my team is set. My infield and pitching feel good, but with Yelich as my only outfielder, it’s time to hammer away there. Bryan Reynolds sitting there at 92 just felt silly. Reynolds developed power last year and has an elite feel to hit with high OBP skills. He even broke 90 runs and RBI in the Pirates lineup last season.

Kris Bryant filled out my third base spot at pick 101. The position bottoms out quickly, and Bryant has good OBP skills. Bryant can also play in the outfield if necessary. While Bryant may not be a speed-type player, he will likely chip in five-to-ten steals.

Trent Grisham is a high-end OBP asset coming off a down year. He could post an OBP north of .250 while hitting 20 home runs and stealing 20 bases.

After Grisham, I did not love the values of hitters. I wanted Willy Adames as my shortstop but got sniped on him in the tenth round. Only having three starting pitchers at this point, I figured it was time to go back to that well. I was able to get Tyler Mahle, Eduardo Rodriguez, and Luis Garcia in rounds 11-13. It felt good to get those three as my SP4-6 to provide innings, strikeouts, and solid ratios.

I rounded out the fifteenth round by drafting Marcell Ozuna. Ozuna will be back with the Braves and benefits from having the National League designated hitter. Ozuna adds to my team’s power bringing 30+ home run power to the table and a high OBP floor.

At this point, most of my starting lineup is set. I took some shots on some bounceback players like Sonny Gray(17th round), Taylor Rogers(20th round), Hector Neris(22nd round), Andrew McCutchen(25th round), Hunter Dozier(27th round), and Paul DeJong(28th round).

There is also plenty of upside that I drafted in this range, including Harrison Bader(16th round), Bobby Dalbec(18th round), Jesus Sanchez(21st round), and Jesus Luzardo(24th round).

You can also see in the saves+holds format I avoided relievers until the 2oth round. The idea is that you can draft skilled relievers who will get plenty of holds that count the same as saves. In this format, skilled relievers like Josh Hader, Liam Hendriks, and Raisel Iglesias are still the top dogs. But I have no problem waiting until the end-game and taking a group of relievers that will get a ton of holds and have decent ratios. My bullpen of Taylor Rogers, Hector Neris, Andrew Kittredge, and Luke Jackson will get the job done.

As most people do, I like this team at the end of the draft. Certain things fell my way in the draft, but I often found Chris Towers sniping the players I wanted just several picks before it came to my turn.

Drafting in a live draft room of Touts was a new challenge as I have only done slow drafts all offseason. Preparation is massive in a live draft setting, and for the most part, I was ready at every pick. The only stretch of the draft I became frazzled with was between rounds 21 and 23. I used most of the one-minute clock on those picks and took Jesus Sanchez, Hector Neris, and Mike Zunino. My queue had been decimated those rounds, and I made fast decisions. I like Sanchez, but looking back, I likely could have gotten Neris later, despite loving him in Houston.

I like my team moving forward, and it feels pretty balanced across all categories. With FAAB, there are zero dollar bids, and trading is allowed, which allows me to address any needs in-season if I need to. Feel free to let me know your thoughts on my 2022 Tout Wars team!