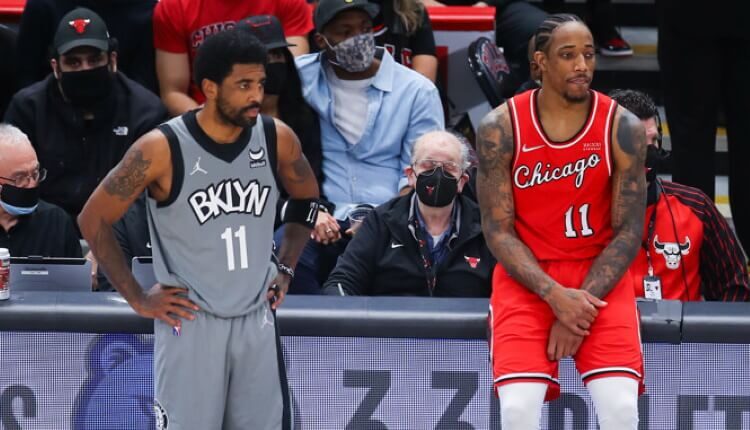 We’ve got a perfectly crafted NBA DFS slate for tonight’s NBA action, folks. Six games. Twelve teams. Plenty of superstars in action. What more can you ask for? Let’s get into the slate.

Offensive Rating: 11th vs. 10th in the league

Defensive Rating: 24th vs. 21st in the league

Predicted Outcome: I’m telling you right now…you’re going to want to stack this game. Both teams play with fast pace, and the Nets pace numbers are probably skewed too low, considering they just got KD back. Two talented offenses, two poor defenses. This should be a barn-burner. I think the Nets will win, considering they’ll have the best two players on the court.

DFS Targets: On the Nets, KD and Kyrie are stars you can count on to hit their value, but maybe not exceed it because of their high salaries. The value play on Brooklyn is Bruce Brown. I’ll probably be overweight Brown, relative to the field. He’s really found a nice role for himself on this team now, and he’s also playing late in games, which is great for his upside. On Charlotte, I like Ball, Bridges, Rozier, and Tsunami Papi in the flesh (Kelly Oubre).

Offensive Rating: 22nd vs. 16th in the league

Defensive Rating: 3rd vs. 26th in the league

Predicted Outcome: The Cavaliers just lost Jarret Allen to a fractured hand, and that will change their team immensely (they will be much worse). Having Mobley and Allen in the frontcourt has helped the Cavs get to the 3rd best defense in the league. Now I imagine Lauri Markkanen is going to have to play more “4” and that’s quite the downgrade in defense. Further, if Okoro gets those minutes, it’s quite the downgrade on offense. I think the Cavs are still good enough to beat the Pacers tonight, who are still finding their identity, but don’t expect CLE to play at the same level.

DFS Targets: Darius Garland should take on more usage with Jarret Allen gone, which also means more pick and roll action for Mobley, so their stocks go up. On the Pacers, Hield, Haliburton, and Brogdon (if he plays) are my only targets. Without Allen, I’m no longer scared of the Cavs defense, so don’t be scared to target some Indiana scorers.

Offensive Rating: 3rd vs. 29th in the league

Defensive Rating: 4th vs. 19th in the league

Predicted Outcome: Suns. Phoenix hasn’t missed a beat since losing Booker and CP3. This is a well-oiled machine, and the Magic are a bottom three team in the league.

DFS Targets: Jae Crowder and DeAndre Ayton have taken over the scoring duties while Booker and CP3 have been out. Cam Johnson had a monster game a couple of games ago, but he was out with an injury last game as well. If he’s in tonight, he should be in your lineups. Miles Bridges is too expensive for the scoring rut he’s been in. Cam Payne is a near lock. On the Magic, I don’t trust anyone against the 4th ranked defense in the league. If you disagree, you can probably count on Carter Jr. and one of Suggs or Anthony.

Offensive Rating: 19th vs. 4th in the league

Defensive Rating: 17th vs. 9th in the league

Predicted Outcome: The Pelicans have been good enough to get Zion coming back to New Orleans to hang out with his team! I can’t believe it. After his second surgery, I thought they’d shut him down for sure, but CJ McCollum has been a great addition to Brandon Ingram and Jonas. While Zion won’t be back for this game, the Pelicans are good enough to keep things close with the Grizzlies. At the end of the day, Ja Morant, Bane, and Adams are the better team (offensive, defensive, and net rating), and they’re playing at home. I feel good about Memphis tonight.

DFS Targets: CJ and Ingram are the only Pelicans I’ll be interested in against this defense, but the Grizzlies should run wild against the Pelicans middling defense. Morant, Bane, Anderson, and Adams are all in play tonight. If you’re looking for deep value, Melton or Jones are the way to go.

Offensive Rating: 5th vs. 30th in the league

Defensive Rating: 14th vs. 8th in the league

Predicted Outcome: Bucks. I don’t care that the Thunder have a top-10 defense. The Bucks are 15 games above .500 and the Thunder are 24 games below .500. Sometimes, picking games is easier than we make it. Bucks win this one.

DFS Targets: Shai is the only player to target on the OKC side. A lot of people have been touting Poku and Bazley as streaming options recently, but that’s not where I’ll be betting my hard-earned dollars. Especially with a potential blowout in order. Giannis is sketchy at his price right now, as well. He fouled out last game, and this game has blowout potential. I like Middleton, Holiday, and Allen, and potentially Serge or Nwora for deep value.

Offensive Rating: 27th vs. 12th in the league

Defensive Rating: 7th vs. 1st in the league

Predicted Outcome: Steph, Klay, and Wiggins should be well-rested, and back for this game against the Clippers. If that’s the case, I expect the Warriors to pull this out, as both of these teams play excellent defense, but the Clippers can’t score. Combined with the Warriors playing at home, Golden State has the better team/talent, and should take this game.

DFS Targets: With the defenses in this matchup, I’ll be focusing on the stars you can count on. This year, at least, the list starts and ends with Steph Curry. Kuminga and Moody may have earned some extra minutes with their play last night, and could provide value, but I wouldn’t be overweight those two in this one. I remain pretty stuck on stacking the Hornets/Nets game.