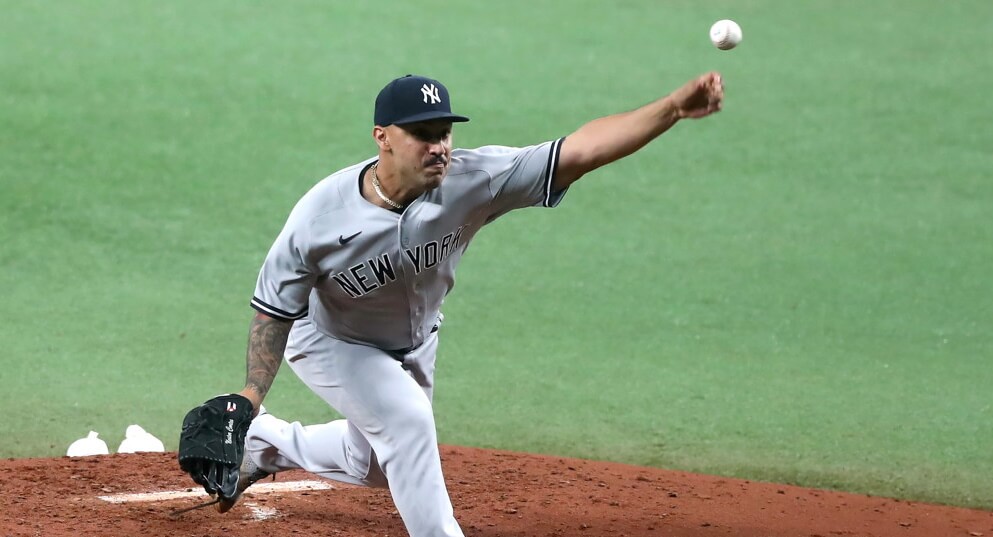 In the final week or so of August, we enter the point in the season where we may find ourselves cutting key fantasy players due to injuries or other concerns. For this week’s installment of our buy or sell series, we have a trio of starting pitchers that most found on the waiver wire given their recent call-ups or early-season struggles.

Since I have some major FOMO with two of these pitchers, it seemed necessary to research what’s going on and whether their success looks sustainable. All three of these pitchers have relevancy in redraft leagues for 2021 and 2022 with the added dynasty league wrinkle. Let’s dive into their profiles and recent success to decide whether we should buy or sell these starting pitchers.

Earlier this week, I experienced a bit of FOMO after Josiah Gray’s start against the Blue Jays. Gray tossed a quality start after allowing five hits, two earned runs, and one walk with four strikeouts. Although that may not wow us, the reason why we should want to buy into Gray rather than sell involves his two filthy-breaking pitches.

Josiah Gray finished with a 33% whiff rate and 30% CSW% overall. Meanwhile, Gray’s slider elicited a 63% whiff rate and 43% CSW%, and the curveball resulted in a 60% whiff rate and 50% CSW%. However, home runs remain an issue given the high flyball rate for Gray. Overall, we’re working with a small sample, but let’s see what’s going on with Josiah Gray.

Gray’s 16.9% swinging-strike rate can make up for the home runs if he limits it to solo home runs. Although, it’s likely that Gray’s ratio regress given the BABIP and LOB%. Gray’s 6.71 FIP, 4.60 xFIP, and 3.87 xERA give us a range of outcomes that leans towards his ERA jumping with natural regression.

Josiah Gray primarily uses the four-seamer, and two breaking pitches (curveball and slider) with a changeup used 2.9% of the time. As noted earlier, both of Gray’s breaking pitches whiff a ton of bats while limiting contact. Meanwhile’s Gray’s four-seamer boasts 3.1 inches more vertical movement than the average four-seamer, which looks like his best pitch movement-wise.

Even Gray’s 10.4% swinging-strike rate on the four-seamer looks solid. Let’s see if Gray can keep the home runs in check, but the two nasty breaking pitches will help sustain the whiff rates.

In 12-15 team redraft leagues, fantasy managers should buy rather than sell (partly) what’s going on with Josiah Gray. The home run rate paired with a high fly ball rate concerns us a bit. Granted, the crazy outlier BABIP allowed and LOB% will regress as we cue in John Means from earlier this season.

In dynasty formats, attempt to buy high on Josiah Gray rather than sell since the Nationals will likely have him as a staple in their future rotation. As a former top prospect with above-average stuff plus solid command and control, Gray is an ideal starting pitcher target.

This fellow Néstor Cortes drew me in with the mustache. Cortes also pitched well over the weekend against the Twins. He tossed a seven-inning quality start with four hits, two earned runs, two walks, and seven strikeouts. Cortes relied on called strikes with a 20% whiff rate and 28% CSW% overall on 104 pitches. His seven called strikes on the slider resulted in a 30% CSW% with zero whiffs.

However, Cortes took advantage of a weaker Twins lineup due to injuries and trades. The Twins rank in the bottom five in wOBA (.283) against lefties over the past month. Cortes typically limits the walks with a 26.5% strikeout rate and a 7.1% walk rate on the season. But the strikeout rate dipped to 22.2%, with a 5.1% walk rate over his past five starts. Cortes boasted quality ratios with a 3.14 ERA and 1.12 WHIP, yet it came with a 4.46 FIP, .269 BABIP allowed, and 85.2% LOB%.

It looks like Cortes ran into some fortune while limiting the home run rate as a primarily fly ball pitcher. Cortes allows a 47.6% flyball rate with a 0.96 HR/9 and 8.7% HR/FB%. Having a flyball-heavy pitcher in Yankee stadium that doesn’t have wipe-out stuff can lend to a riskier profile.

Unfortunately, both breaking pitches for Cortes may have higher whiff rates, but they haven’t fared well with wOBA allowed.

However, Cortes’ four-seamer looks legitimate with a .142 xBA, .222 xSLG, and .194 wOBA allowed. Even his -11 Run-Value on the four-seamer ranks highly as No. 18 amongst all pitchers and behind starting pitchers such as Trevor Rogers (-13) and Max Scherzer (-12). Cortes’ four-seamer also has 2.3 inches more vertical movement or rise on that pitch, which probably adds to its effectiveness.

It’s a small sample of 131 batted ball events, but Néstor Cortes looks like he’s limiting hard contact, evidenced by a 3.8% barrel rate (95th-percentile) and .308 xwOBAcon that ranks in the top 7% of the league. The question remains if Cortes can keep it up since he holds a career 7.2% barrel rate allowed and .372 xwOBAcon.

Should We Buy or Sell Cortes?

So far, Néstor Cortes provides quality ratios with a 2.56 ERA and 1.02 WHIP. Based on his lower BABIP and semi-high strand rate, it seems like the ratios could regress a bit. Add in the lower home run rate plus league averages, then his 4.17 xFIP and 3.39 FIP look like a fair ERA for Cortes. However, something that’s hard to quantify involves the craftiness by Cortes with the change in windup pace and arm slot.

At this point, fantasy managers have rostered Néstor Cortes in 15-team redraft leagues. Although Cortes doesn’t possess nasty stuff like Josiah Gray’s breaking pitches, Cortes pitched well against the White Sox and Twins in his past two starts. As a waiver wire pick-up, we don’t have time to figure out what’s going on and decide whether to buy or sell. Cortes looks like another pitcher that thrives in the heart and shadow areas of the zone.

In trading leagues, particularly dynasty leagues, Cortes looks like a fringey streaming pitcher, especially when the Yankees rotation becomes fully healthy down the line. Overall, I tend to favor pitchers like Cortes, who controls the strike zone though I’m not sure Cortes can continue to limit the hard contact. If you believe more about his ability to suppress hard contact, then you’re probably buying in Cortes more than selling this small sample in 2021.

Another pitcher that I have a bit of FOMO is Triston McKenzie. Over the past four starts, McKenzie boasts a 1.93 ERA and 0.50 WHIP with a 28.6% strikeout rate and 2% walk rate in 28 innings pitched. Although McKenzie’s .154 BABIP allowed looks unsustainable, his 73.8% LOB% isn’t an outlier. Overall, we love the K-BB% and tiny WHIP.

Throughout the season, McKenzie’s ratios don’t look great with a 4.83 ERA and 1.15 WHIP. It’s unusual to see a pitcher with a higher ERA yet a low WHIP. Furthermore, McKenzie’s season-long .207 BABIP allowed looks like maybe he could sustain a lower BABIP. However, it’s hard to compare to previous seasons since he didn’t log this many innings pitched since 2018 at Double-A. Assuming McKenzie’s 68.6% LOB% regresses, it could help his ERA drop, which would boost his value paired with the low WHIP.

Part of the reason for McKenzie’s success in the four-game stretch involves the lowered walk rate compared to a 16.2% walk rate from April to July. Keep in mind, Cleveland kept optioning and recalling McKenzie to and from the minors, which added to the frustration for fantasy managers, which in turn could’ve impacted McKenzie’s consistency.

Let’s take a brief look at Triston McKenzie’s pitch mix and results. McKenzie relies on three primary pitches in the four-seamer, curve, and slider while sprinkling in a changeup 1.6% of the time. He seems to buck the Cleveland pitching trend with examples of Zach Plesac, Aaron Civale, and Shane Bieber typically using their fastball less often.

Meanwhile, McKenzie throws the four-seamer 63.2% of the time with an almost identical curveball (17.9%) and slider (17.3%) usage. In the small sample of 2020, McKenzie increased his four-seamer usage from 53.3% and lowered his changeup from 10%. McKenzie only threw the changeup 25 times this season, but it resulted in a dreadful 1.400 SLG. However, Cleveland seems like one of the teams where we should trust their pitching coaching and development, given their track record.

Interestingly, McKenzie uses the slider a ton against right-handed hitters with a ton of curveballs against opposite-handed hitters. Both breaking pitches wind up as McKenzie’s best whiff pitches and limit the damage from a wOBA allowed standpoint. In 2020 and 2021, McKenzie’s four-seamer boasts above-average vertical movement at 2.4 inches more this season and 3 inches more than the average four-seamer in 2020.

Last season, we noticed some ups and downs with Triston McKenzie’s fastball velocity. From April into mid-June, McKenzie’s four-seamer velocity ranged from 90.1 mph to 92.1 mph in his first start. However, in July and into August, the four-seam sat at 92.2 mph to 93.3 mph. Not that fastball velocity is the main reason for McKenzie’s success, but it’s a positive sign paired with the above-average vertical movement.

Should We Buy or Sell McKenzie?

Given that I mentioned my FOMO with Triston McKenzie, I’m buying more than selling, especially with the recent hot stretch. He came into the season with some hype and concerns, given McKenzie’s 33.1% strikeout rate and 7.1% walk rate in 2020, yet a tall and thin frame. It’s not just the weight but some injury concerns in McKenzie’s past that worried fantasy managers.

Per NFBC ADP in the final two weeks of the season, Triston McKenzie sat right outside the top-200 picks at 214 near Austin Nola, Dustin May, and Jake Croneworth. Some fantasy managers may have added and dropped McKenzie with early struggles and missed out on his recent success. Although McKenzie’s ERA estimators don’t pop with a 4.72 FIP, 4.35 SIERA, and 3.97 xERA, it still gives a glimmer of hope for the rest of the season. Especially when we consider the regression in strand rate though it seems unlikely for McKenzie to keep up the low .207 BABIP allowed.

We’ll leave you with one final image that draws me into Triston McKenzie to buy more than sell what’s going on, which involves the increased swing and miss rates on his breaking pitches. The fantasy community in redraft and dynasty leagues will likely have split opinions and thoughts with McKenzie, which presents an underrated opportunity to acquire McKenzie in a “buy high” attempt. Don’t just use the tall, thin frame and past innings pitched concerns as reasons to stay away.

Update: The write-up above occurred before the news of McKenzie hitting the injured list with should fatigue. Although this may draw concerns, McKenzie still showed more signs of optimism than concern in August.

Cleveland has placed Triston McKenzie on the 10-day IL with right shoulder fatigue (retroactive to Sunday).