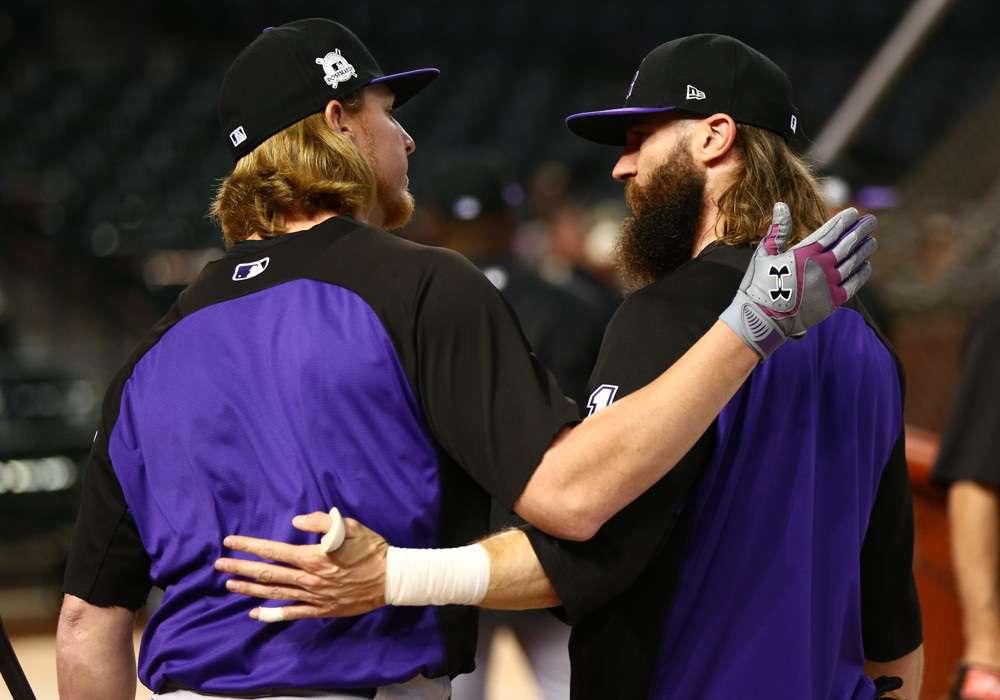 Continuing the theme from last week where I took a look at some underperforming candidates on the offensive side of things, this week I’m going to take a look at some buy-low pitchers that could help your team out in the second half of the season. And if your team is anything like, well, just about every other team out there, you need pitching help. This year has been nothing short of a bumpy ride.

So whether or not it’s a delivery issue, injury, age, or just plain bad luck, let’s take a look at a few buy-low pitchers who are due for some success.

This one is a bit of a cheat since he really hasn’t been all that bad. Virtually every single metric has been identical to what he accomplished last year with very minor differences, except for ERA where he has posted his worst mark since an injury-shortened 2013 season. His 4.24 ERA this year is nearly a full run higher than his FIP, xFIP, and SIERA, as they all peg him as a roughly 3.40 ERA starter. Most of the projection models agree and have him providing much better numbers the rest of the way.

I can’t stress enough that there is nothing wrong with Carlos Carrasco. His strikeout numbers are a bit down, but still above a batter an inning. He’s still barely walking more than two batters per nine innings. And all of the batted ball numbers match up with what he’s done the last few years. He has been just as good, but somehow giving up more runs. And it’s not even BABIP fueled! His BABIP this year is .306, almost exactly the same as last year’s mark of .307. It’s fluky, and you shouldn’t be worried in the slightest.

What you should do, on the other hand, is make sure his current owner is worried about it. Make sure that it’s known his ERA is 55th among qualified starters. Maybe let slip that his Hard Contact Percentage is a full seven percent higher than it was last year (It’s OK. It’s not only fluky, he’s also done this before and been just as good… see 2016). Throw enough shade his way and the Carrasco owner will be practically begging for you to take him off his hands (OK, that’s a stretch, but it’s worth a shot anyway).

Why are second-half leagues not a bigger thing? Head on over to Fantrax and start one now. Relive the magic of draft day all over again!

I’ll go to my grave defending Jon Gray. In 88 innings this season he has the following numbers: 11.45 K/9, 2.76 BB/9, 1.02 HR/9 (not atrocious!), 3.03 FIP, 2.83 xFIP, 3.17 SIERA, and… 5.52 ERA. Of course, unless you’re playing some weird, delightful version of fantasy baseball where you go off of an ERA estimator instead of the number itself, then that ERA is destroying you. It hurts me just to think about the poor teams that keep frustratingly throwing him out there only for him to get lit up every week.

But that’s the thing, nearly every single metric says that Jon Gray is a better pitcher than his ERA indicates. In this era of statistics, sabermetrics, and projections, Jon Gray is by and large a top-flight pitcher. But in real baseball he looks more like someone who needs to be sent down to work out some kinks, and I just can’t get behind that. There has to be some positive regression coming for someone like this who has such good stuff and has good enough command to control it.

Of course, the elephant in the room is the fact that he’s stuck being a Major League pitcher for the Colorado Rockies, meaning he has to pitch half of his games at Coors Field in Colorado. If we dive into his Home/Road splits, there is a very interesting factoid lurking. He’s been just as “bad” at home as he has on the road. Seriously, he has an ERA on the road of 5.40, which is only slightly better than his home number of 5.64. He’s pitched almost an identical number of innings away as he has at home, and while his triple slash line is better on the road, it’s also still not very good.

I can’t give you hope and tell you that he is as good as that FIP, but I can tell you he’s better than this. I personally feel confident enough that his numbers on the road should improve enough to make him a 3.50-3.75 ERA pitcher the rest of the way. That may not be ace material, but if you’re in a daily roster league where you can be even more careful of picking his starts then you could maximize what I have to believe is a much better second half. Please, Jon Gray, for my sanity start making sense.

Lugo is a little bit different on this list because he hasn’t been pitching poorly, nor do his numbers indicate he should be pitching better… he’s doing just fine. No, his value (or lack thereof) lies in the fact that not many people believe in the positive things he’s done since moving into the rotation. His season numbers are stellar, with a 2.76 ERA to go along with a 9.66 K/9 and a 2.30 BB/9. He was also once a decently touted pitching prospect, but one who has fallen into injury/should he be in the pen purgatory.

Looking at the Mets’ pitching staff, it’s easy to see a way into playing time for Lugo going forward. Noah Syndergaard is just now starting to throw again after a finger strain (and it’s a good idea to limit his innings anyway), Jason Vargas is bad and hurt, and there are ticking time bombs in the rotation right now with Steven Matz and Zack Wheeler. So with playing time, what can we really expect out of Lugo?

Some real changes to his pitching repertoire can be at least partly attributed to Lugo’s success this year. He’s throwing his cutter double what he used to, and it has effectively made every pitch in his arsenal better. I wonder if the strikeouts are quite this good, but I do believe he’s better than he ever has been in this regard. If that means you can look forward to an 8.00 K/9, then that’s great for the low price he will likely command. And last year’s ERA of 4.71 was a bit misleading as all of the ERA estimators had him closer to 4.00. So that simple pitching mix change could have been all he needed to take a step to the next level.

He’s never really thrown all that many innings in a season, but with roughly 80-plus games left in the season, if he takes a turn every 5 days and throws 6 innings that puts him at 150 innings or so on the season. Definitely within reason considering he threw 121 innings last year. So don’t worry too much about fatigue or innings caps, and instead buy low on this pitcher simply because his owner might not realize what he has on his hands.