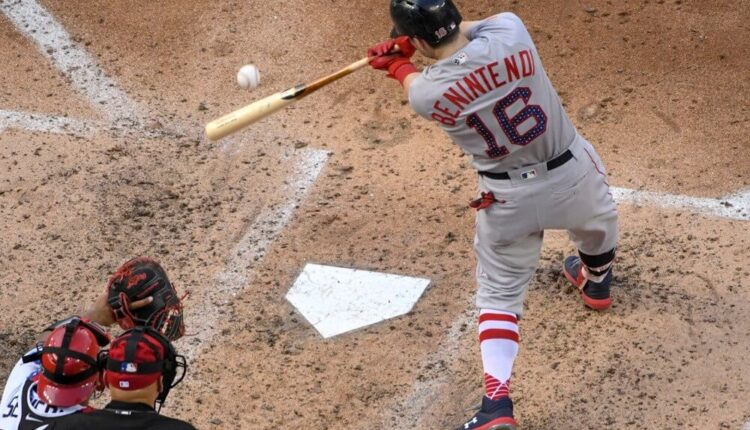 Michael Florio sifts through the data from June to identify buy-low and sell-high hitters for the second half of the season.

“Baseball is a sprint, not a marathon.”

That is a phrase that has been connected to baseball as long as I can remember. Probably since the game was created! But in fantasy baseball, the game is more a bunch of mini-sprints, making up a longer marathon. Sure, you have the players on your team from draft day to the very end, but the truth is many of the spots on your roster also go to playing the hot hand, taking fliers and just throwing stuff at the wall and hoping something sticks. There are likely a few fringy starting spots in your starting lineup that vary based on the weeks and matchups ahead. I wanted to put the month of June under the microscope and point out anything that you may have missed over the last 30 days. Then we’ll use that data to identify the buy-low hitters you can target and the sell-highs you can look to deal over the rest of the season.

Baseball is definitely a marathon, but in the dog days of summer, it could be easy to take your eye off the prize, if even for a day. Don’t worry though, we got you covered at Fantrax.

Buy-Low Hitters to Trade For:

Edwin Encarnacion tied for the league lead in homers in June, so that may seem like an obvious player that people want to own. But this is probably a great buy-high time on Encarnacion. In June he had a .118 BABIP, by far the lowest amongst all qualified hitters. In fact, the second-lowest BABIP in that span was Orlando Arcia, at .172. Encarnacion finished the month of June with a .195 average, despite the fact that he had a 40.3 percent hard-hit rate, on par with last year. You can not get him for cheap, but if you believe in the power lasting in Yankee Stadium, then there is every reason to believe he should see an uptick in batting average going forward. It will take a strong offer, as this is a buy-high, but I still think there could be a discount since you are buying when the average is the lowest it has been in this decade.

Andrew Benintendi had a weird month of June. He hit .312, by far his highest average in any month this season, but he only hit one homer and had his fewest RBI of any month this season (11). Yet, there’s reason to believe July and beyond could be the best baseball for Benintendi in 2019. Benintendi had a 41.7 percent hard-hit rate in June, by far the highest he had in any month this season. He also continues to lift the ball more, having a fly ball rate of 41.6 percent or higher in every month, including 46.5 percent in June. He is still lifting the ball, and this month was the hardest he has ever hit it, yet his HR/FB rate in the month was just three percent. Add in the fact that he got off to a slow start on the year and you should get him for a discount. I would take that shot.

Cavan Biggio had a 59.3 percent hard-hit rate with a 55.6 percent fly ball rate in June. He may have hit just .220, but he made up for it with a .369 OBP on a 19.2 percent walk rate. That plays well in leagues that use OBP or in points leagues. From June 13 through the end of the month he hit .288/.386/.610 with a .322 ISO, 5 homers, 15 runs and RBI, and two stolen bases. That is five-category production. He also had a monstrous day to start July. It could be past time to buy low, but try before the season-long numbers catch up to the recent production.

Brandon Belt led all qualified hitters with a 22.6 percent walk rate in June. He only hit .213, but did have a .387 OBP. Belt has been disappointing this season, but 24 walks to 17 strikeouts in a month? There is use for that in deeper points leagues, which is why he is one of the buy-low hitters you should be looking to target.

Garrett Cooper was awesome in June, batting .372 with four homers, 20 runs, and 16 RBI. I have talked Cooper up and enjoyed his success the past month, but now is the time to try to sell high in trade leagues. While the surface numbers look good, it was propped up by a 44.4 percent HR/FB rate, the second highest in that span. That number is sure to regress, as is his .484 BABIP in June, which is the third highest amongst all hitters. There will not be a better time to sell high on Cooper, if you haven’t already!

Fernando Tatis Jr. has been great when healthy. If you are in any sort of keeper or dynasty league, just keep scrolling, because you shouldn’t be looking to sell Tatis Jr. However, he did have a .531 BABIP in June, the highest in baseball. He also had a 31.3 percent HR/FB rate, despite having just a 31.5 percent hard-hit rate and a 29.6 percent flyball rate. He is immensely talented and providing five-category production, but you may be able to flip him for even more. It’s worth the shot.

Shohei Ohtani is a great hitter and he has proven that repeatedly. But he did finish June with a 56.3 percent HR/FB rate, while no other qualified hitter was over 45 percent. Yeah, that is ridiculously high and sure to come back down. He did smoke the ball, evident by his 55.7 percent hard-hit rate, but he also hits the ball on the ground a ton. He has a 50 percent ground ball rate, but just a 22.9 percent fly ball rate. He also threw off a mound last week for the first time since having Tommy John. As he continues to progress in his throwing program he could see more days off as well, which will obviously hurt his fantasy value as a hitter.

Are you digging on Michael’s buy-low hitters? Is he all wrong on his sell-highs? For more from Michael check out his full archive.