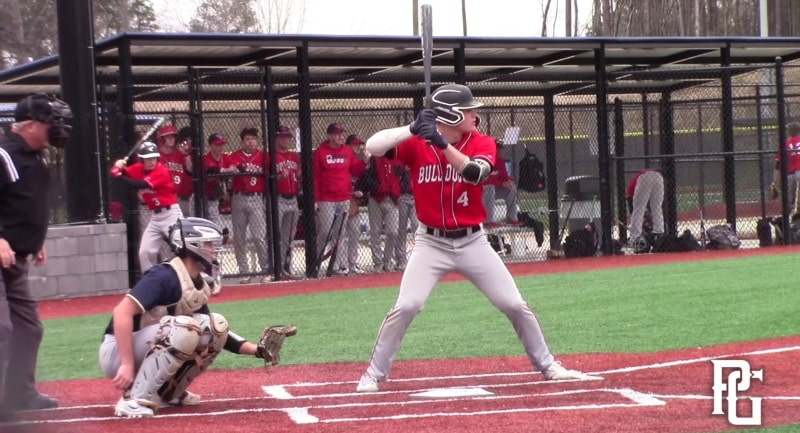 I had the privilege to attend a baseball game for the first time since late 2019. It had been far too long since I had attended a live game, but that all changed this week. I traveled down the road to Winder, Georgia, to get a live look at one of the top prospects for the 2021 MLB Draft, Brady House. House is one of the country’s top high school players and could be a top-10 pick in the upcoming draft. What did I take away after watching the film and seeing House live? Let’s break down his profile.

At 17 years old, House stands at 6’3 and weighs in at 215 pounds. His build is one you describe as muscular. Brady House is built like a house with a rock-solid foundation. He has a strong build from top to bottom but is also extremely athletic. He has broad shoulders to go with a thick lower half. I know I am not the first to say this, but House is built like Nolan Arenado.

Scouts have a wide range of takes on how good Brady House’s hit tool really is. I have seen some grade it a 40, while others have put a 60 future value on his hit tool. I am not here to try and throw a grade on someone I have only seen live once. But, I can report that House had great barrel control and knows the zone well. His mechanics with the bat are clean and consistent.

In the video above, House shows his awareness for the zone with two strikes. He goes down and away makes solid contact. The result was a loud fly out to the opposite field, but House showed he could control the strike zone and send a pitch the other way.

House also shows the ability to turn on pitches inside. In the first pitch House saw in the game, he turned on an inside pitch for a hard groundball down the line. That turned into a stand-up double.

House has also simplified his load and quite his leg kick. The bat takes a direct path to the ball, and like I previously mentioned, he shows good plate coverage.

In the game I attended, House walked three of his five plate appearances. One of them was an intentional walk because first base was open with a runner on second and third. That did not pay off well for the opposing team, as Winder-Barrow catcher Dre Lewis hit a grand slam the next pitch.

House demonstrated a good feel for the zone and the ability to take a walk. I can see House posting high OBP’s in the future because he recognizes pitches well and has a great feel for the zone.

Power is the name of the game for Brady House. The guy has monstrous raw power. The ball explodes off his bat. Just check out the video above. Unfortunately, I did not get to see any bombs from House at the game I attended, but it does not take much to see the power is potentially double-plus.

House’s power plays up to the pull-side, but he can hit home runs going the other way. He has great timing and has posted max barrel speeds of over 78 miles-per-hour. For reference, the average for his age is 65 mph. House grades out better than over 98 percent of hitters in that category.

House produces elite exit velocities as well. He recorded an exit velocity of 108 mph with a wood bat at the WWBA event. His vertical bat angle only aids his in-game power as he consistently attacks the ball at a great angle.

In the video below, House was just 15 years old and hit a mammoth home run. People estimate the ball traveled 450 feet. The power in Brady House’s profile is insane. He could be a 35 home run bat in the MLB.

If there is any tool that is below-average in Brady House’s profile, it’s his speed. House will never be a burner on the base paths; he won’t steal a ton of bags. But, he is highly athletic and moves well for his size. He runs the bases well and is athletic enough in the field, but for future Fantasy Baseball purposes, don’t count on House to steal you any bases.

House was clocked at 7.05 seconds on the 60-yard dash. This grades him as a below-average runner. Speed will not be an asset of House’s rankings. But his hit and power will be worth it for Fantasy players.

I know a player’s glove and arm do not matter for Fantasy purposes, but it is still important to talk about where a player may end up. House plays shortstop, but he has the body of a third baseman. House has a quick first step in the field, and he reacts well. He has a chance to stick at shortstop, but there is a high probability he ends up at third base long term.

Brady House’s arm is where things get fun! When House pitches, his fastball gets up to 97 mph. He has a big arm. House is very accurate on throws to first base. He is more than capable of handling the hot corner with both his glove and arm.

At the time of writing, there is a high probability that Brady House is a top ten overall pick in the MLB draft. Things could change between now and July, but right now, House is a top ten guy. For Fantasy Baseball purposes, House could be a legit source of power and can hit 30 plus home runs in the MLB. In FYPD drafts for this upcoming draft class, House is likely to be a hot commodity. He is off to a hot start to this high school, and if House continues this strong start, he could put himself in the conversation as one of the best prep players in the country.