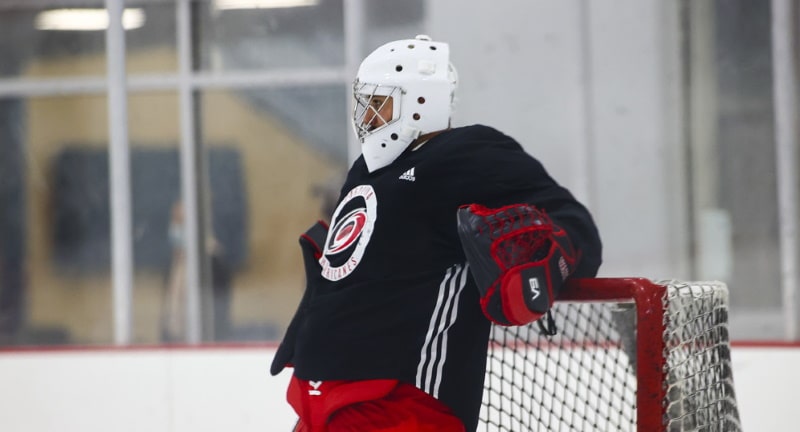 We finally had a stretch of hockey where all 31 teams got to play. However, you can’t keep Covid-19 at bay for long. San Jose saw a game delayed after Tomas Hertl contracted the virus. The New York Rangers also saw Kaapo Kakko and K’Andre Miller hit the Covid protocol list. Let’s hope that we still see a very limited amount of Covid-19 action as we go forward. With the number of games delayed so far, your goalie situation may have been a mess recently. I put most of my focus on that position today. Let’s find some fantasy hockey trade targets to buy low on and some players and goalies to sell high.

When you’re looking to buy low on a goalie, check out their average save percentage from the last two years and see if there’s a large discrepancy. Find injured starters who may be coming back too. Goalies are voodoo. They’re hard to predict, so the potential opportunity a goalie may have is king for fantasy hockey. Let’s look at a few of these candidates.

Vitek Vanecek has held the fort decently well for Washington. He has a .909 save percentage with eight wins on the season. Despite that, I don’t think Ilya Samsonov will be held back for too long from the starting spot and he’s already playing games with Hershey in the AHL for conditioning. Samsonov’s luck has been horrible. Injuries and Covid-19 have claimed opportunities for him to truly breakout as the starting goalie for the Capitals. His chance is coming. You might be able to buy low and steal him from another souring owner.

Another injured goalie is practicing and nearing a return. Mrazek doesn’t have the same potential as Samsonov, but Carolina will play him as their starter with plenty of games to come against lesser teams. He started out hot with a 2-1 record and a .955 save percentage before his thumb injury. Considering James Reimer is at a .897 save percentage, I don’t think Mrazek will have to battle hard for starts if he returns to form quickly.

Calgary is in a big funk. It seems to me that Geoff Ward’s messages to try to spark the team aren’t working. While I’d love to put a goalie here, David Rittich is not exactly a goalie I believe in trading assets for while Jacob Markstrom is injured. How about a great forward instead? Matthew Tkachuk only has one goal in his last nine games, but he at least has 35 shots in the last two weeks of play. That’s good for 2nd in the NHL. I don’t think the Flames are as bad as the recent stretch we’ve seen so expect Tkachuk to pot some more goals soon. It’s always easier to own Tkachuk in fantasy than watching him muck it up against your favorite team on the ice.

We’ve gone through a lot of the hot shooters in the past few weeks to look at trading away. Just like above, I want to highlight some goalies that you should look into selling high on while they’re buzzing. Once again, check save percentages from previous seasons to find some potential trends ahead. Let’s look at one major candidate of regression:

I did not see this coming. Mike Smith has started his season post-injury with a 6-0 record and a .944 save percentage. He’s looked sharp, composed, and is making many tough saves look easy so far. The Oilers have won 11 of their last 13 games and he’s played a major role in why. However, his last two seasons saw Smith post a .898 save percentage and a .902 save percentage respectively. When he gets hot, he is burning hot. Don’t be around for the cold streak that may be coming and sell high.

This is a tough one for me. He’s a Calder Trophy candidate. With eight wins and a .921 save percentage, Lankinen has been a huge reason why Chicago has kept competitive this season. He also has put up big numbers in the Liiga in the past. I just look at Chicago’s blue line and I’m not sure they’ll be able to hold other teams consistently. Lankinen also hasn’t played more than 20 games in a season since 2016-17 in any league, so I’m not sure how he’ll play under an increased workload as the season progresses. If you want to ride with him, I don’t blame you, but I wouldn’t mind selling high to grab a player or goalie who is much more established.

BURNING HOT START ALERT! Zuccarello has only played five games for the Wild so far and has already amassed three goals and nine points. He’s riding a 42.9% shooting percentage as well. Does this mean Zuccarello is about to have a career season? Probably not. Coach Dean Evason is still only playing him around 14 minutes a game and his shot rates continue to drop. He only has 7 in the first 5 games despite the big point totals. If you managed to win the race to grab him off the waiver wire, proceed to immediately sell him to another desperate team who put in a claim.

In addition to these fantasy hockey trade targets, make sure to check out our latest Waiver Wire Recommendations!