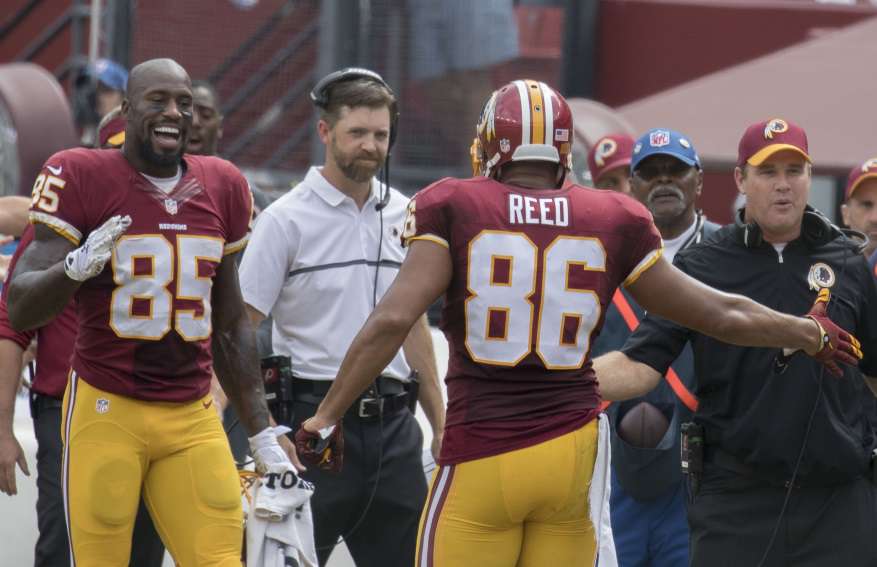 Drafting tight ends in best ball leagues always seems like a chore. You know you need them, but there’s sizable drop-off between the first three typically taken in drafts and everyone else. A similar process to drafting quarterbacks, drafting a TE in the right spot and justifying how many of the position you take will lead to a higher win percentage. Mike Beers (@beerswater) of the Bestball Command Center came up with a basic decision tree of how to draft TE’s. 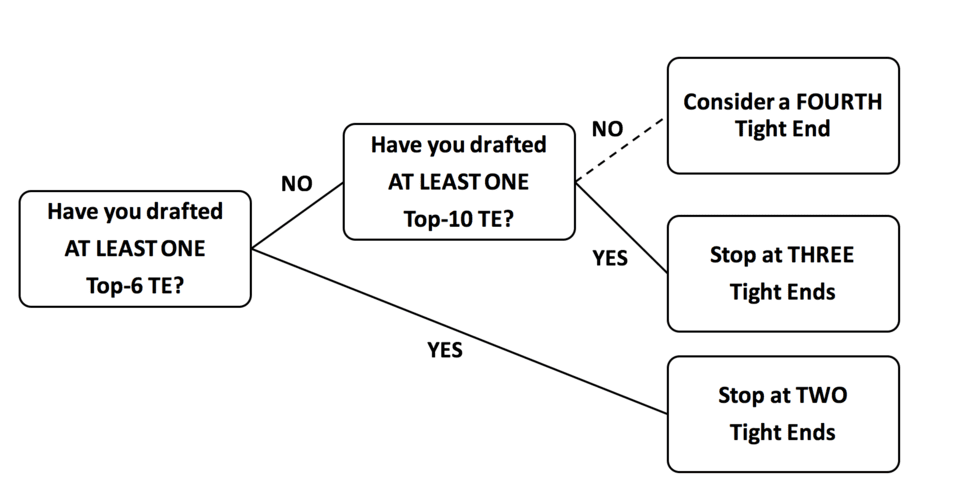 His article on the topic outlines when and how you should draft two or three TE’s in best ball formats depending on the draft capital used at the position. A key takeaway here is the use of ‘Top-6’ and ‘Top-10’ descriptors. Both characterize players that are either ranked within those categories or have those ranks in their range of outcomes.  Players within these ranges (from Rob Gronkowski to Greg Olsen) should be paired with at least one other TE. The farther down the list you wait, the more tight ends you may need to draft.

The objective is to cobble together enough top-12 weeks across your tight ends to improve your total score. A single top-6 TE should produce the majority of those performances on a weekly basis. The second TE can cover the bye week or the occasional floor game. A single top-10 TE will have less top-12 weeks. This creates the need for more players to be drafted at the position. It’s essentially a trade-off. Early TE’s require a sacrifice in high talent at positions of greater need (i.e. WR, RB) and late TE’s require a sacrifice of an extra roster spot. Either strategy is viable in best ball and there are some TE’s available late that can cover a few weeks in 2018. Five are highlighted here with their associated team situations.

Before we get into his team situation, let’s look at Njoku the player. He’s 6’4″-246 and tested in the 79th percentile or higher for every workout metric offered at the NFL Combine. To put it in perspective, he’s a larger, faster (and healthier) Jordan Reed. His 60 targets in 2017 were third in his class, but only 35 were considered catchable. Also noteworthy, was his usage in the deep passing game. Njoku received 15 deep targets (5th across all TE’s) generating 49.2% of his total production on these routes.

The Browns’ offense has been completely overhauled after the 2018 draft and free agency. Regardless of who starts at QB, the opposing defense will have to worry about the receivers and running backs out of the backfield. Njoku presents a size/speed mismatch that Cleveland can capitalize on with the added personnel. His production should take a step forward in 2018 making him a viable best ball target in the later rounds.

#Browns if tyrod taylor holds off baker mayfield as the starting QB, one player to watch in fantasy is second year tight end David Njoku. Taylor’s safety blanket is his tight end. pic.twitter.com/GZ64sNUQOz

Seals-Jones’ situation has more upside than his athletic profile. He’s fast for his size (6’5″-243, 4.69-40 time), but has below average skills once the ball’s in his hands. However, what do we care about in fantasy football? Volume. As the 2017 Cardinals went into crisis mode over injuries, Seals-Jones was one of the few left standing (literally). Ricky Seals-Jones was targeted on 41.2% of his routes run. That is the highest target percentage for TE’s in 2017. His 2018 situation hasn’t drastically changed either. The team jettisoned two of their wide receivers and replaced them with one receiver fitting the slot receiver archetype. With reports already surfacing of an expanded role, there’s a path to more targets for the converted wide receiver.

The Cardinals have historically been at the bottom of the league in TE targets. Their 16.9% target share was 8th worst in 2017. But, the story of the team wanting to ease David Johnson back into the receiving game after his wrist injury and lean on the positions writes itself. In this situation, those in best ball leagues need to value the situation, and possible workload, over the player and take the production.

Ricky Seals-Jones was the most productive receiving TE this week pic.twitter.com/PPoOBnt8BQ

In addition to targeting valuable players, drafters in best ball leagues tend to target valuable offenses. If a team projects to be in scoring position multiple times a game, more of their assets become viable in best ball. Even the cheapest piece of the offense still has a chance to hit on a weekly basis. That’s the case for Gerald Everett. His 2017 production doesn’t instill much confidence (16-244-2), but the Rams have multi-touchdown upside every week. There’s potential here, but Everett’s path to targets is somewhat unclear.

The Rams offense features three top-40 receivers and (arguably) the number one running back. In addition, tight ends only account for 17.2% of the team’s targets in 2017 (bottom third). Even more so, there’s another TE on the team that got more targets than Everett. However, Everett’s athletic talent far surpasses his teammates at the position and tight end is known for its longer transition period into the NFL. Everett comes virtually at no cost, on an ascending team, and already receiving positive reports during the offseason. There’s no need to be overweight on your exposure to him, but be sure to grab some best ball shares as he falls into the late rounds.

You’re drafting Vernon Davis in best ball leagues based on the assumption Jordan Reed misses games in 2018. Reed’s never had a full season in his five-year career and has suffered a myriad of injuries including multiple concussions and soft tissue strains. In Reed’s absence, the 34-year-old veteran has been moving around the field like he’s 24. Davis, still highly regarded as putting on one of the best performances at the NFL Combine, ran 95 routes out of the slot (31st) and racked up 246 yards from the position (9th). His game speed shows he can still outrun defenders and he’ll also see additional snaps as a potential blocker.

If you think Jordan Reed won’t make it through the season, draft Davis.

Dickson is a deep play in best ball leagues, but he has a few positives working in his favor. First, his routes run (359) were 21st in the league in 2017. Although the bulk of them came while Greg Olsen was on IR, it’s encouraging the team immediately moved to Dickson and he produced. Second, he ran the 10th most routes out of the slot with only one recorded drop. Finally, he’s joined a team with 176 targets up for grabs. Even if he grabs just 30% of those targets, that’s more than his previous years and moves him closer to top-20 value.

Seattle’s committed to the run, but their weaker defense will force them into passing game scripts. For a cheap 18-20th round draft price, you can buy a possible Jimmy Graham end zone replacement.

Rookie tight ends are always a risky proposition in best ball leagues. The position takes the longest to transition from college to NFL, but there have been some exceptions. But for every Evan Engram, there’s been a Hunter Henry or a Clive Walford land mine waiting in the mid to late rounds. The athletic tight ends are always enticing especially after the Combine, but we should exercise caution. The warning flags are already there for Mike Gesicki that bear monitoring over the summer. The constant news cycle should give us a better indication of what to expect and help set realistic expectations in the upcoming season.

Fire & Ice: And Miles To Go Before I Mikolas