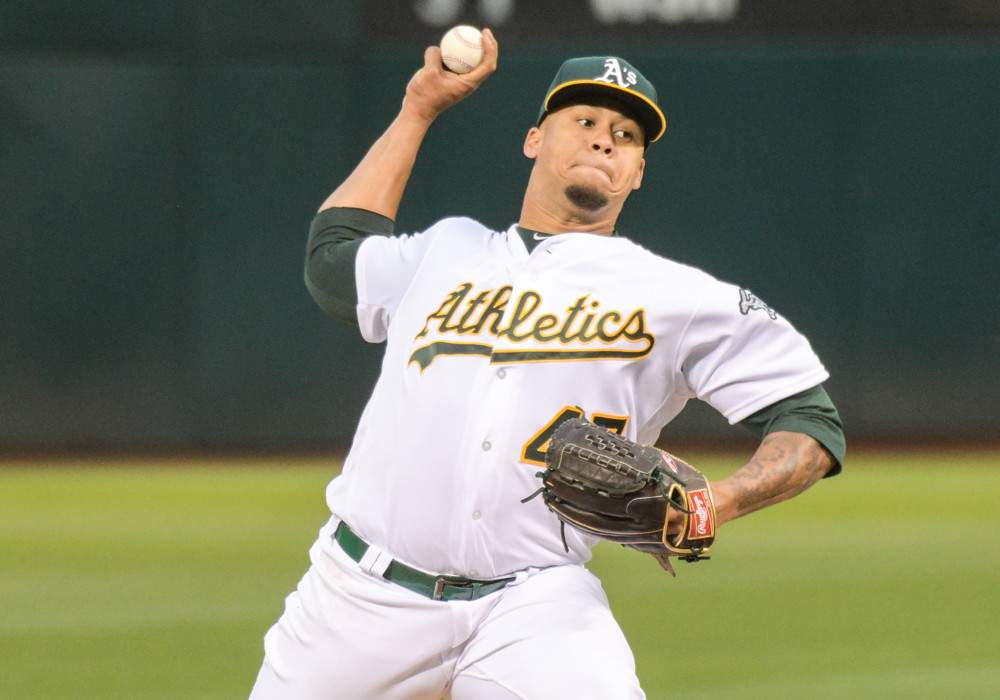 Based on the evolution of pitcher usage, the Quality Start (QS) is quickly becoming one of the most scarce resources in Fantasy Baseball. Over the last few seasons, many redraft and dynasty leagues are more commonly using Quality Starts as a reaction to the randomness of Wins.

Yet there is plenty of mystery around how exactly to make sense of the past, or accurately make predictions, about how a pitcher may earn Quality Starts. Whether you believe in the merits of the 6 IP, 3 ER statistic as a benchmark for success is another conversation. This deep dive into Quality Start data is meant to address some of those mysteries and help you strategize in your startup drafts or trade targets in order to build a winning team.

The data set used for this article was downloaded entirely from Fantrax. Please view or download the data set here for your reference or to make your own discoveries. I welcome continuing the conversation based on the analysis below.

If you aren’t playing your dynasty leagues on Fantrax, you’re missing out on the deepest player pool and most customization around. What are you waiting for? Start a league today!

First, it’s important to take a look at how the pitching landscape has evolved over the last few seasons.

We haven’t traditionally had much in the way of determining what makes for an effective Quality Start pitcher for fantasy baseball. We certainly have plenty of logical inferences that we could make: things like IP, IP per start, low WHIP, etc. I have sought to create a couple of metrics that can help quantify, and even hopefully predict, how you can target specific pitchers for Quality Starts.

I played with the numbers in Excel until something started to jump out. The first thing that stood out is what happened when I divided Innings Pitched (IP) by Quality Starts (QS). This ratio means how many innings does it take to earn a QS. This is a similar idea to At Bats per Home Run for hitters (AB/HR), which is how many AB does it take to hit a HR. It is better to have a lower IP/QS rate because it is more desirable to have a pitcher tally each QS in as few innings as possible.

If we were to use this statistic to predict QS for 2020 using 175 IP as a benchmark, the difference between the IP/QS rates for Frankie Montas and Walker Buehler equates to 21 QS (Montas) and 16 QS. This helps get a sense of the magnitude and how to use the statistic.

Here are some of the higher IP/QS rates from 2019 who are among the earliest pitchers drafted by ADP in 2020:

What is the Scale of IP/QS?

The definition of a QS is pitching six IP allowing three or fewer runs. Therefore, the start of the IP/QS scale is six. For example, a pitcher that throws exactly six IP and records one QS will have an IP/QS ratio of six.

Numbers in the sample ranged from 8.0 IP/QS (Frankie Montas) to 121.1 IP/QS (Wade LeBlanc) in 2019. LeBlanc started 1 of 8 appearances he made in 2019, so he recorded one QS in his 121.1 IP of work. Similarly, Drew Pomeranz had 104 IP/QS, because even though he started 18 G, he recorded one QS in his 104 total IP (he also ended up in the bullpen midseason). It’s important to realize that pitchers like LeBlanc and Pomeranz will have very high IP/QS because they are not a traditional, SP1-SP5 rotation arm.

Generally speaking though, pitchers that start less than 80% of their games tend to post significantly higher IP/QS figures (exceptions to this discussed below).

To learn more about IP/QS behaves, it’s easier to handpick some examples and examine each individual case. 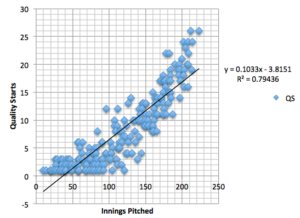 Compiling the data graphically, it reveals some interesting information.

I looked at data samples from 2016-2019 and created four similar graphs. Here are the trend line equations for each season graphically between 2016-2019.

Over the four years of data, the trend lines were remarkably similar (pictured below). The strength of the correlation (R^2 value) has gone down slightly over the last four years but remains relatively strong. 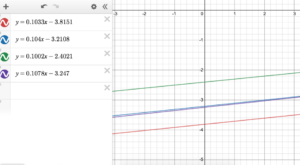 We could generalize a league average equation using trend line averages from the last four years to get the equation:

Take any IP, multiply it by 0.1 (or divide by 10), and subtract by 3 to get the expected number of QS. For example, using 180 IP, we would expect, on average across the league, a pitcher to generate 15 QS.

The trend line equation above has a few very important applications:

Using the trend line above, you can examine how pitchers differ from the league average based on the number of IP.

It also measure degree, meaning that some pitchers are far from the line or close to the line in either direction. The math is simple to calculate the degree: Actual QS – Expected QS.

Here is an assortment of nearly 40 pitchers using 2019 data, sorted by descending QS-ExQS.

There is still so much work to be done with studying Quality Starts. If you have any ideas, comments, please reach out to me via Twitter @TBDubbs11 or by email at [email protected]. If you would like to examine the data set, please follow the link here. Let’s keep the conversation going about this work so that we can make it grow: this is only the beginning!

Ben Wilson is a member of the FantraxHQ team as a Minor League Prospect Analyst and Dynasty Fantasy Baseball writer. Ben’s work can also be found on Prospects1500.com and formerly on Real McCoy Minors News. Ben is also a member of the Internet Baseball Writers Association of America (IBWAA). For more content from Ben, follow him on Twitter @TBDubbs11.