4 Late-Round Fliers that Could Pay Off Big in 2021 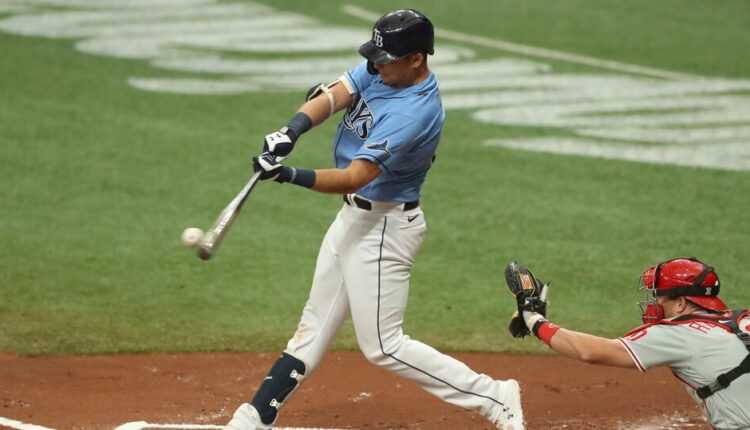 Think back to the 2020 draft season; it is late in the draft, your fantasy baseball team is shaping up nicely, and the next thing you know, you’re deciding between an enticing group of late-round fliers. Your season probably went very well if you took post-300 ADP players like Teoscar Hernandez or Mike Yastrzemski. And on the other side, you were probably scrambling to replace players like Aristides Aquino or Miles Mikolas, both players taken around a 300 ADP that didn’t perform as hoped.

We spend countless hours researching areas like hard-hit rates, spin mirroring, and even changes to baseball. All that painstaking effort can be worth it if our late-round dart hits the bullseye. It’s truly a walk-off feeling to take a player late that outperforms their draft slot.

This article will narrow down the focus to just corner infielders-specifically with an ADP of 300 or later. The positional eligibility will be based on the NFBC, and the ADP is from February 1 till the present. Enjoy!

Isiah Kiner-Falefa was an intriguing player to draft last season due to his lingering catcher eligibility. Sadly that has been stripped away from him. However, he did get enough appearances to gain shortstop and third base eligibility; hence why he is here.

There is a glaring problem that has plagued Kiner-Falefa, and the reason he gets pushed down draft boards. No matter how hard you try to ignore it, it is impossible. Kiner-Falefa doesn’t hit home runs. His barrel% was under 3% for the third straight season, and the launch angle continues to plummet. So why am I suggesting him as a corner infielder to target?

Stolen bases! Kiner-Falefa likes to use his 28.1 ft/s sprint speed(81st percentile) to take a base when given the opportunity. For a point of reference, the league average spring speed is 27.0 ft/s, and he was the third-fastest third baseman. In 228 plate appearances, Kiner-Falefa stole eight bases, tied for the 17th most in a very hard-to-find category.

Another solid component of Kiner-Falefa’s game is his fielding. He was awarded the Gold Glove last year for stellar defense. Texas will get him on the field as much as possible, which is good news because it means plenty of at-bats.

If you have built a team on pitching and early power, Kiner-Falefa might be the corner infielder for you. He has shown the ability not to destroy your batting average while contributing chipping in stolen bases. If he could start elevating the ball more, maybe his game would take off to the next level.

For some time, we have been chanting, “Free Nate Lowe.” Well, in 2021, we finally get our wish! The Rangers acquired Lowe via trade in December, and this move should make way to full-time plate appearances. RosterResource currently has Lowe planted in the middle of the Rangers lineup with no platoons at first base-so we should expect him to get over 500 plate appearances.

The main reason we wanted to see Lowe of out Tampa Bay is that he hammers baseballs. If you looked at just his max exit velocity (114.8 MPH), Lowe had the third-highest of all first basemen with at least one batted ball event. He also had a 15.4% barrel rate and 44.8% hard-hit rate. It’s safe to say when Lowe makes contact-the ball goes far.

The cautionary tale of this masher? He strikes out far too much. In two very brief stints in the majors, Lowe carries a strikeout rate over 30% in both. This won’t help his batting average, which could crater if the strikeouts pile up.

Projection systems have Lowe around a .250-.260 batting average with 20 home runs and near 120-130 runs+RBI. If you have built a team with adequate speed and a safe batting average floor, Nate Lowe blast you to great heights.

There is a cult-like love for C.J. Cron in the fantasy baseball community. The man is a barrel machine! Since 2015, Cron has barreled 180 balls, and that’s not really with full-time plate appearances. As you can see below, Cron continues to make great contact with the baseball. When you barrel a ball this often, good outcomes usually follow-especially if his flyball rate stays above 40%.

I fully expect Cron’s ADP to continue to climb as more find out about him heading to Coors Field, the mecca of offense. Until now, Cron’s home ballparks have been stadiums that are far less favorable to hitters. Getting back to the Coors effect on batters, the park has shown to have the highest BABIP of all MLB parks. This could bode very well for Cron’s batting average as well.

Projections look very kind to Cron as well. We should expect somewhere in the range of 25-plus home runs and 140-150 runs+RBI, and a solid batting average. He won’t steal you any bases, but the potential for a mega return on investment will always have me coming back to Cron as a corner infielder flier.

Evan White is such an intriguing corner infielder. Let’s take a glance at his statcast slider to see why he may have the biggest upside of any of these late-round fliers. 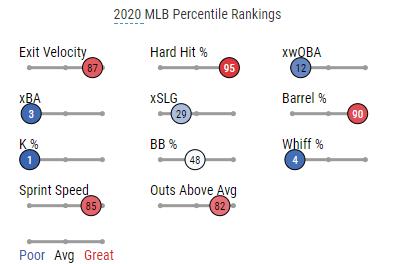 What makes White so interesting is the tools on display. First, a first baseman within the 85th percentile is rare. In fact, last season, Evan White was the fastest first baseman in MLB. Now let’s add that speed to his 90th percentile barrel%, 95th percentile hard-hit%, and 87th percentile in exit velocity. Very fast and hits the ball very hard; he sounds like a great player on your roster. Oddly, outside of eight HRs, he did not produce results indicative of these skills.

White’s biggest deterrent from a productive 2020 was the enormous 41.6% strikeout rate. At times, White looked overmatched and whiffing that many times submarined his batting average. Keep in mind; last year was the first time this 24-year old prospect had played above the double-A level. There is a world of room for growth in this area as White gets more acclimated.

Evan White is a wildcard play. He didn’t steal many bases in the minor leagues, but he has the speed to do so. White showed he could crush baseballs when he makes contact, I’ll repeat, when he makes contact. The high strikeout rate will suppress his batting average and stunt his value. He can go in so many different directions; if he can put all the tools together, it could be a colorful season for White.

Are you on board with Dave’s late-round fliers? For more great rankings, strategy, and analysis check out the 2021 FantraxHQ Fantasy Baseball Draft Kit. We’ll be adding more content from now right up until Opening Day!

Second Base Tiers: Only The Real Strong Survive